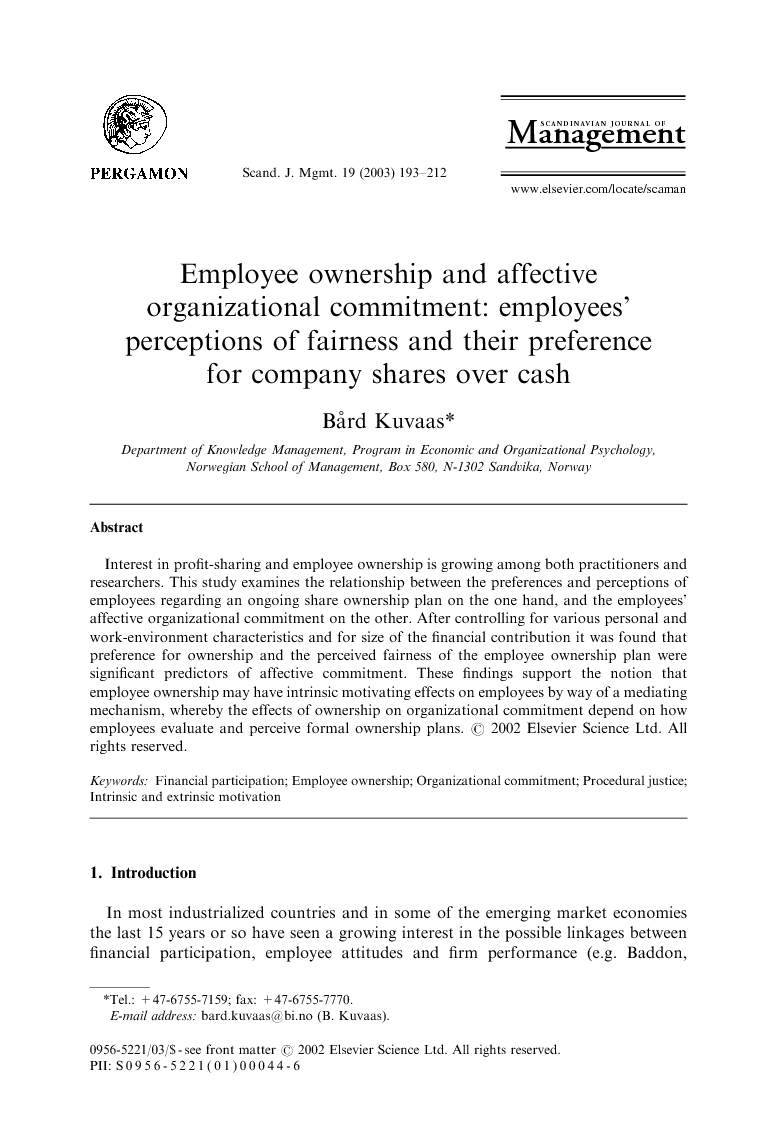 Interest in profit-sharing and employee ownership is growing among both practitioners and researchers. This study examines the relationship between the preferences and perceptions of employees regarding an ongoing share ownership plan on the one hand, and the employees’ affective organizational commitment on the other. After controlling for various personal and work-environment characteristics and for size of the financial contribution it was found that preference for ownership and the perceived fairness of the employee ownership plan were significant predictors of affective commitment. These findings support the notion that employee ownership may have intrinsic motivating effects on employees by way of a mediating mechanism, whereby the effects of ownership on organizational commitment depend on how employees evaluate and perceive formal ownership plans.

In most industrialized countries and in some of the emerging market economies the last 15 years or so have seen a growing interest in the possible linkages between financial participation, employee attitudes and firm performance (e.g. Baddon, Hunter, Hyman, Leopold, & Ramsay, 1989; Bradley & Smith, 1992; Jones & Pliskin, 1997; Langeland, 1999; Pendleton, Wilson, & Wright, 1998; Smith, 1988). A great many different formal arrangements fall under the general rubric of financial participation. The specific employee ownership plan to be examined below implies that employees receive company-wide profit-based bonuses once a year in the form of company stock. The plan can thus be characterized as an organization-wide collective incentive scheme that combines profit-sharing and employee ownership. This type of financial participation seems able to generate favourable employee attitudes and behaviour, without evoking many of the problems that critics have often associated with financial reward systems. First, a plan of this kind involves no extra control of individual work behaviour. There is consequently little risk that the incentive system will reduce the recipients’ perceived self-determination or competence, either of which outcome could undermine their intrinsic motivation (e.g. Deci, Ryan, & Koestner, 1999; Kohn, 1993a). Further, as an organization-wide incentive system, it focuses on organizational rather than individual gains, and is thus more likely to encourage cooperation than to provoke sub-optimal internal competition (e.g. Kendrick, 1987; Kohn, 1993b). Finally, the very fact of ownership is thought to increase employee commitment to the organization by establishing long-term common interests with the employer or owner. This type of financial participation is thus often seen as a useful mechanism for enhancing corporate morality and loyalty, supporting a feeling of partnership, psychological attachment, teamwork, cooperation and work effort, as well as reducing costs, all of which in turn have a positive implication on organizational performance and competitiveness (e.g. Pendleton et al., 1998). To date, however, the idea that ownership as such has a motivating effect on employees has received little empirical support. Psychological and econometric employee ownership research both seem to suggest that it is not ownership in itself, but the size of the financial reward it provides that is important (Bell & Hanson, 1984; French, 1987; Klein & Rosen, 1986; Klein, 1987; Kruse, 1993). Further, the lack of support for intrinsic feelings of ownership has been taken as evidence that intrinsic motivation is of limited use in explaining the relationship between ownership and attitude (e.g. Buchko, 1992; Klein, 1987). An alternative interpretation of these findings is that the ownership arrangements studied in most research up to now have not succeeded in engendering psychological or perceived ownership in the minds of the employees. According to Pierce, Rubenfeld, and Morgan (1991), the degree to which employee ownership generates social-psychological or behavioural effects depends on how the employees evaluate and perceive the ownership arrangements (Pierce et al., 1991). In the present study I explore the intrinsically motivating potential of employee ownership by investigating the relationship between ownership-related preferences and organizational commitment. More specifically, the research question concerns the employees’ preferences as regards ownership (i.e. shares in the company versus cash) and the perceived fairness of the ownership plan, and how these are related to their affective organizational commitment. The size of the ownership contribution is controlled for. In addition, since affective organizational commitment is influenced by a number of individual and contextual factors (see Iverson & Buttigieg, 1999), several personal variables (age, sex, education, tenure and basic pay) and work-environment variables (the social work-environment and organizational support) are also included as control variables. The rest of the paper is organized as follows. I first define affective commitment and report briefly on some relevant research on organizational commitment. I then review earlier employee ownership research and derive two hypotheses that will be tested in the empirical investigation, after which I describe the research methodology and report the results. Finally, I discuss the findings and address their implications for theory and practice.

In order to estimate separate effects for the control variables and the two independent variables, hierarchical multiple regression analyses were employed to test the hypotheses (Cohen & Cohen, 1983). Affective commitment was first predicted by the personal and work-environment variables (model 1), followed by ownership preferences (model 2), and finally by the fairness of the employee ownership plan (model 3). The differences in explained variance were tested by F-tests of changes in R2 between the three models, a procedure that accounts for the degrees of freedom. Prior to the analyses, pairwise and multiple variable collinearity were inspected by collinearity diagnostics in SPSS. Table 3 shows the result of the hierarchical regression analyses. In support of Hypothesis 1, ownership preferences were positively and significantly related to affective organizational commitment (β=0.28,p<0.01), and remained so after the perceived fairness of the employee ownership plan was partialled out (β=0.26,p<0.01). The fairness of the ownership plan was also positively and significantly related to affective commitment (β=0.30,p<0.01), providing support for Hypothesis 2. Among the control variables, social environment was the only significant predictor in the full model (β=0.23,p<0.05). An inspection of changes in R2 reveals that the addition of ownership preferences to the control variables increased the explained variance in affective commitment by 7 per cent (model 2), and that the addition of the fairness of the ownership plan increased it by another 6 per cent (model 3).