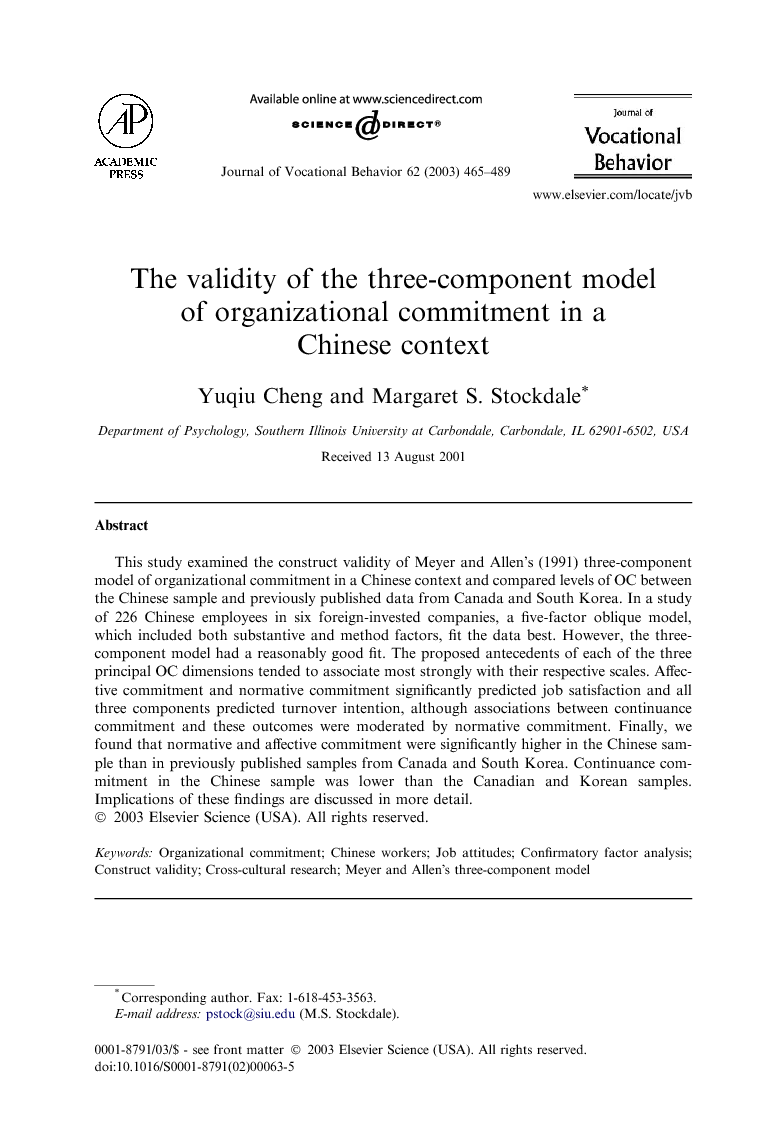 This study examined the construct validity of Meyer and Allen’s (1991) three-component model of organizational commitment in a Chinese context and compared levels of OC between the Chinese sample and previously published data from Canada and South Korea. In a study of 226 Chinese employees in six foreign-invested companies, a five-factor oblique model, which included both substantive and method factors, fit the data best. However, the three-component model had a reasonably good fit. The proposed antecedents of each of the three principal OC dimensions tended to associate most strongly with their respective scales. Affective commitment and normative commitment significantly predicted job satisfaction and all three components predicted turnover intention, although associations between continuance commitment and these outcomes were moderated by normative commitment. Finally, we found that normative and affective commitment were significantly higher in the Chinese sample than in previously published samples from Canada and South Korea. Continuance commitment in the Chinese sample was lower than the Canadian and Korean samples. Implications of these findings are discussed in more detail.

A variety of studies have been conducted to explore the concept of organizational commitment (OC) (e.g., Becker, 1960; Mowday, Porter, & Steers, 1982), to examine the validity of different measures of organizational commitment (e.g., Allen & Meyer, 1996; Hackett, Bycio, & Hausdorf, 1994), and to investigate the relations between organizational commitment and its antecedents and outcomes (e.g., Allen & Meyer, 1990; Buchko, Weinzimmer, & Sergeyev, 1998). Although there have been several definitions and measures of OC (e.g., Becker, 1960; Meyer and Allen, 1984 and Meyer and Allen, 1991; Porter, Steers, Mowday, & Boulian, 1974), Meyer and Allen’s (1991) three-component model of OC has been the dominant framework for OC research in the past decade because it is based on a more comprehensive understanding of OC. The three-component model consists of: (a) affective commitment [AC, an emotional attachment to one’s organization, similar to Porter et al.’s (1974) conceptualization]; (b) continuance commitment (CC, attachment based on the accumulation of valued side bets such as pension, skill transferability, relocation, and self-investment that co-vary with organizational membership); and, (c) normative commitment (NC, attachment that is based on motivation to conform to social norms regarding attachment). Common to these three components is the view that commitment is a psychological state that characterizes the employee’s relation with the organization, and has implications for the decision to continue or discontinue membership in the organization (Meyer & Allen, 1991). In addition, cross-cultural studies of organizational commitment have been conducted in many countries such as Canada, Great Britain, Belgium, Australia, Russia, South Korea, Japan, Singapore (e.g., Ko, Price, & Mueller, 1997; Lee, Allen, Meyer, & Rhee, 2001; Vandenberghe, 1996). With increasing globalization and awareness of cultural issues that bear on social, cognitive, and attitudinal issues in the workplace (e.g., Hofstede, 1980a), extending research on organizational commitment to other borders is important. The current research examines the construct validity of Meyer and Allen’s (1991) three-component model of OC in China, the world’s largest population center.