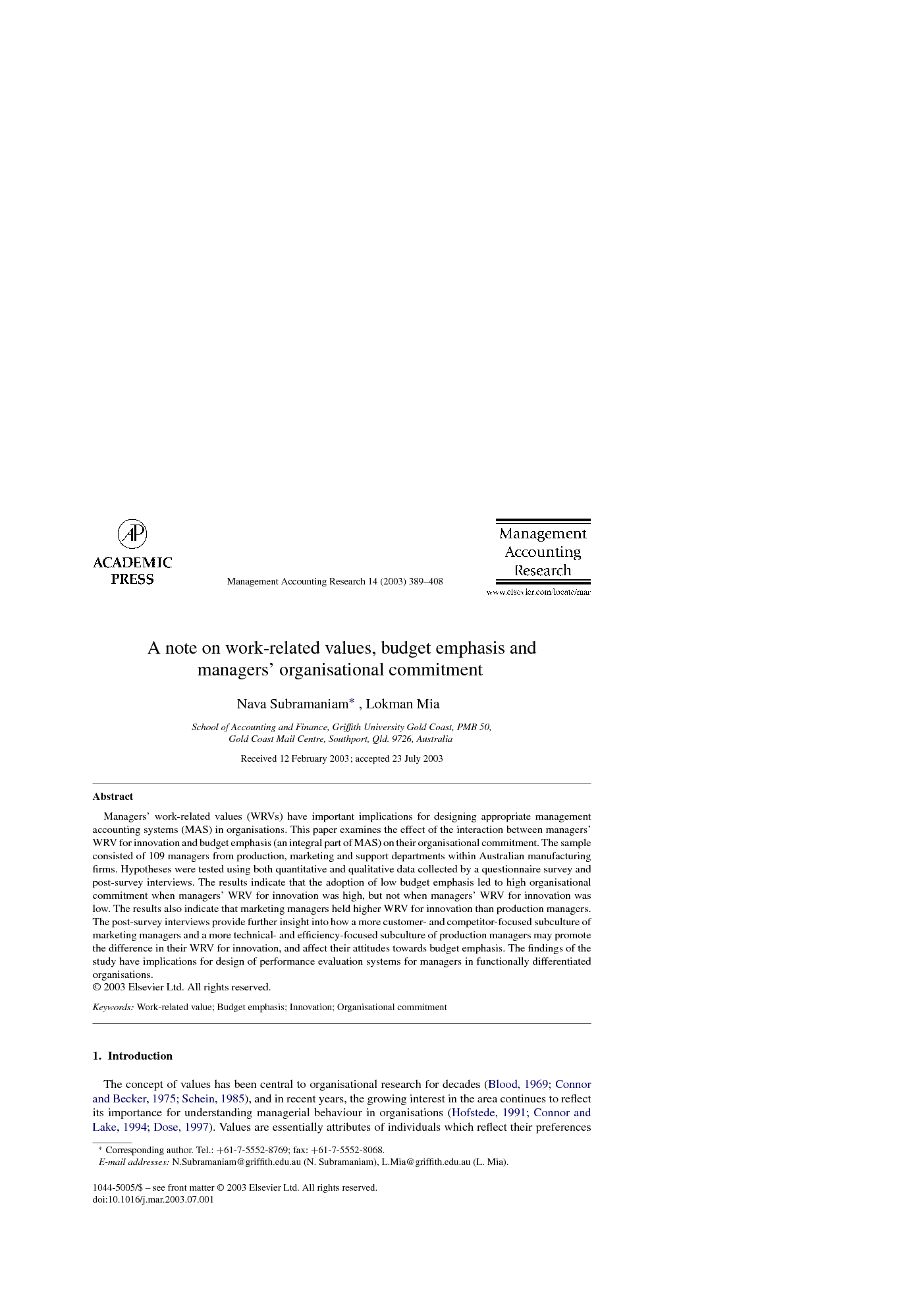 Managers’ work-related values (WRVs) have important implications for designing appropriate management accounting systems (MAS) in organisations. This paper examines the effect of the interaction between managers’ WRV for innovation and budget emphasis (an integral part of MAS) on their organisational commitment. The sample consisted of 109 managers from production, marketing and support departments within Australian manufacturing firms. Hypotheses were tested using both quantitative and qualitative data collected by a questionnaire survey and post-survey interviews. The results indicate that the adoption of low budget emphasis led to high organisational commitment when managers’ WRV for innovation was high, but not when managers’ WRV for innovation was low. The results also indicate that marketing managers held higher WRV for innovation than production managers. The post-survey interviews provide further insight into how a more customer- and competitor-focused subculture of marketing managers and a more technical- and efficiency-focused subculture of production managers may promote the difference in their WRV for innovation, and affect their attitudes towards budget emphasis. The findings of the study have implications for design of performance evaluation systems for managers in functionally differentiated organisations.

The findings of this study contribute to the management accounting literature examining the design of MAS in functionally differentiated organisations. The study highlights the role that individual managers’ WRV for innovation may have in designing appropriate MAS in functionally differentiated organisations. Our results suggest that in case of marketing managers, more flexible, rather than a rigid budget-based performance evaluation style of performance evaluation would be more congruent for their commitment to their organisations. This is because these managers hold relatively high WRV for innovation and prefer rather less budget emphasis as is revealed by our test of H2 and H3. The use of both quantitative and qualitative data is a strength for this study as the post-survey interviews provide a rich insight into the factors affecting managers’ WRV for innovation and their attitudes to budget emphasis. The results of the study, however, should be considered in light of its limitations. First, the usual limitations of cross-sectional survey research, namely data collected at a single point in time. A longitudinal study may aid in understanding how organisational subcultures and managerial WRV develop across different functional units within organisations and how such values may affect the relation between budget-based and other accounting-based control systems and managers’ job-related outcomes. Second, the study focuses on managers’ WRV for innovation only. Future research could focus on other dimensions of managerial WRV, particularly those identified by O’Reilly et al. (1991), e.g. the WRV for detail-orientation, team-orientation, and aggressiveness. Third, a combination of MAS features particularly in terms of their interactive role may better explain the relationship between MAS and managerial job-related outcomes. It is evident that organisations rely on combinations of accounting and non-accounting-based controls in any given setting, yet little empirical work has been undertaken in examining this rather complex issue. Notwithstanding these limitations, the results of the study provide clear evidence in support of prior research relating to MAS design in functionally differentiated organisations. The present study illustrates that MAS design needs to consider managers’ WRV if its benefits are to be realised. The study contributes a further nomographic validation of the influence of individual WRV for innovation on the effectiveness of budget emphasis and managerial job-related outcomes.