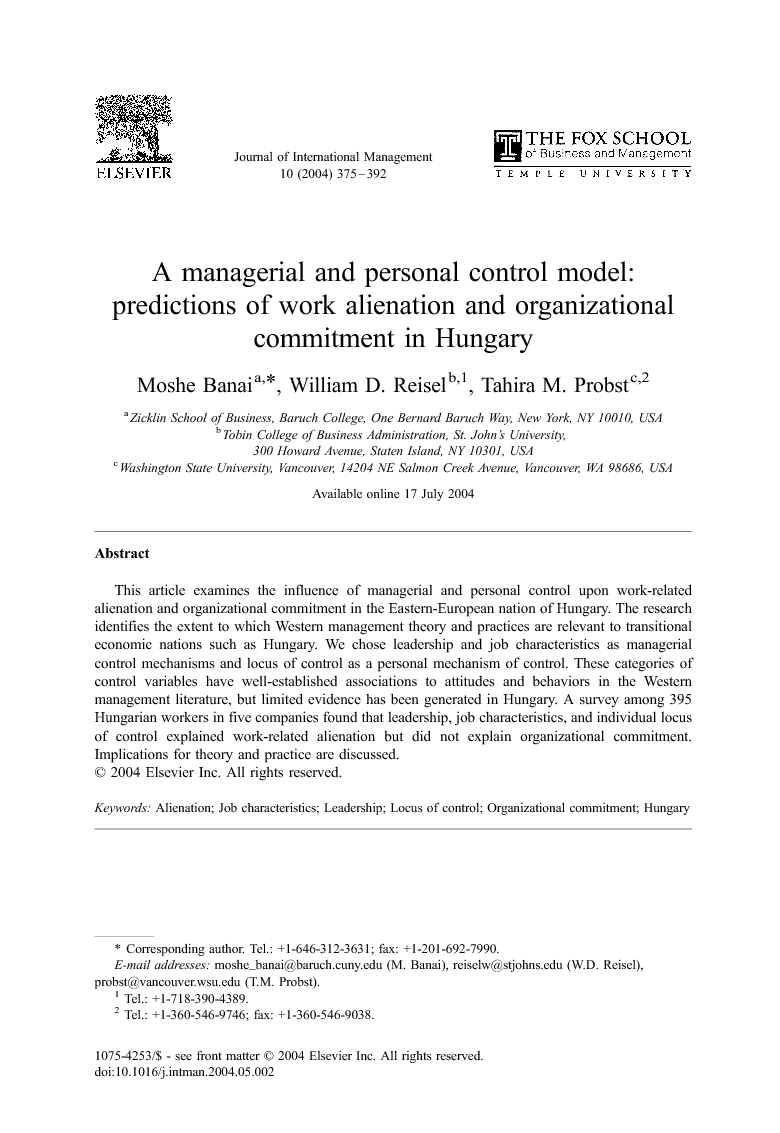 This article examines the influence of managerial and personal control upon work-related alienation and organizational commitment in the Eastern-European nation of Hungary. The research identifies the extent to which Western management theory and practices are relevant to transitional economic nations such as Hungary. We chose leadership and job characteristics as managerial control mechanisms and locus of control as a personal mechanism of control. These categories of control variables have well-established associations to attitudes and behaviors in the Western management literature, but limited evidence has been generated in Hungary. A survey among 395 Hungarian workers in five companies found that leadership, job characteristics, and individual locus of control explained work-related alienation but did not explain organizational commitment. Implications for theory and practice are discussed.

The degree to which Western research findings may be extended to differing cultural, national, economic, and managerial contexts remains one of the most active areas of inquiry within cross-national research over the past decade. The Central and Eastern-European countries (CEE) are among those nations with substantial prima facie differences from Western-developed nations, such as the United States and powerful European Union nations. One observer wrote that Hungarian workers “have to adjust to a complex and unprecedented environmental change without any recipe or well-tried routines to guide them. Hungary…could be treated as the scene of a large-scale experiment in organizational and individual adjustment” (Markóczy, 1994, p. 6). How well transitional CEE nations respond to their environmental challenges may be a function of whether Western-country-derived managerial models may be readily applied without substantive modification. This issue is poignant as foreign capital flows into Hungary continue to require managerial response to risk issues given that only 70% of 1044 surveyed Hungarian firms were profitable in 1995 as opposed to 95% of firms in the United States (Pohl et al., 1997). The tendency for quick-fix solutions, such as expatriate management appointments and parochial human resources policies, has a limited empirical basis. There is little clarity, for example, on how to effectively stimulate individual motivation and pro-organizational attitudes within a competitive market framework in Hungary (Fogel and Zapalska, 2001). To address the issue, the present study focuses its attention on the influence of both managerial and personal control mechanisms upon the organizational attitudes of work-related alienation and organizational commitment. We chose leadership and job characteristics as managerial control mechanisms and locus of control as a personal mechanism of control specifically, given their associations with employee well-being (Spector et al., 2002). For example, leadership theories converge on the view that leaders have a positive effect on subordinate motivation and pro-organizational attitudes Fiedler, 1967, Fiedler, 1996, Hersey and Blanchard, 1993 and Liden and Maslyn, 1998. Specifically, our interest in leadership was to examine those behaviors that describe a supportive leadership style (i.e., cooperative goal setting, providing performance standards, supporting staff initiative, delegating, and rewarding) recommended in the Western management literature. Similarly, meta-analytic evidence of job characteristics research has shown that job characteristics are related to attitudes such as satisfaction and employee well-being (Spector, 1986). In addition, control at the personal level, referred to as locus of control, is among only a few variables with clearly established cross-national validity and is associated with positive attitudes and adjustment to psychological strain, as shown in a recent meta-analysis across 24 geopolitical locations on all five continents (Spector et al., 2002). We present the theoretical background and research hypotheses in the next section.