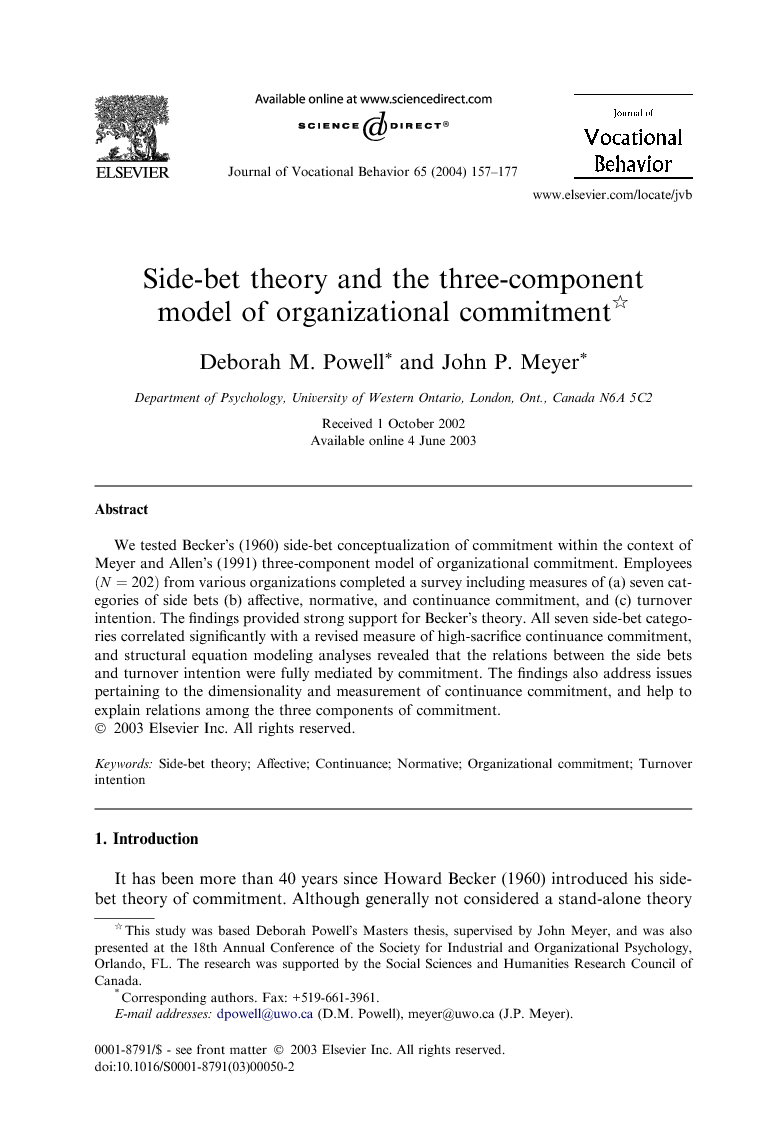 We tested Becker’s (1960) side-bet conceptualization of commitment within the context of Meyer and Allen’s (1991) three-component model of organizational commitment. Employees (N=202) from various organizations completed a survey including measures of (a) seven categories of side bets (b) affective, normative, and continuance commitment, and (c) turnover intention. The findings provided strong support for Becker’s theory. All seven side-bet categories correlated significantly with a revised measure of high-sacrifice continuance commitment, and structural equation modeling analyses revealed that the relations between the side bets and turnover intention were fully mediated by commitment. The findings also address issues pertaining to the dimensionality and measurement of continuance commitment, and help to explain relations among the three components of commitment.

It has been more than 40 years since Howard Becker (1960) introduced his side-bet theory of commitment. Although generally not considered a stand-alone theory of organizational commitment today, it continues to be influential as a result of its incorporation into popular multi-dimensional models of organizational commitment, including Meyer and Allen, 1991 and Meyer and Allen, 1997 three-component model. Becker described commitment as a tendency to engage in “consistent lines of activity” (p. 33), and argued that it develops as a “person finds that his involvement in social organization has, in effect, made side bets for him and thus constrained his future” (p. 36). Meyer and Allen (1991) referred to this form of commitment as continuance (cost-based) commitment, and included it along with affective (desire-based) and normative (obligation-based) commitment in their three-component model. Becker’s (1960) side-bet theory has been tested on numerous occasions with mixed results (e.g., Alluto, Hrebiniak, & Alonso, 1973; Hrebiniak & Alutto, 1972; Ritzer & Trice, 1969). Unfortunately, the research has been plagued with methodological problems (Cohen & Lowenberg, 1990; Meyer & Allen, 1984; Shore, Tetrick, Shore, & Barksdale, 2000), so that, after 40 years, questions about its validity remain. Although the measure of continuance commitment developed by Meyer and Allen, 1984 and Allen and Meyer, 1990 to test their three-component model has been found to correlate with variables akin to side bets (see Allen & Meyer, 1996; Meyer, Stanley, Herscovitch, & Topolnytsky, 2002), research to date has been limited. Moreover, there is some question about whether this measure accurately reflects commitment as conceptualized by Becker (Ko, Price, & Mueller, 1997; McGee & Ford, 1987). The present study addressed the methodological problems in earlier studies and provides a more adequate test of Becker’s (1960) side-bet theory within the context of Meyer and Allen’s (1991) three-component model. The findings have implications for both side-bet theory and the three-component model. The two are described briefly below. We then review previous research, with an emphasis on methodological limitations. Finally, we provide a more detailed discussion of our objectives, and state our hypotheses.

The first step in our analysis was to evaluate the dimensionality, reliability, and construct validity of the revised CCS. To assess dimensionality, we conducted confirmatory factor analyses, with maximum likelihood estimation, using AMOS 4.01 (Arbuckle, 1999). We compared the fit of the single-factor model originally proposed by Meyer and Allen (1984) and the two-factor model (high sacrifice and low alternatives) suggested by McGee and Ford (1987) using the Comparative Fit Index (CFI: Bentler, 1990) and the Root Mean Square Error of Approximation (RMSEA: Steiger, 1990) as criteria. CFI values greater than .90 are generally taken as evidence of good fit; RMSEA values less than .05 indicate good fit, values between .05 and .08 moderate fit, values between .08 and .10 mediocre fit, and values greater than .10 poor fit (Browne & Cudeck, 1993). We then conducted reliability analyses on the CCS and its subscales, and examined correlations with turnover intention as evidence of construct validity. The two-factor model (χ2=70.49, df=26, p<.01, RMSEA=.092, CFI=.986) fit the data better than the single-factor model (χ2=264.76, df=27, p<.01, RMSEA=.209, CFI=.926). The correlation between the factors in the two-factor solution was .39. When we created subscales based on this analysis (i.e., CC:HiSac and CC:LoAlt), we found both to have high levels of internal consistency (α=.81 and .85, respectively). Of the two subscales, only CC:HiSac correlated significantly with turnover intention (r=−.42, p<.01). This is consistent with previous research (Meyer et al., 2002) and suggests that the high-sacrifice subscale best reflects side-bet (continuance) commitment as conceptualized by Becker (1960). For purposes of hypothesis testing, therefore, we used only the six-item CC:HiSac subscale.