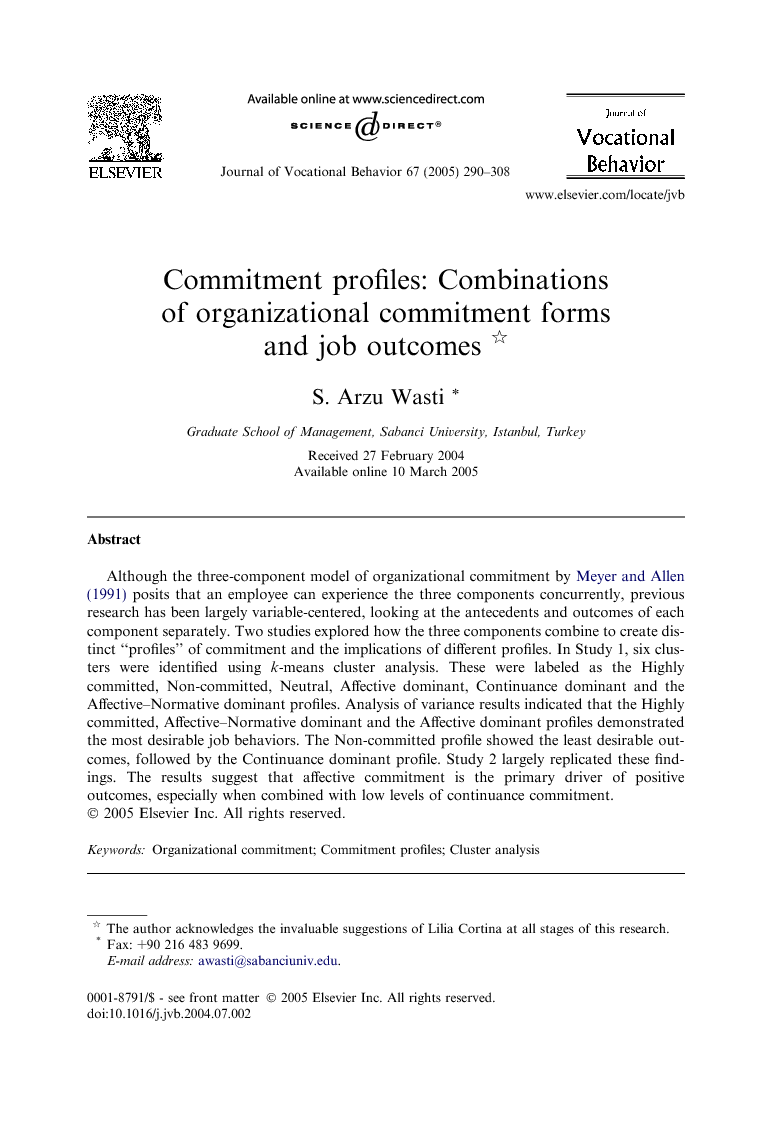 Although the three-component model of organizational commitment by Meyer and Allen (1991) posits that an employee can experience the three components concurrently, previous research has been largely variable-centered, looking at the antecedents and outcomes of each component separately. Two studies explored how the three components combine to create distinct “profiles” of commitment and the implications of different profiles. In Study 1, six clusters were identified using k-means cluster analysis. These were labeled as the Highly committed, Non-committed, Neutral, Affective dominant, Continuance dominant and the Affective–Normative dominant profiles. Analysis of variance results indicated that the Highly committed, Affective–Normative dominant and the Affective dominant profiles demonstrated the most desirable job behaviors. The Non-committed profile showed the least desirable outcomes, followed by the Continuance dominant profile. Study 2 largely replicated these findings. The results suggest that affective commitment is the primary driver of positive outcomes, especially when combined with low levels of continuance commitment.

Prior to the cluster analysis, the revised organizational commitment scales were validated using confirmatory factor analysis. The three-factor model was found to be significantly better than all other models (χ2/df = 2.24; GFI = .97; AGFI = .94; CFI = .97, RMSEA = .06). Next, a measurement model was fitted to the sample using all scales. The results indicated a satisfactory fit (χ2/df = 1.81; GFI = .93; AGFI = .90; CFI = .96, RMSEA = .05). Table 2 provides factor loadings obtained for the multi-item indicators created for each latent variable. As described in Study 1, the commitment items were summed into scale scores; each scale score was standardized and submitted to k-means cluster analysis. To provide a comparable replication, the 6-cluster solution was chosen over the 7- and 8-cluster solutions (which also yielded unacceptably lower cell sizes [e.g., n = 6] and in certain instances, less clear profiles). As can be seen in Fig. 2, the results display considerable similarity to Study 1. Again, one group’s profile is characterized by below average levels of affective, normative and continuance commitment (the “Non-committed” [n = 59]) and another group consists of individuals with above average levels of affective, normative as well as continuance commitment (the “Highly committed” [n = 82]). Four other profiles emerged between these two extremes with three of these profiles mimicking those obtained in Study 1: The CC-dominant (n = 51), the AC-dominant (n = 37) and the AC–NC dominant (n = 57). The only profile that is different than Study 1 is the group consisting of individuals who displayed below average levels of affective commitment, but above average levels of continuance and normative commitment (n = 50). This group was thus labeled as the “Normative-Continuance dominant” profile (NC–CC dominant).