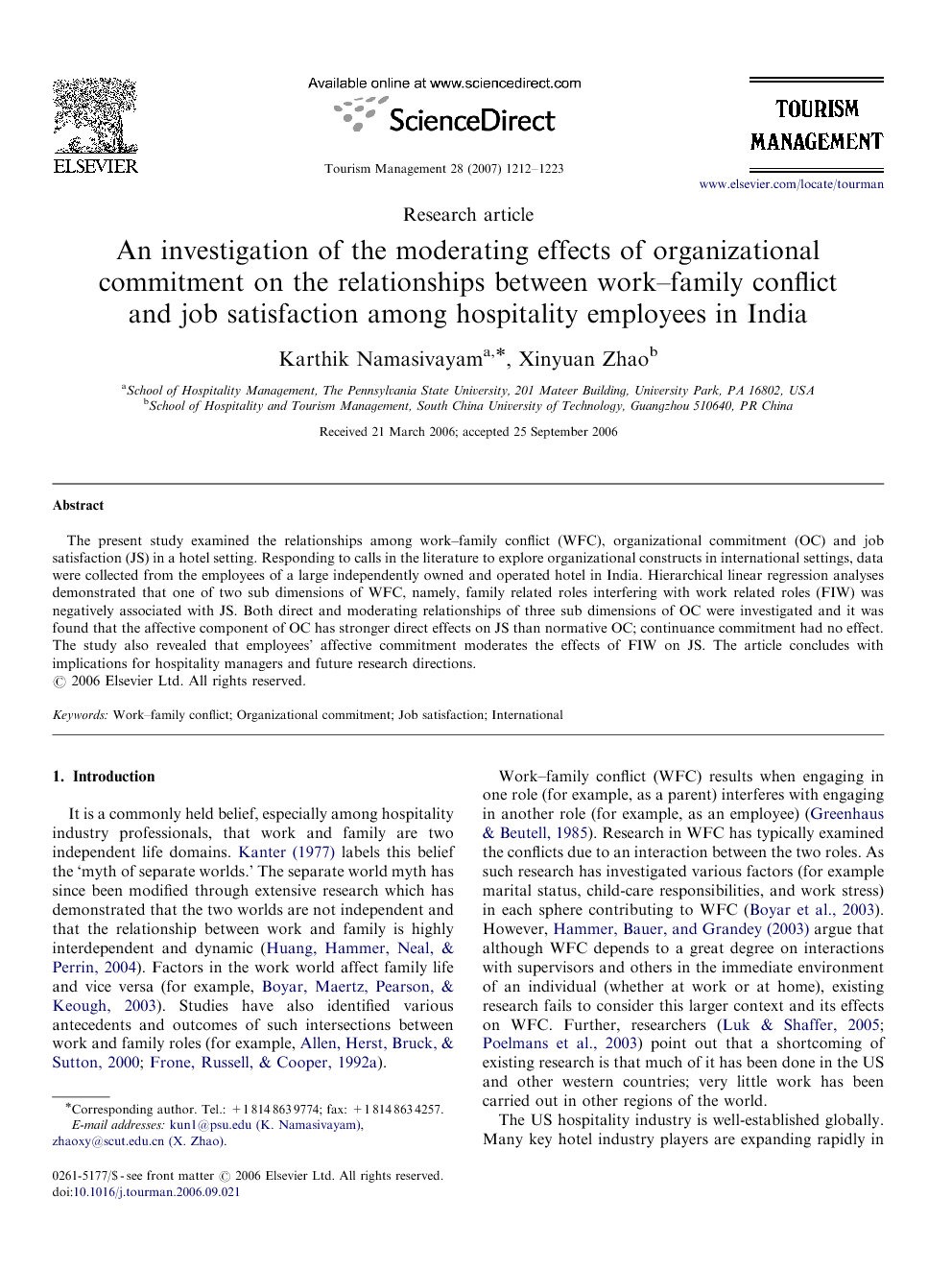 The present study examined the relationships among work–family conflict (WFC), organizational commitment (OC) and job satisfaction (JS) in a hotel setting. Responding to calls in the literature to explore organizational constructs in international settings, data were collected from the employees of a large independently owned and operated hotel in India. Hierarchical linear regression analyses demonstrated that one of two sub dimensions of WFC, namely, family related roles interfering with work related roles (FIW) was negatively associated with JS. Both direct and moderating relationships of three sub dimensions of OC were investigated and it was found that the affective component of OC has stronger direct effects on JS than normative OC; continuance commitment had no effect. The study also revealed that employees’ affective commitment moderates the effects of FIW on JS. The article concludes with implications for hospitality managers and future research directions.

It is a commonly held belief, especially among hospitality industry professionals, that work and family are two independent life domains. Kanter (1977) labels this belief the ‘myth of separate worlds.’ The separate world myth has since been modified through extensive research which has demonstrated that the two worlds are not independent and that the relationship between work and family is highly interdependent and dynamic (Huang, Hammer, Neal, & Perrin, 2004). Factors in the work world affect family life and vice versa (for example, Boyar, Maertz, Pearson, & Keough, 2003). Studies have also identified various antecedents and outcomes of such intersections between work and family roles (for example, Allen, Herst, Bruck, & Sutton, 2000; Frone, Russell, & Cooper, 1992a). Work–family conflict (WFC) results when engaging in one role (for example, as a parent) interferes with engaging in another role (for example, as an employee) (Greenhaus & Beutell, 1985). Research in WFC has typically examined the conflicts due to an interaction between the two roles. As such research has investigated various factors (for example marital status, child-care responsibilities, and work stress) in each sphere contributing to WFC (Boyar et al., 2003). However, Hammer, Bauer, and Grandey (2003) argue that although WFC depends to a great degree on interactions with supervisors and others in the immediate environment of an individual (whether at work or at home), existing research fails to consider this larger context and its effects on WFC. Further, researchers (Luk & Shaffer, 2005; Poelmans et al., 2003) point out that a shortcoming of existing research is that much of it has been done in the US and other western countries; very little work has been carried out in other regions of the world. The US hospitality industry is well-established globally. Many key hotel industry players are expanding rapidly in the Asian markets, especially India and China (Anonymous, 2005). Over 20 percent of the 16 million rooms world-wide are now controlled by a dozen leading chains (AH & LA, 2006). The AH&LA conference report also pointed to the need to consider the issue of human resources and its integration into the global expansion. As such it is important for US as well as international hospitality leaders to understand employment conditions in countries in which expansion is taking place if they are to obtain strategic advantages. While pragmatically important, understanding WFC in these countries will also help develop a more informed theory of WFC in a global context and provide researchers with a clearer understanding of the differences and similarities across nations. Accordingly, the need for increased consideration of two issues, namely an international focus and attention to the employees’ immediate work and organizational context, motivated this paper. Previous research has examined the relationships between WFC and various outcome variables in Jordan (Karatepe & Baddar, 2006), Northern Cyprus (Karatepe & Kilic, 2007), Turkey (Karatepe & Sokmen, 2006), and among Hispanic employees in the US (Namasivayam & Mount, 2004). However, little work has been done in WFC in developing countries as well as the Indian context (Karatepe & Kilic, 2007; Poelmans et al., 2003). While there is some research exploring the nature of work–family relations in high-technology firms, financial services, manufacturing, and telecommunication organizations in India (Aryee, Srinivas, & Tan, 2005; Poster & Prasad, 2005), there is no study to our knowledge exploring WFC in the context of the hospitality industry in India. There is therefore a need to understand WFC in the Indian context not only because of globalization imperatives but also because of the nature of the hospitality industry. Authors have characterized the hospitality industry as a very stressful work environment offering low wages yet demanding long work hours contributing to employees’ perceptions of WFC (Berta, 2002). Moreover, hospitality employees are expected to engage in a high degree of face-to-face interactions with consumers which leads to stress and potential WFC (Karatepe & Sokmen, 2006). Karatepe and Kilic (2007, p. 2) suggest that “hotels and food service outlets are among the most stressful work environments for both managers and employees.” Very important organizational outcomes of WFC such as job satisfaction, organizational commitment, intention to turnover, absenteeism, job performance, career satisfaction, and career success have been identified by researchers (Allen et al., 2000). It is therefore important to understand the relationships between WFC and organizational outcomes in the context of the Indian hospitality industry. As noted earlier, prior work has examined WFC in the hospitality context in several countries contributing to our understanding of the nature if WFC in diverse settings. In terms of the relationships among the variables, Karatepe and Sokmen (2006) examined the relationship of WFC to employees service recovery performance, job satisfaction and intentions to leave; Karatepe and Baddar (2006) examined if WFC influenced family satisfaction, life satisfaction, and turnover intentions; Karatepe and Kilic (2007) examined if WFC has both direct and indirect effects via job performance, job satisfaction, and affective organizational commitment on turnover intentions; Namasivayam and Mount (2004) tested the direct effects of WFC on job satisfaction and organizational commitment. The present study extends this body of work and examines the relationship between WFC and employees’ job satisfaction; specifically, it is suggested that employees’ commitment to their organization will moderate the effects of WFC on their job satisfaction. In sum, the relationship of WFC to job satisfaction (JS) and organizational commitment (OC) is explored in the Indian hospitality industry context in this paper. Data for the study were collected from a single hotel company in a southern Indian city. Fig. 1 provides the theoretical and conceptual model.

The rapidly globalizing hospitality industry faces challenges with implementation of appropriate and productive HR practices worldwide. As other researchers have noted, it is inappropriate to transfer research findings based in certain cultures and societies to others without adequate investigation. The hospitality industry in Asia is growing at a rapid pace with the international hospitality majors playing an important role in the expansion. It is important therefore for worldwide industry managers to understand if and what differences there are in the ‘typical’ Asian hospitality employee. This study contributes to this understanding by exploring the relationship of work and family role conflicts, organizational commitment, and job satisfaction. This study has highlighted the role of affective commitment in moderating the effects on job satisfaction of conflicts arising from employees’ family roles. Cultural factors such as religion and economic factors such as local labor market conditions were explored as potential influences on commitment to the organization. This study is an important first step in understanding how Asian employees perceive and attribute role conflicts and how such attribution affects job satisfaction.