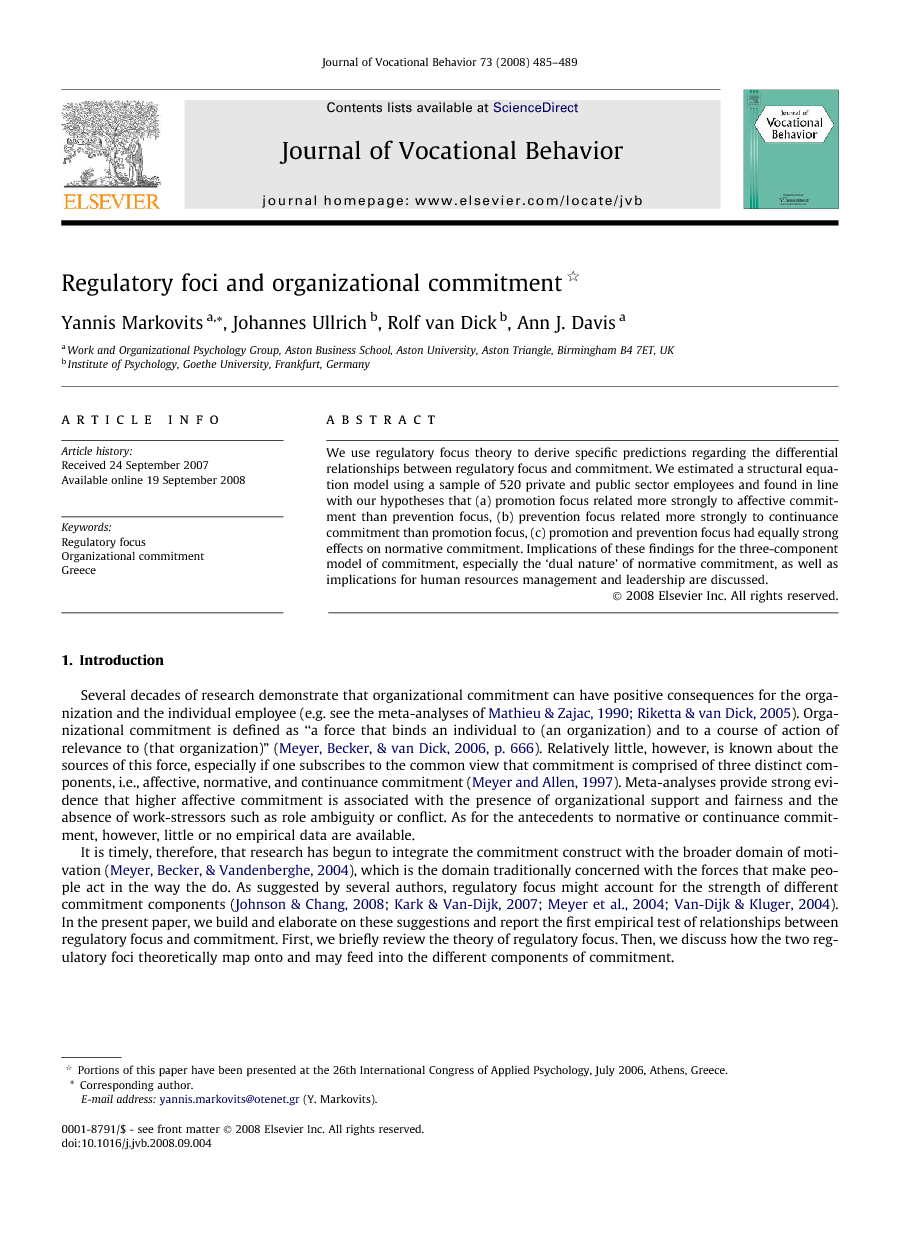 Several decades of research demonstrate that organizational commitment can have positive consequences for the organization and the individual employee (e.g. see the meta-analyses of Mathieu and Zajac, 1990 and Riketta and van Dick, 2005). Organizational commitment is defined as “a force that binds an individual to (an organization) and to a course of action of relevance to (that organization)” (Meyer, Becker, & van Dick, 2006, p. 666). Relatively little, however, is known about the sources of this force, especially if one subscribes to the common view that commitment is comprised of three distinct components, i.e., affective, normative, and continuance commitment (Meyer and Allen, 1997). Meta-analyses provide strong evidence that higher affective commitment is associated with the presence of organizational support and fairness and the absence of work-stressors such as role ambiguity or conflict. As for the antecedents to normative or continuance commitment, however, little or no empirical data are available. It is timely, therefore, that research has begun to integrate the commitment construct with the broader domain of motivation (Meyer, Becker, & Vandenberghe, 2004), which is the domain traditionally concerned with the forces that make people act in the way the do. As suggested by several authors, regulatory focus might account for the strength of different commitment components (Johnson and Chang, 2008, Kark and Van-Dijk, 2007, Meyer et al., 2004 and Van-Dijk and Kluger, 2004). In the present paper, we build and elaborate on these suggestions and report the first empirical test of relationships between regulatory focus and commitment. First, we briefly review the theory of regulatory focus. Then, we discuss how the two regulatory foci theoretically map onto and may feed into the different components of commitment.

Table 1 provides descriptive statistics, Cronbach α coefficients, indices of within-group homogeneity, and inter-correlations for the components of commitment and the two regulatory focus states. Because we sampled multiple employees from the same organizations, we first examined to what extent regulatory focus and commitment reflected shared perceptions among employees from the same organization.We used multiple criteria to assess within-group agreement (Klein & Kozlowski, 2000). As can be seen in Table 1, the View the MathML sourcer¯wg.j index (James, Demaree, & Wolf, 1984) and the View the MathML sourcer¯wg.j∗ index (Lindell, Brandt, & Whitney, 1999) with a uniform distribution were below the conventional cutoff value of .70 except for promotion focus. Likewise, the ICC(1) index suggested that only 5% of the variance in regulatory focus and commitment was explained by group membership, and ICC(2) revealed low reliability of the group means. Concentrating on regulatory focus, our initial question was if our measures would reflect only individual differences or shared situational influences resulting in organizational level promotion or prevention foci as well. In general, the values of the View the MathML sourcer¯wg.j indices were low to moderate, suggesting that there was some similarity within organizations regarding promotion and prevention focus. This could mean that common experiences (e.g. leadership processes) within organizations have shaped regulatory focus or that individuals with similar dispositions tend to work in the same organizations. As discussed above, a situation of no within-group agreement would have provided a clearer interpretation of our measures. The most plausible interpretation, then, is that our measures of promotion and prevention focus reflect a mixture of dispositions and situational influences, with the evidence for shared prevention focus being weaker than for promotion focus. To ascertain the differential relationships between regulatory foci and components of commitment, we needed to ensure that these relationships would not differ due to differential reliability of the independent variables. Indeed, preliminary analyses indicated that our measure of prevention focus was less reliable (Cronbach’s α = .60) than our measure of promotion focus (α = .75). Therefore, we decided to treat promotion and prevention focus as latent variables in a structural equation model so as to estimate their relationships at the construct level. Because we sampled multiple employees from the same organizations, our statistical analyses had to take this non-independence into account. We accomplished this by using the TYPE = COMPLEX method in the Mplus Software (Muthén & Muthén, 2007), which corrects the standard errors for the bias due to clustering. This method limits the number of parameters that can be estimated to the number of clusters in the sample (i.e., 36). Therefore, we could not specify full measurement models for the regulatory foci using all available items. The compromise that we chose was to use two item parcels and one single item as indicators for each latent regulatory focus. The complete structural equation model underlying our hypothesis tests is shown in Fig. 1. As was expected based on the poor reliability estimates for prevention focus, the fit of the model was suboptimal, but acceptable, χ2 (20) = 63.30, p < .001, CFI = .95, RMSEA = .07. Although future work would be advised to use a better measure of prevention focus, for current purposes we are content to correct for differential measurement error in the regulatory foci by estimating them as latent variables. All paths extending from the regulatory foci to the components of commitment were positive and significant (p < .05), except from the path from prevention focus to affective commitment. We tested our hypotheses using the Wald χ2 test on equality constraints on the structural parameters relating the regulatory foci to a given component of commitment. As expected, promotion focus had a significantly stronger (p < .05) effect on affective commitment (β = .32) than did prevention focus (β = .09), and prevention focus had a significantly stronger (p < .05) effect on continuance commitment (β = .30) than did promotion focus (β = .10). As for normative commitment, the hypothesis could not be rejected that the effects of both regulatory foci (β = .31 for promotion focus and β = .17 for prevention focus) are equally strong (p = .19).