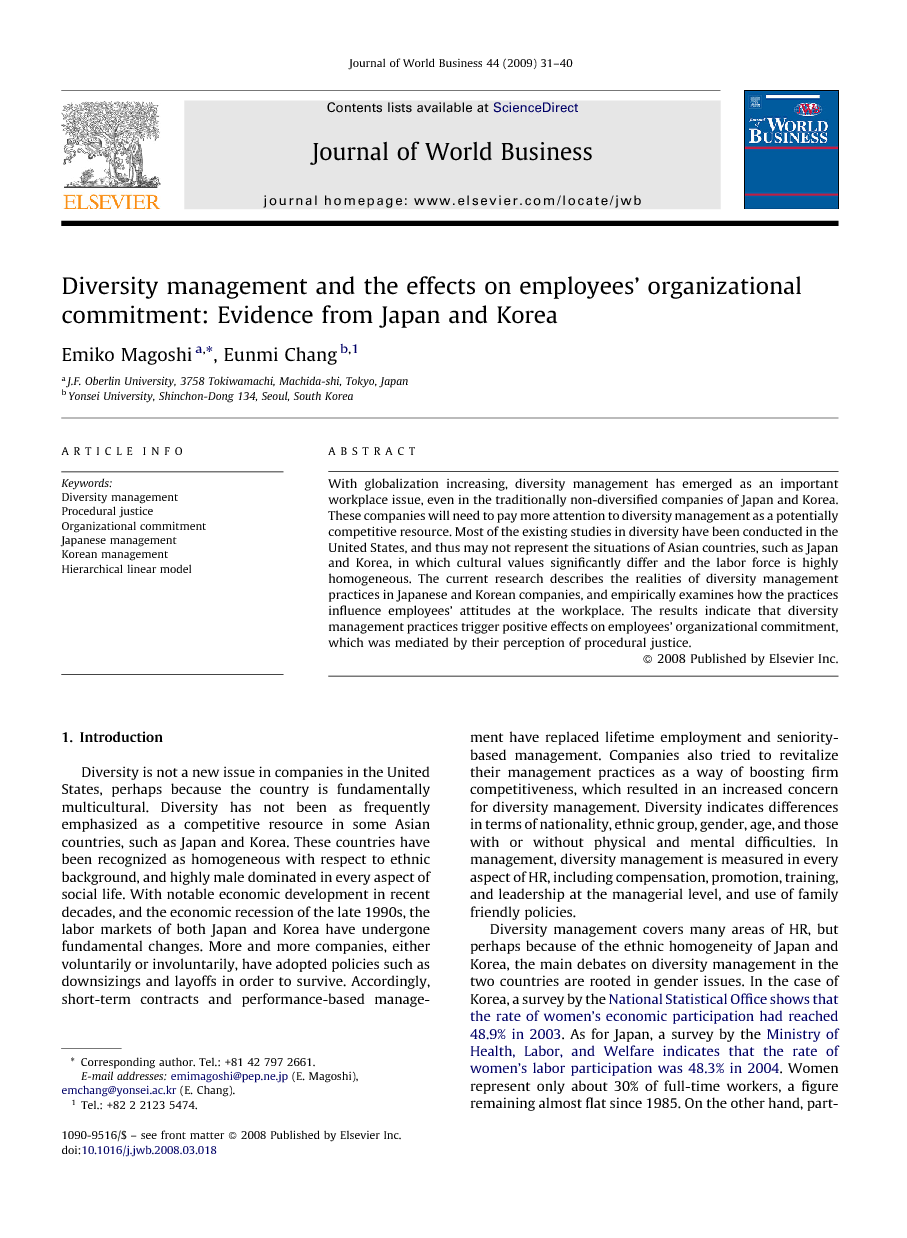 With globalization increasing, diversity management has emerged as an important workplace issue, even in the traditionally non-diversified companies of Japan and Korea. These companies will need to pay more attention to diversity management as a potentially competitive resource. Most of the existing studies in diversity have been conducted in the United States, and thus may not represent the situations of Asian countries, such as Japan and Korea, in which cultural values significantly differ and the labor force is highly homogeneous. The current research describes the realities of diversity management practices in Japanese and Korean companies, and empirically examines how the practices influence employees’ attitudes at the workplace. The results indicate that diversity management practices trigger positive effects on employees’ organizational commitment, which was mediated by their perception of procedural justice.

Diversity is not a new issue in companies in the United States, perhaps because the country is fundamentally multicultural. Diversity has not been as frequently emphasized as a competitive resource in some Asian countries, such as Japan and Korea. These countries have been recognized as homogeneous with respect to ethnic background, and highly male dominated in every aspect of social life. With notable economic development in recent decades, and the economic recession of the late 1990s, the labor markets of both Japan and Korea have undergone fundamental changes. More and more companies, either voluntarily or involuntarily, have adopted policies such as downsizings and layoffs in order to survive. Accordingly, short-term contracts and performance-based management have replaced lifetime employment and seniority-based management. Companies also tried to revitalize their management practices as a way of boosting firm competitiveness, which resulted in an increased concern for diversity management. Diversity indicates differences in terms of nationality, ethnic group, gender, age, and those with or without physical and mental difficulties. In management, diversity management is measured in every aspect of HR, including compensation, promotion, training, and leadership at the managerial level, and use of family friendly policies. Diversity management covers many areas of HR, but perhaps because of the ethnic homogeneity of Japan and Korea, the main debates on diversity management in the two countries are rooted in gender issues. In the case of Korea, a survey by the National Statistical Office shows that the rate of women's economic participation had reached 48.9% in 2003. As for Japan, a survey by the Ministry of Health, Labor, and Welfare indicates that the rate of women's labor participation was 48.3% in 2004. Women represent only about 30% of full-time workers, a figure remaining almost flat since 1985. On the other hand, part-timers and other non-regular workers make up a larger percentage of both men and women. This trend is particularly salient for female workers; the rate of female part-timers has increased from 31.9% in 1985 to 51.6% in 2004. Workers – especially female workers – are having difficulty finding full-time positions. Moreover, women in both countries have a long way to go when it comes to managerial positions. Women account for only 5% of managers in Korea and 8% in Japan (Ministry of Health, Labor and Welfare, 2003; Sung, 2005). With increased globalization diversity management emerging as an important issue for the traditionally non-diversified companies of Japan and Korea, these companies will need to pay more attention to diversity management as a potential competitive resource. Most of the existing studies in diversity have been done in a U.S. setting. These may not represent the situations of Japan and Korea, in which the cultural values significantly differ (Gelfand, Nishii, & Raver, 2006; Hofstede, 1991). Moreover, a review of the existing studies on diversity shows that they have mainly focused on diversity among work group members (Chatman & O’Reilly, 2004; Takfel & Turner, 1979; Webber & Donahue, 2001), while ignoring the impact of strategic HR management on employee attitudes. That is, how diversity in teams is related to the teams’ cohesiveness and performance has been widely examined, but how the company's diversity strategy influences employees’ attitudes at the workplace are still left unanswered. The current research aims to describe the realities of diversity management practices in the case of Japanese and Korean companies, and further examines how the practices influence employees’ attitudes at the workplace. The authors rely on the emerging HR paradigm of commitment. Contrasted to the control management paradigm of strictly controlling labor costs for higher efficiency, the commitment approach views the relationship between the company and employees as exchanges of commitment (March & Simon, 1958). For instance, when firms promise their employees employment security, the individuals, in return, are likely to become more committed to the company. When an organization expresses its commitment to its workforce, the employees will, in return, reciprocate with their commitment to the organization (Kossek & Block, 2000). Studies have supported the positive effects of these commitment practices not only in U.S. (e.g., Arthur, 1994 and Huselid, 1995), but also in an Asian setting (e.g., Bae & Lawler, 2000; Chang, 2006). Diversity management is held to be a reflection of the commitment management philosophy. Companies pursuing commitment HR practices also tend to utilize diversity management, including family friendly policies (e.g., Osterman, 1995). These assertions imply that the effects of diversity management can be validly examined within the paradigm of the commitment management philosophy. The previous studies further suggest that procedural justice mediates the effects of management practices on employees’ commitment to organizations (Folger & Konovsky, 1989; McFarlin & Sweeney, 1992), a finding which is also valid in Asian settings (Chang, 2005). Relying upon these research frames, the current research examines the mediation process of procedural justice in the effects of diversity management practices on employees’ organizational commitment. Methodologically, the current research utilized a multilevel, multi-method approach. Multi-methods were used by applying in-depth interviews as a qualitative approach and questionnaire surveys as a quantitative approach. Data were collected at multilevels: company and individual levels. Diversity management practices were measured at the company level, while employees’ attitudes were directly measured at an individual level. This multilevel, multi-method approach seems to be a very effective method of examining the research agenda.