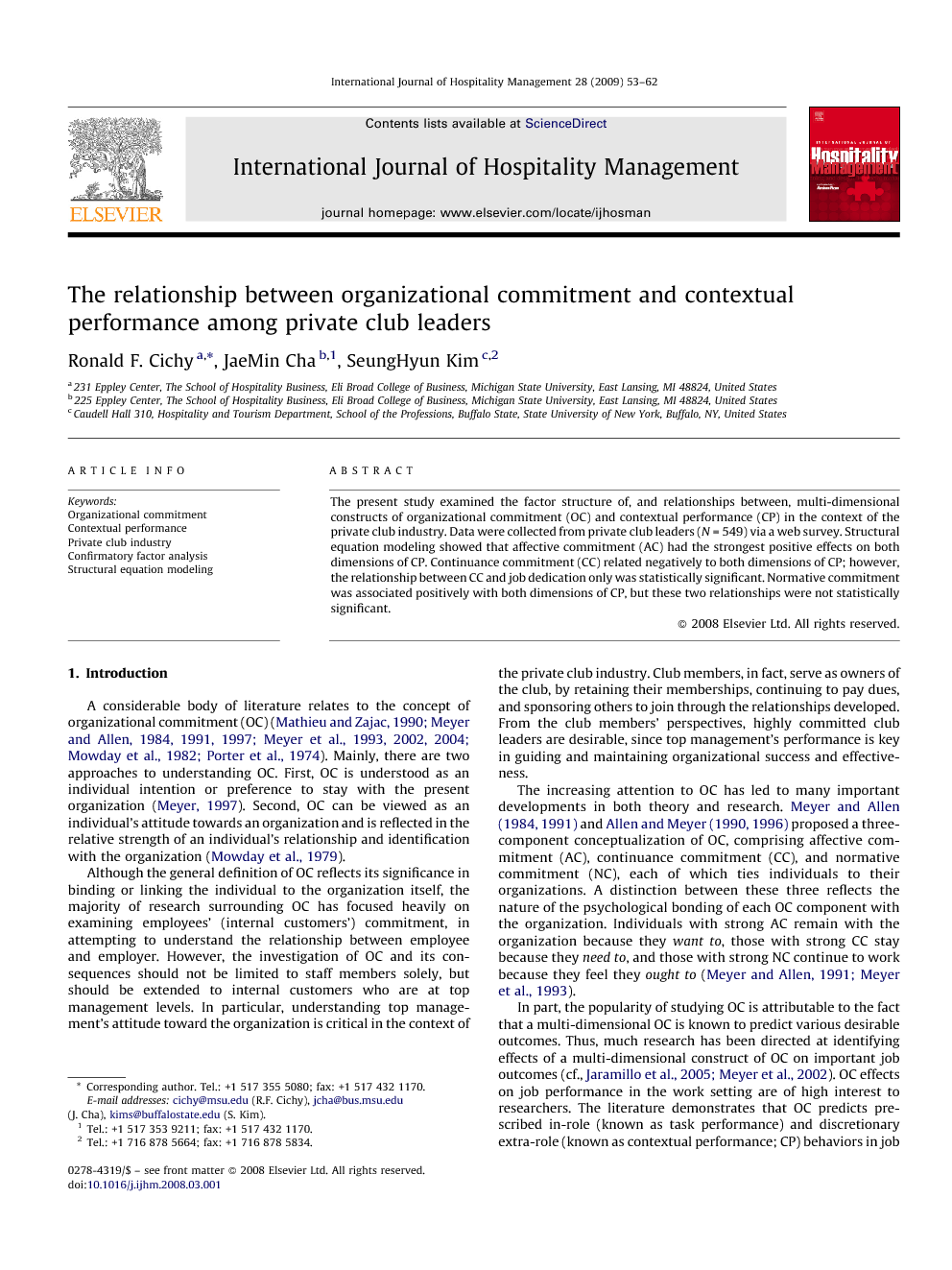 A considerable body of literature relates to the concept of organizational commitment (OC) (Mathieu and Zajac, 1990, Meyer and Allen, 1984, Meyer and Allen, 1991, Meyer and Allen, 1997, Meyer et al., 1993, Meyer et al., 2002, Meyer et al., 2004, Mowday et al., 1982 and Porter et al., 1974). Mainly, there are two approaches to understanding OC. First, OC is understood as an individual intention or preference to stay with the present organization (Meyer, 1997). Second, OC can be viewed as an individual's attitude towards an organization and is reflected in the relative strength of an individual's relationship and identification with the organization (Mowday et al., 1979). Although the general definition of OC reflects its significance in binding or linking the individual to the organization itself, the majority of research surrounding OC has focused heavily on examining employees’ (internal customers’) commitment, in attempting to understand the relationship between employee and employer. However, the investigation of OC and its consequences should not be limited to staff members solely, but should be extended to internal customers who are at top management levels. In particular, understanding top management's attitude toward the organization is critical in the context of the private club industry. Club members, in fact, serve as owners of the club, by retaining their memberships, continuing to pay dues, and sponsoring others to join through the relationships developed. From the club members’ perspectives, highly committed club leaders are desirable, since top management's performance is key in guiding and maintaining organizational success and effectiveness. The increasing attention to OC has led to many important developments in both theory and research. Meyer and Allen, 1984 and Meyer and Allen, 1991 and Allen and Meyer, 1990 and Allen and Meyer, 1996 proposed a three-component conceptualization of OC, comprising affective commitment (AC), continuance commitment (CC), and normative commitment (NC), each of which ties individuals to their organizations. A distinction between these three reflects the nature of the psychological bonding of each OC component with the organization. Individuals with strong AC remain with the organization because they want to, those with strong CC stay because they need to, and those with strong NC continue to work because they feel they ought to ( Meyer and Allen, 1991 and Meyer et al., 1993). In part, the popularity of studying OC is attributable to the fact that a multi-dimensional OC is known to predict various desirable outcomes. Thus, much research has been directed at identifying effects of a multi-dimensional construct of OC on important job outcomes (cf., Jaramillo et al., 2005 and Meyer et al., 2002). OC effects on job performance in the work setting are of high interest to researchers. The literature demonstrates that OC predicts prescribed in-role (known as task performance) and discretionary extra-role (known as contextual performance; CP) behaviors in job performance (Brewer, 1996, Chen and Francesco, 2003, Chen et al., 2002, Cohen, 2006, Gautam et al., 2005, Paulin et al., 2006, Preston and Brown, 2004, Shaw et al., 2003, Sinclair et al., 2005 and Williams and Anderson, 1991). This present study examined OC effects on CP, including job dedication and interpersonal facilitation, since leaders interacting with many levels of individuals within the organization are likely to be successful when engaged in extra-role behaviors beyond formal role requirements. Despite growing interest in the concepts of OC and CP, relationships between these two constructs are still somewhat unclear because of the multi-dimensionality of the constructs. Meyer and Allen (1997) posited that researchers can achieve a better understanding of an individual relationship with an organization when all three components of OC are considered together. Not many empirical studies have investigated all three components of OC; therefore, it is imperative for researchers to investigate those components to understand their effects on CP.