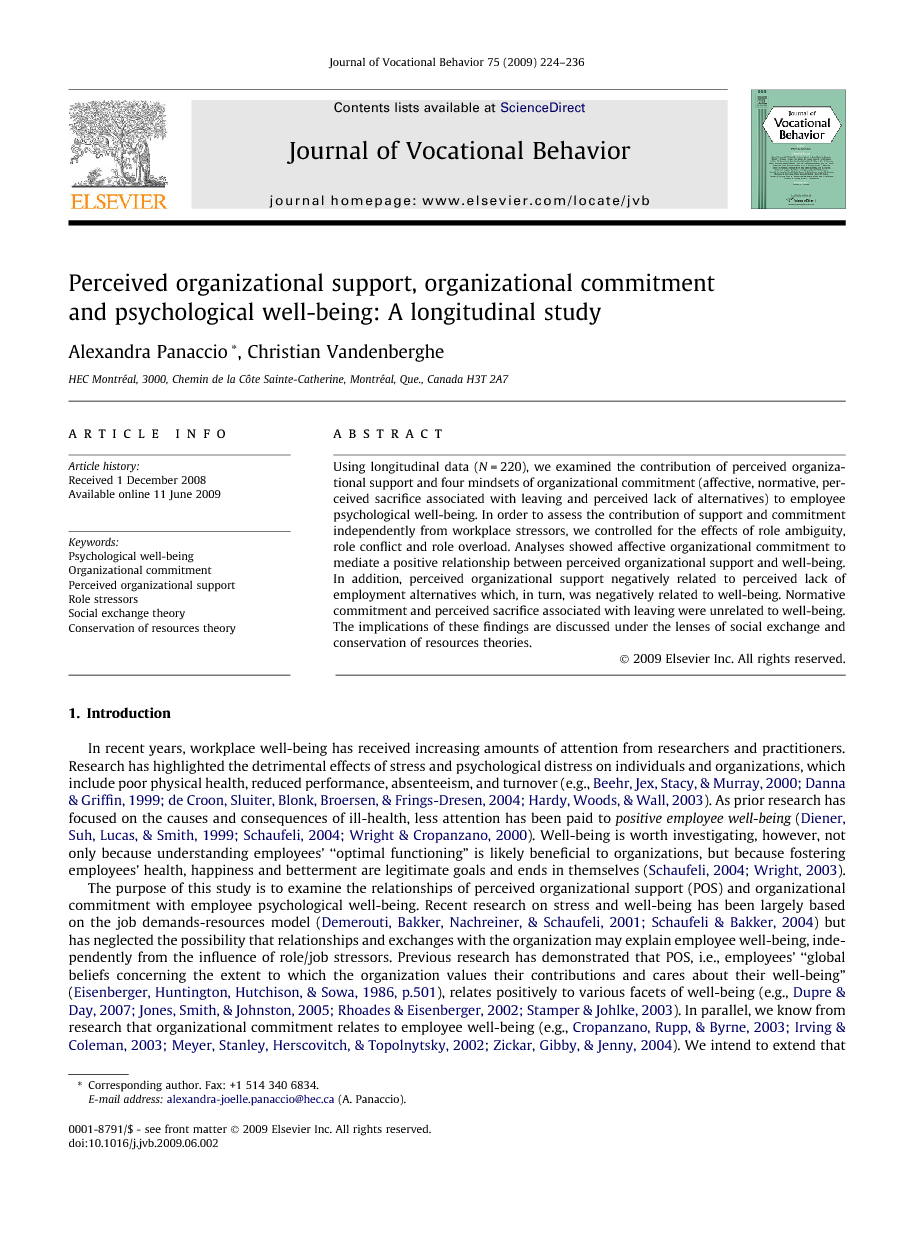 In recent years, workplace well-being has received increasing amounts of attention from researchers and practitioners. Research has highlighted the detrimental effects of stress and psychological distress on individuals and organizations, which include poor physical health, reduced performance, absenteeism, and turnover (e.g., Beehr et al., 2000, Danna and Griffin, 1999, de Croon et al., 2004 and Hardy et al., 2003). As prior research has focused on the causes and consequences of ill-health, less attention has been paid to positive employee well-being ( Diener et al., 1999, Schaufeli, 2004 and Wright and Cropanzano, 2000). Well-being is worth investigating, however, not only because understanding employees’ “optimal functioning” is likely beneficial to organizations, but because fostering employees’ health, happiness and betterment are legitimate goals and ends in themselves ( Schaufeli, 2004 and Wright, 2003). The purpose of this study is to examine the relationships of perceived organizational support (POS) and organizational commitment with employee psychological well-being. Recent research on stress and well-being has been largely based on the job demands-resources model (Demerouti et al., 2001 and Schaufeli and Bakker, 2004) but has neglected the possibility that relationships and exchanges with the organization may explain employee well-being, independently from the influence of role/job stressors. Previous research has demonstrated that POS, i.e., employees’ “global beliefs concerning the extent to which the organization values their contributions and cares about their well-being” (Eisenberger, Huntington, Hutchison, & Sowa, 1986, p.501), relates positively to various facets of well-being (e.g., Dupre and Day, 2007, Jones et al., 2005, Rhoades et al., 2002 and Stamper and Johlke, 2003). In parallel, we know from research that organizational commitment relates to employee well-being (e.g., Cropanzano et al., 2003, Irving and Coleman, 2003, Meyer et al., 2002 and Zickar et al., 2004). We intend to extend that line of research by investigating the relationship of POS to well-being as mediated by organizational commitment, while controlling for the influence of three major workplace stressors, role ambiguity, role conflict and role overload (e.g., Beehr et al., 2000 and King and Sethi, 1997). The relationships of POS and organizational commitment to work behavior have been largely conceptualized within a social exchange perspective (Blau, 1964). That is, POS is thought to represent employees’ belief that the organization is willing to reward them for the effort made on its behalf (Rhoades et al., 2002), which in turn would induce a felt obligation to reciprocate on their part (Gouldner, 1960). This leads to employees experiencing increased organizational commitment and engaging in behaviors that benefit the organization (Lavelle, Rupp, & Brockner, 2007). We propose that the social exchange approach to POS and commitment can be supplemented by principles from Conservation of Resources (COR) theory (Hobfoll, 1989 and Hobfoll and Freedy, 1993) in order to better understand why they also contribute to employee psychological well-being. We argue that, in parallel to their social exchange benefits for the organization, POS and commitment shape the resources necessary for employees to carry out their responsibilities as members of the organization, and via this process explain employees’ psychological well-being. In the next few sections, we review the literature on POS, organizational commitment and psychological well-being. In so doing, we discuss how the principles of COR theory can be applied to understand POS’s and commitment’s roles in shaping employees’ resource availability and capacities, hence influencing employee well-being. We also present and discuss our hypotheses within a research model (cf. Fig. 1) that accounts for the influence of three major workplace stressors, role ambiguity, role conflict and role overload.

We first examined the structure of our data through confirmatory factor analysis using LISREL 8.54 (Jöreskog, Sörbom, Du Toit, & Du Toit, 2001), with a covariance matrix as input and using the maximum likelihood method of estimation. In order to avoid testing a too complex model, we randomly combined items to create three indicators per construct (Drasgow and Kanfer, 1985 and Landis et al., 2000) for constructs measured by more than three items, with the exception of employee well-being, which was assessed via mean scores on four facets of well-being: positive affect, absence of negative affect, job satisfaction and life satisfaction. We tested and compared, via χ2 difference tests, a series of nested models (Bentler & Bonett, 1980). Results are shown in Table 1. The hypothesized nine-factor model comprising POS, the four commitment mindsets, the three role stressors and psychological well-being yielded a good fit to the data: χ2 (314) = 506.60, p < .01, NNFI = .96, CFI = .97, RMSEA = .05. This model proved superior to simpler representations of the data, including eight-factor models obtained by combining HS and LA (Δχ2 [8] = 198.33, p < .01) or AC and NC (Δχ2 [8] = 298.60, p < .01), a seven-factor model combining the three role stressors (Δχ2 [15] = 659.51, p < .01), and a six-factor model combining all four commitment mindsets (Δχ2 [21] = 674.68, p < .01). These results provide evidence of the distinctiveness of the study’s variables.Descriptive statistics, correlations among variables, and alpha coefficients are presented in Table 2. As can be seen, all variables displayed good internal consistency (αs > .76). Correlations involving control variables were consistent with expectations, with the exception of a significant moderate negative correlation between survey language and HS. A multivariate analysis of variance suggested the presence of significant differences between the French and English-language groups when all study variables were entered as a set (Wilks’ lambda = .866, F(9) = 3.62, p < .001), but looking at the variables individually showed that only HS means were significantly different between language groups (F(1) = 19.56, p < .001). As respondents were from diverse cultural groups, this correlation must be attributed to differences in the way English and French scales capture the meaning of HS rather than as an indication of cultural differences.We examined the fit of our hypothesized model as well as that of alternative models using structural equations modeling. As for the CFA models, and using the same procedure, we aggregated items to create three indicators per construct, with the exception of employee well-being for which we kept the same four indicators. Results are shown in Table 3. The theoretical model yielded a good fit to the data, χ2 (333) = 594.59, p < .01, NNFI = .95, CFI = .96, RMSEA = .06. To examine whether POS related directly to employee well-being, we freed the corresponding path in the theoretical model. As can be seen from Table 3, adding a path from POS to employee well-being did not improve model fit (Δχ2 [1] = 0.00, ns). The hypothesized model, more parsimonious, is thus retained and preferred over this alternate model (James, Mulaik, & Brett, 2006), suggesting that commitment mindsets mediate the relationship of POS to employee well-being.To assess whether POS related to workplace stressors, we tested alternative models in which we set the covariances between POS and the three role stressors to zero. Significant decreases in model fit occurred when we set the covariance between support and ambiguity to zero (Δχ2 [1] = 25.99, p < .01; cf. Table 3), and the covariance between support and conflict to zero (Δχ2 [1] = 17.97, p < .01; cf. Table 3). However, constraining the covariance between POS and role overload to zero resulted in a non-significant change in model fit (Δχ2 [1] = 0.13, ns; cf. Table 3). The latter model, more parsimonious than the hypothesized model, is thus retained as the final model (cf. James et al., 2006).