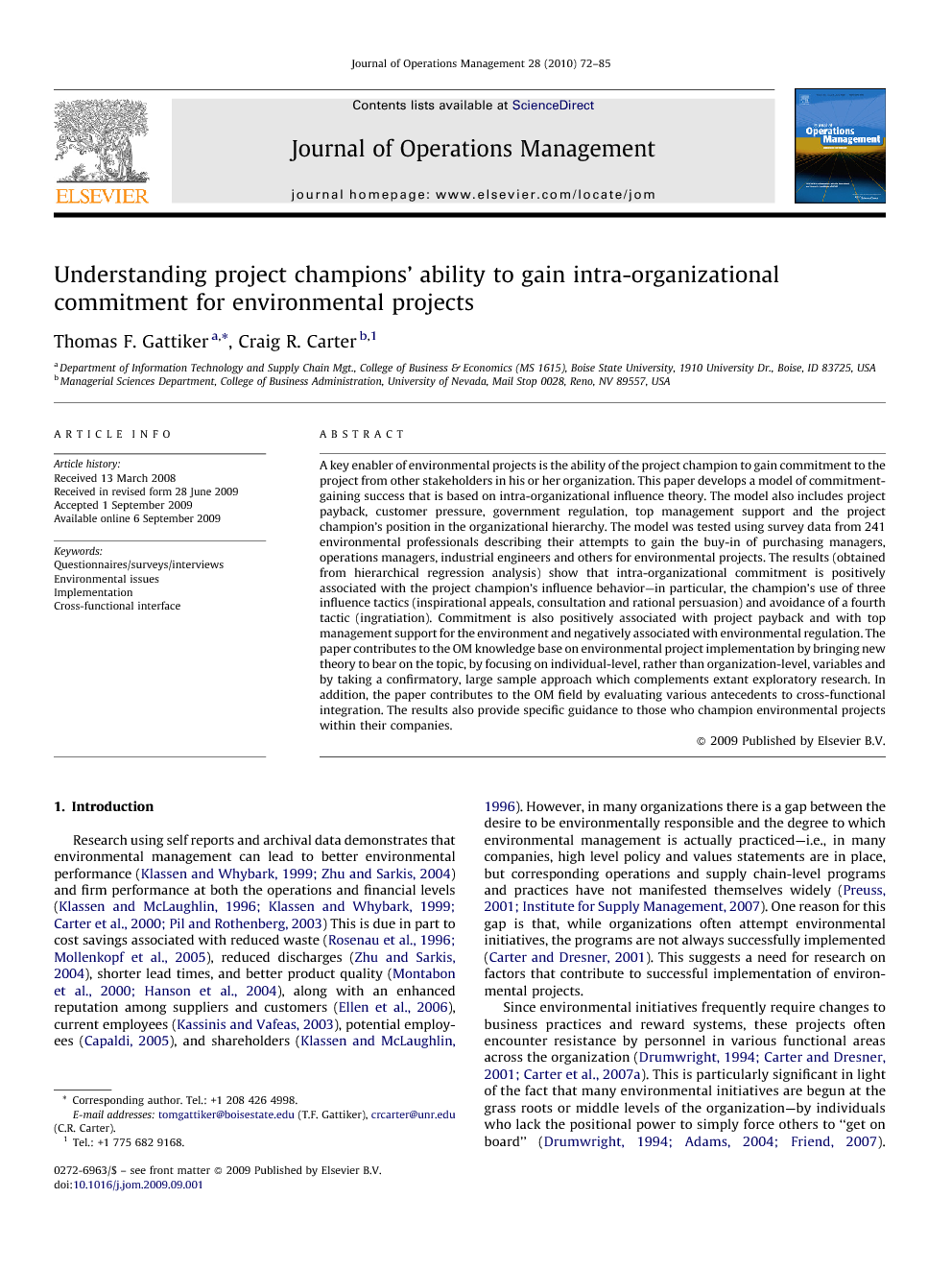 A key enabler of environmental projects is the ability of the project champion to gain commitment to the project from other stakeholders in his or her organization. This paper develops a model of commitment-gaining success that is based on intra-organizational influence theory. The model also includes project payback, customer pressure, government regulation, top management support and the project champion's position in the organizational hierarchy. The model was tested using survey data from 241 environmental professionals describing their attempts to gain the buy-in of purchasing managers, operations managers, industrial engineers and others for environmental projects. The results (obtained from hierarchical regression analysis) show that intra-organizational commitment is positively associated with the project champion's influence behavior—in particular, the champion's use of three influence tactics (inspirational appeals, consultation and rational persuasion) and avoidance of a fourth tactic (ingratiation). Commitment is also positively associated with project payback and with top management support for the environment and negatively associated with environmental regulation. The paper contributes to the OM knowledge base on environmental project implementation by bringing new theory to bear on the topic, by focusing on individual-level, rather than organization-level, variables and by taking a confirmatory, large sample approach which complements extant exploratory research. In addition, the paper contributes to the OM field by evaluating various antecedents to cross-functional integration. The results also provide specific guidance to those who champion environmental projects within their companies.

Research using self reports and archival data demonstrates that environmental management can lead to better environmental performance (Klassen and Whybark, 1999 and Zhu and Sarkis, 2004) and firm performance at both the operations and financial levels (Klassen and McLaughlin, 1996, Klassen and Whybark, 1999, Carter et al., 2000 and Pil and Rothenberg, 2003) This is due in part to cost savings associated with reduced waste (Rosenau et al., 1996 and Mollenkopf et al., 2005), reduced discharges (Zhu and Sarkis, 2004), shorter lead times, and better product quality (Montabon et al., 2000 and Hanson et al., 2004), along with an enhanced reputation among suppliers and customers (Ellen et al., 2006), current employees (Kassinis and Vafeas, 2003), potential employees (Capaldi, 2005), and shareholders (Klassen and McLaughlin, 1996). However, in many organizations there is a gap between the desire to be environmentally responsible and the degree to which environmental management is actually practiced—i.e., in many companies, high level policy and values statements are in place, but corresponding operations and supply chain-level programs and practices have not manifested themselves widely (Preuss, 2001 and Institute for Supply Management, 2007). One reason for this gap is that, while organizations often attempt environmental initiatives, the programs are not always successfully implemented (Carter and Dresner, 2001). This suggests a need for research on factors that contribute to successful implementation of environmental projects. Since environmental initiatives frequently require changes to business practices and reward systems, these projects often encounter resistance by personnel in various functional areas across the organization (Drumwright, 1994, Carter and Dresner, 2001 and Carter et al., 2007a). This is particularly significant in light of the fact that many environmental initiatives are begun at the grass roots or middle levels of the organization—by individuals who lack the positional power to simply force others to “get on board” (Drumwright, 1994, Adams, 2004 and Friend, 2007). Numerous case studies have found that a key to overcoming intra-organizational resistance and other barriers is the ability of a project champion to gain the buy-in or commitment of others in the company, particularly across functional/departmental boundaries ( Drumwright, 1994, Handfield et al., 1997, Crane, 2000, Carter and Jennings, 2004, Carter et al., 2007a, Carter et al., 2007b and Willard, 2008). For example, a conclusion of one study (Handfield et al., 1997, p. 311) is “The common thread within all of the companies studied is that environmental management cannot succeed when the responsibility is delegated to specialists.” Rather a variety of functional areas must participate (Handfield et al., 1997). In fact, how one gains the commitment of others to environmental projects, especially when those others do not consider the environment as “part of my job,” is one of five future research priorities identified by Handfield et al. (1997) study. In spite of this, the operations management (OM) and supply chain fields have produced little research, especially confirmatory research, on the role of the individual environmental management champion in bringing about change. The present paper helps to fill this gap by asking the research question, what determines the ability of project advocates to gain the cross-functional commitment of other stakeholders in their organization for environmental management projects? In this context, examples of environmental management projects include changing the materials used in a product (e.g., from virgin to recycled content inputs) or used in running the business (e.g., replacing solvents that contain high volatile organic compounds); using less of a particular input (e.g., reducing energy consumption through purchasing Energy Star compliant computers); and implementing new facilities management practices ( Handfield et al., 1997, Melnyk et al., 2003, Montabon et al., 2007 and Tate et al., 2007). Only a few existing studies address this research question. And, those that do employ an exploratory approach (Drumwright, 1994 and Carter and Dresner, 2001). Our research extends and complements these works by using a large sample, deductive approach and by bringing existing, well-validated theory to bear on the problem. In particular, we draw on intra-organizational influence theory (Kipnis et al., 1980 and Yukl and Falbe, 1990), which is described in the next section. Within OM, the topic of gaining intra-organizational commitment, especially in a cross-functional context, has implications well beyond the domain of environmental projects. Management commitment is a recurring factor in OM literature dealing with a wide variety of project and process implementation efforts—for example, Total Quality Management implementation (Flynn et al., 1994 and Samson and Terziovski, 1999), JIT purchasing initiatives (Kaynak and Hartley, 2006), new product development success (Swink, 1999 and Swink et al., 2006), MRP/ERP implementation (Petroni, 2002 and Stratman and Roth, 2002) and capital project execution (Scott-Young and Samson, 2008). Lack of management commitment is a significant barrier to healthcare patient safety initiatives (McFadden et al., 2006) and to information technology implementation success in manufacturing and services (Sohal et al., 2001). Similarly, lateral or cross-functional cooperation is associated with improvements in quality (Flynn et al., 1995a and Flynn et al., 1995b), flexibility (Alder et al., 1999) and project management success (Pinto et al., 1993). Inter-functional integration leads to numerous positive outcomes, including manufacturing performance (Cua et al., 2001 and Sawhney and Piper, 2002), financial performance (O’Leary-Kelly and Flores, 2002) and employee morale (Hausman et al., 2002). However, in spite of their importance, the OM literature lacks investigations into the factors that lead to management commitment and inter-functional integration. By examining antecedents of cross-functional buy-in, this study plays an important part in filling this gap. The next section reviews the literature and explains the research model. As we then describe, the model is tested using survey data collected from environmental professionals who have attempted to gain the commitment of another stakeholder within their organization for an environmental project. Finally, we discuss the study's results and contributions

The adoption of new business practices often begins at the bottom or middle of the organizational hierarchy (Harrington, 1991, Weick and Wesley, 1996 and Gattiker and Gerard, 2005). In these cases wholesale “organization-level” adoption is really the sum of many local level projects or “small wins” (Cole, 2001). Thus our focus on the individual project and individual project advocate, as opposed to a company level of analysis, is a natural complement to existing research. In addition to contributing to the academic community's understanding of environmental project implementation and of intra-organizational influence, our rather granular focus allows us to give specific, actionable advice to environmental management advocates within companies.