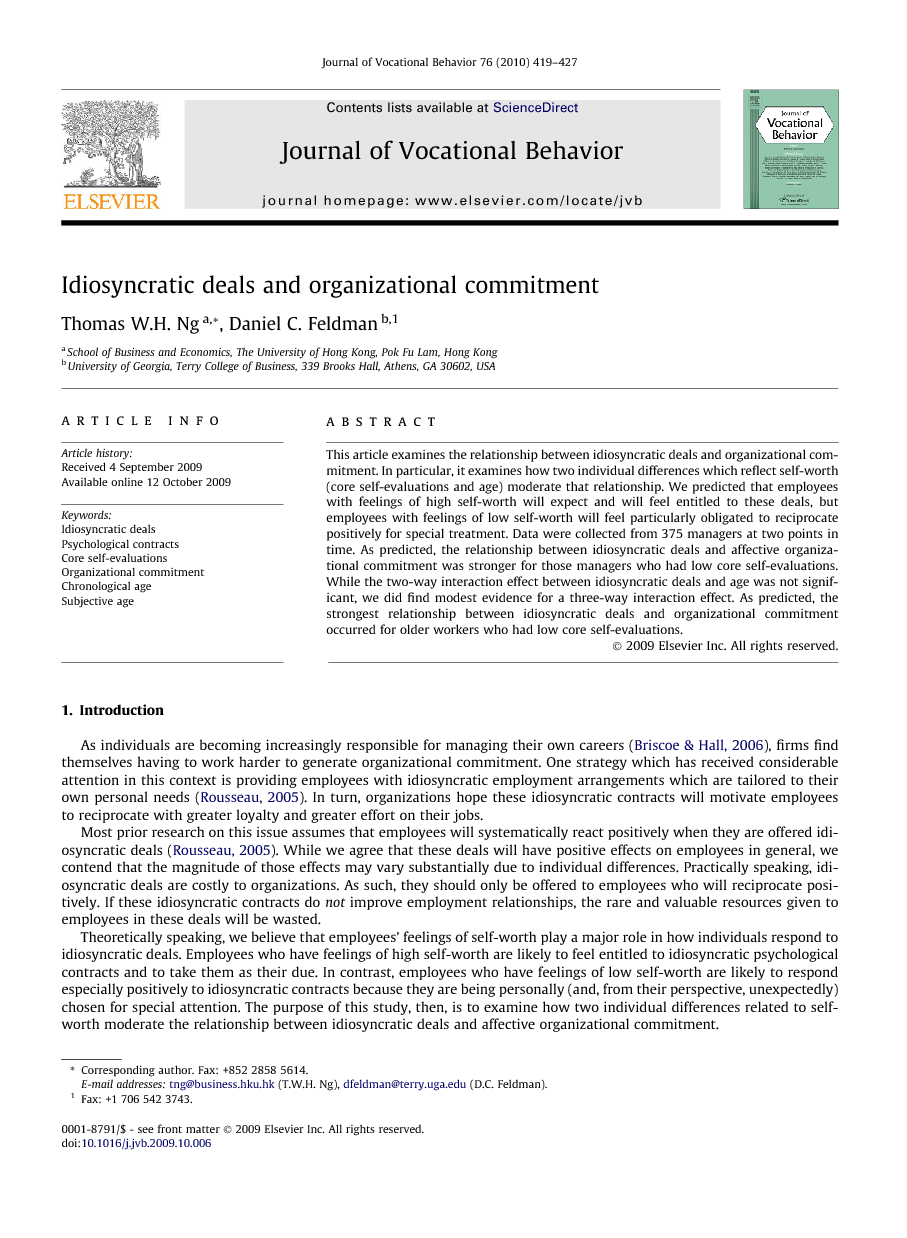 As individuals are becoming increasingly responsible for managing their own careers (Briscoe & Hall, 2006), firms find themselves having to work harder to generate organizational commitment. One strategy which has received considerable attention in this context is providing employees with idiosyncratic employment arrangements which are tailored to their own personal needs (Rousseau, 2005). In turn, organizations hope these idiosyncratic contracts will motivate employees to reciprocate with greater loyalty and greater effort on their jobs. Most prior research on this issue assumes that employees will systematically react positively when they are offered idiosyncratic deals (Rousseau, 2005). While we agree that these deals will have positive effects on employees in general, we contend that the magnitude of those effects may vary substantially due to individual differences. Practically speaking, idiosyncratic deals are costly to organizations. As such, they should only be offered to employees who will reciprocate positively. If these idiosyncratic contracts do not improve employment relationships, the rare and valuable resources given to employees in these deals will be wasted. Theoretically speaking, we believe that employees’ feelings of self-worth play a major role in how individuals respond to idiosyncratic deals. Employees who have feelings of high self-worth are likely to feel entitled to idiosyncratic psychological contracts and to take them as their due. In contrast, employees who have feelings of low self-worth are likely to respond especially positively to idiosyncratic contracts because they are being personally (and, from their perspective, unexpectedly) chosen for special attention. The purpose of this study, then, is to examine how two individual differences related to self-worth moderate the relationship between idiosyncratic deals and affective organizational commitment. The first individual difference we consider here is core self-evaluations, which represent the fundamental premises people have about themselves and how well they function in the world (Judge, Locke, & Durham, 1997). They reflect employees’ self-esteem, generalized self-efficacy, emotional stability, and locus of control. As a personality construct closely tied to the general notion of self-worth, core self-evaluations can play a major role in affecting how employees respond to idiosyncratic deals. The second individual difference we consider here is age. Historically, older workers face some barriers to entry and adverse treatment on the job (Posthuma and Campion, 2009 and Weiss and Maurer, 2004) which affect not only how older workers are viewed by colleagues, but also how older workers view themselves. Consequently, it is not surprising that researchers have found that older workers experience greater feelings of low self-worth than their younger counterparts do (Robins, Trzesniewski, Tracy, Gosling, & Potter, 2002). Thus, age can affect the level of self-worth employees bring to their employment relationships and, in so doing, influence how older workers view their employment contracts, too.

Retaining workers is a major challenge for organizations today due to the greater control employees have taken for managing their own careers (Arthur & Rousseau, 1996). Thus, employees may not be willing to join or stay with an organization unless employers offer them something special and unique. These arrangements not only make employees feel valued, but also weaken their beliefs they can get comparable deals elsewhere. Contract idiosyncrasy, then, is an important feature of psychological contracts in its own right. We hope that future research will continue to focus increased attention to the non-standard elements of those contracts that especially bind employees to their firms.