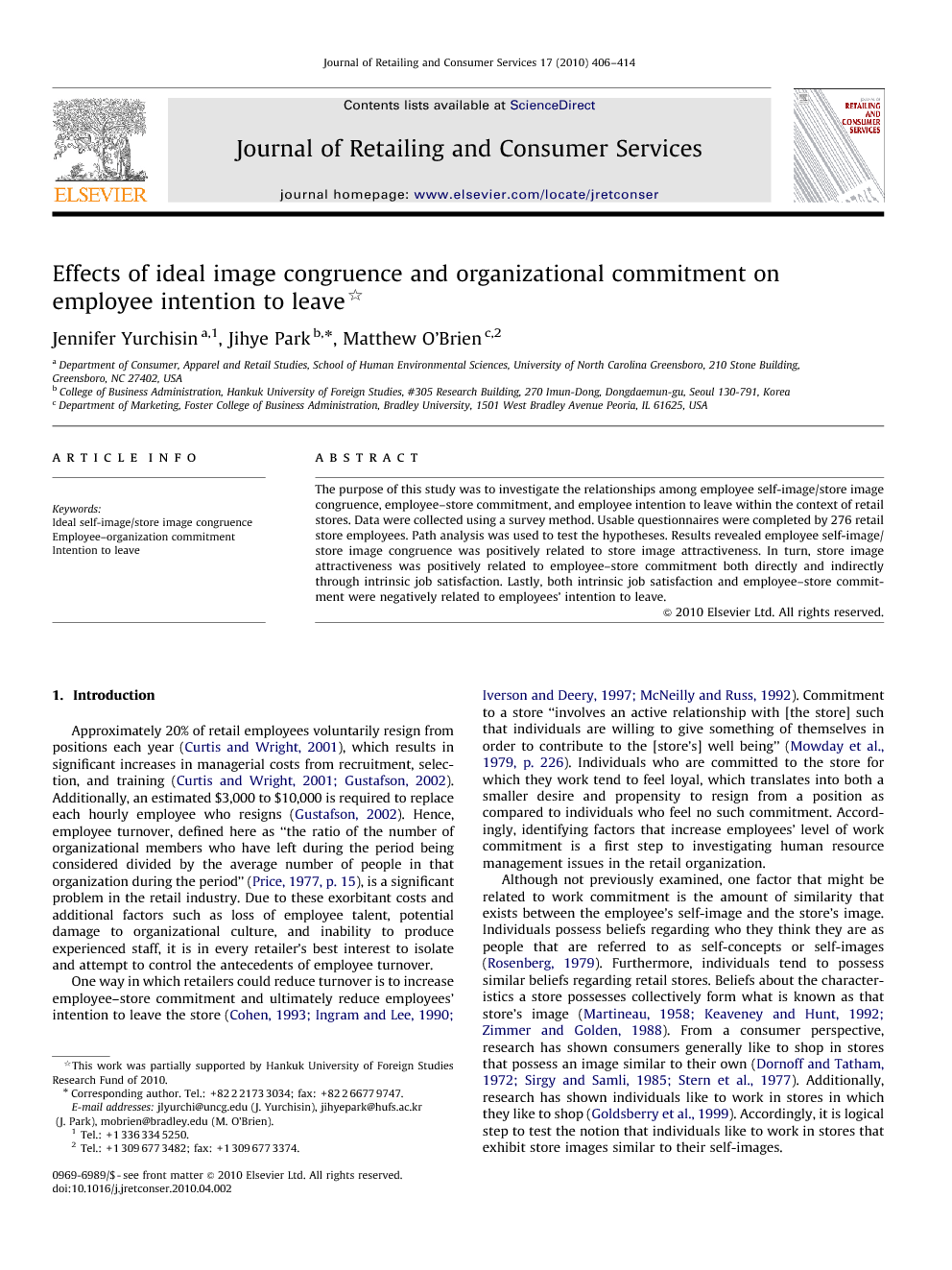 The purpose of this study was to investigate the relationships among employee self-image/store image congruence, employee–store commitment, and employee intention to leave within the context of retail stores. Data were collected using a survey method. Usable questionnaires were completed by 276 retail store employees. Path analysis was used to test the hypotheses. Results revealed employee self-image/store image congruence was positively related to store image attractiveness. In turn, store image attractiveness was positively related to employee–store commitment both directly and indirectly through intrinsic job satisfaction. Lastly, both intrinsic job satisfaction and employee–store commitment were negatively related to employees’ intention to leave.

Approximately 20% of retail employees voluntarily resign from positions each year (Curtis and Wright, 2001), which results in significant increases in managerial costs from recruitment, selection, and training (Curtis and Wright, 2001 and Gustafson, 2002). Additionally, an estimated $3,000 to $10,000 is required to replace each hourly employee who resigns (Gustafson, 2002). Hence, employee turnover, defined here as “the ratio of the number of organizational members who have left during the period being considered divided by the average number of people in that organization during the period” (Price, 1977, p. 15), is a significant problem in the retail industry. Due to these exorbitant costs and additional factors such as loss of employee talent, potential damage to organizational culture, and inability to produce experienced staff, it is in every retailer's best interest to isolate and attempt to control the antecedents of employee turnover. One way in which retailers could reduce turnover is to increase employee–store commitment and ultimately reduce employees’ intention to leave the store (Cohen, 1993, Ingram and Lee, 1990, Iverson and Deery, 1997 and McNeilly and Russ, 1992). Commitment to a store “involves an active relationship with [the store] such that individuals are willing to give something of themselves in order to contribute to the [store's] well being” (Mowday et al., 1979, p. 226). Individuals who are committed to the store for which they work tend to feel loyal, which translates into both a smaller desire and propensity to resign from a position as compared to individuals who feel no such commitment. Accordingly, identifying factors that increase employees’ level of work commitment is a first step to investigating human resource management issues in the retail organization. Although not previously examined, one factor that might be related to work commitment is the amount of similarity that exists between the employee's self-image and the store's image. Individuals possess beliefs regarding who they think they are as people that are referred to as self-concepts or self-images (Rosenberg, 1979). Furthermore, individuals tend to possess similar beliefs regarding retail stores. Beliefs about the characteristics a store possesses collectively form what is known as that store's image (Martineau, 1958, Keaveney and Hunt, 1992 and Zimmer and Golden, 1988). From a consumer perspective, research has shown consumers generally like to shop in stores that possess an image similar to their own (Dornoff and Tatham, 1972, Sirgy and Samli, 1985 and Stern et al., 1977). Additionally, research has shown individuals like to work in stores in which they like to shop (Goldsberry et al., 1999). Accordingly, it is logical step to test the notion that individuals like to work in stores that exhibit store images similar to their self-images. Provided with the logic above, the purpose of this study is to investigate the relationships among the employee's ideal self-image/store image congruence, commitment, and employee intention to leave. In the following section, we utilize the concepts of self-image/store image congruence (Dornoff and Tatham, 1972, Sirgy and Samli, 1985 and Sirgy et al., 1989), consumer identification (Bhattacharya and Sen, 2003), organization identification (Dutton et al., 1994), and salesperson job satisfaction and commitment (Brown and Peterson, 1993 and Mowday et al., 1979) to develop hypotheses that form a theoretically integrated model. This proposed model can be seen in Fig. 1.