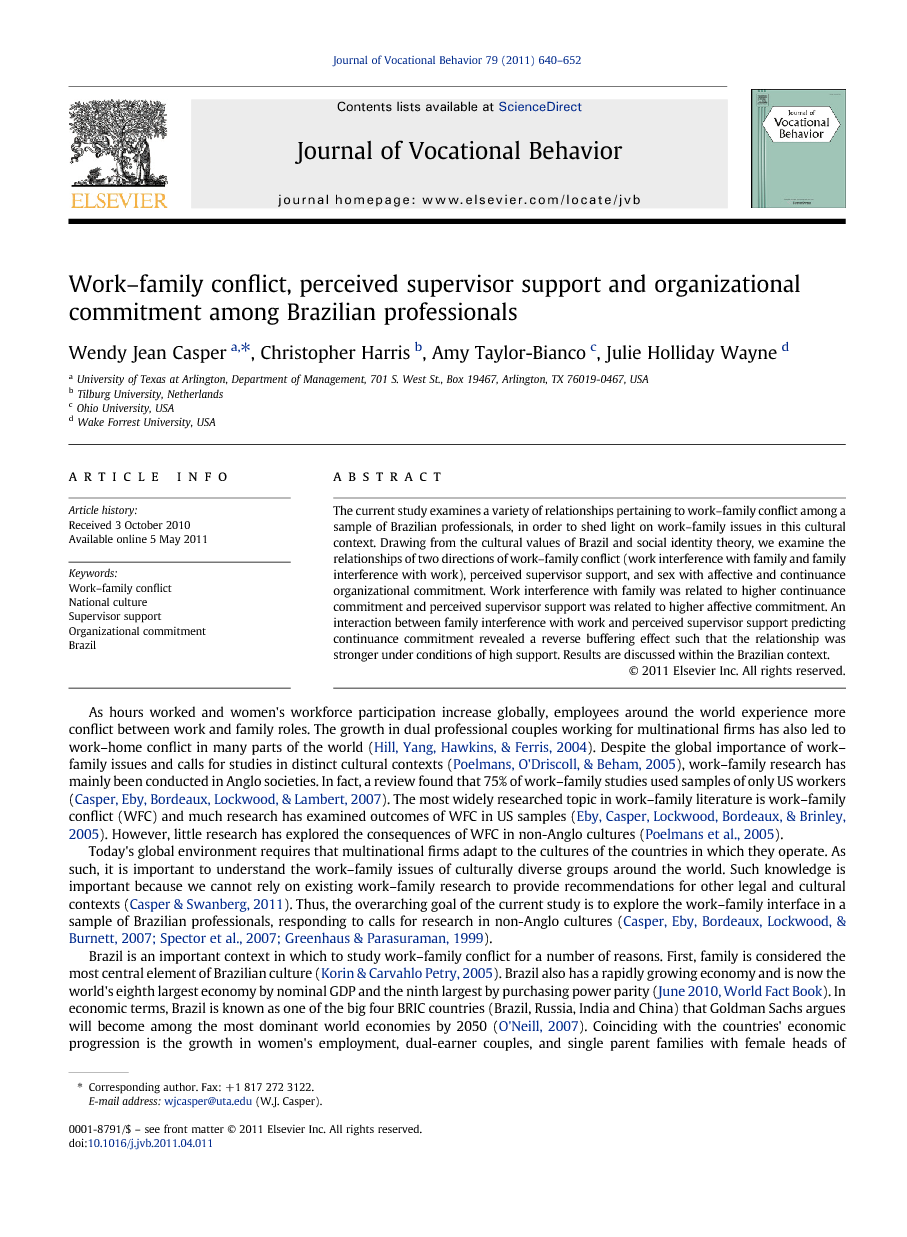 The current study examines a variety of relationships pertaining to work–family conflict among a sample of Brazilian professionals, in order to shed light on work–family issues in this cultural context. Drawing from the cultural values of Brazil and social identity theory, we examine the relationships of two directions of work–family conflict (work interference with family and family interference with work), perceived supervisor support, and sex with affective and continuance organizational commitment. Work interference with family was related to higher continuance commitment and perceived supervisor support was related to higher affective commitment. An interaction between family interference with work and perceived supervisor support predicting continuance commitment revealed a reverse buffering effect such that the relationship was stronger under conditions of high support. Results are discussed within the Brazilian context.

As hours worked and women's workforce participation increase globally, employees around the world experience more conflict between work and family roles. The growth in dual professional couples working for multinational firms has also led to work–home conflict in many parts of the world (Hill, Yang, Hawkins, & Ferris, 2004). Despite the global importance of work–family issues and calls for studies in distinct cultural contexts (Poelmans, O'Driscoll, & Beham, 2005), work–family research has mainly been conducted in Anglo societies. In fact, a review found that 75% of work–family studies used samples of only US workers (Casper, Eby, Bordeaux, Lockwood, & Lambert, 2007). The most widely researched topic in work–family literature is work–family conflict (WFC) and much research has examined outcomes of WFC in US samples (Eby, Casper, Lockwood, Bordeaux, & Brinley, 2005). However, little research has explored the consequences of WFC in non-Anglo cultures (Poelmans et al., 2005). Today's global environment requires that multinational firms adapt to the cultures of the countries in which they operate. As such, it is important to understand the work–family issues of culturally diverse groups around the world. Such knowledge is important because we cannot rely on existing work–family research to provide recommendations for other legal and cultural contexts (Casper & Swanberg, 2011). Thus, the overarching goal of the current study is to explore the work–family interface in a sample of Brazilian professionals, responding to calls for research in non-Anglo cultures (Casper et al., 2007, Spector et al., 2007 and Greenhaus and Parasuraman, 1999). Brazil is an important context in which to study work–family conflict for a number of reasons. First, family is considered the most central element of Brazilian culture (Korin & Carvahlo Petry, 2005). Brazil also has a rapidly growing economy and is now the world's eighth largest economy by nominal GDP and the ninth largest by purchasing power parity (June 2010, World Fact Book). In economic terms, Brazil is known as one of the big four BRIC countries (Brazil, Russia, India and China) that Goldman Sachs argues will become among the most dominant world economies by 2050 (O'Neill, 2007). Coinciding with the countries' economic progression is the growth in women's employment, dual-earner couples, and single parent families with female heads of household (Lobel, 2009). Between 1985 and 2002 women's participation in the workforce in Brazil grew from 32 to 40% (Bruschini, 2007) with women constituting 56.5% of people employed in Brazil in 2005 (IBGE, 2005a). All of these conditions make Brazil a key country to explore the work–family interface. The current study extends past research in several ways. First, we explore the relationship between WFC and work outcomes using an understudied sample of Brazilian professionals. This is important because most work–family research has been conducted in Anglo countries and the few studies of WFC in non-Anglo countries have most often been conducted in Asia (e.g., Yang, Chen, Choi, & Zou, 2000). Second, drawing from an understanding of the sex role norms for men and women in Brazil, we explore sex differences in work–family conflict. Third, we explore whether experiences of work–family conflict among Brazilian professionals relate to their organizational commitment. We do so because a study of the world's ten largest economies indicates that Brazilians are the most committed to their organizations (79%), ranking above the US at sixth (67%) (Towers Perrin, 2007). Whereas research in Anglo cultures suggests that work–family conflict is negatively related to organizational commitment (Allen et al., 2000 and Casper et al., 2002), no studies we are aware of have examined commitment as an outcome of WFC in Latin cultures. Given Brazil's notably high organizational commitment relative to other countries, we deemed it a relevant work attitude to consider. Fourth, the only research we are aware of on WFC in Latin cultures has focused on work interference with family exclusively (Spector et al., 2007). Because of the centrality of family in the Brazilian culture (Korin & Carvahlo Petry, 2005), one should also consider whether family interference with work relates to Brazilian professionals' work attitudes. Finally, in the US, research strongly suggests that support, particularly from one's supervisor, serves a buffering role in the job stressor–strain relationship (Cohen and Willis, 1985 and Viswesvaran et al., 1999). In the paternalistic, bureaucratic, hierarchical structures that prevail in Brazil (Matos, 1996), perceived supervisor support is likely important to whether WIF and FIW influence a worker's commitment to his/her organization. In short, the goals of our study are to use a unique sample of Brazilian professionals (i) to examine sex differences in the experiences of FIW and WIF, (ii) to explore the influences of FIW, WIF, and perceived supervisor support on organizational commitment, (iii) to make informed predictions about these relationships in a Brazilian context, and (iv) to examine whether similar relationships are found as have been reported previously for Anglo samples (Allen et al., 2000 and Casper et al., 2002). Thus, our study examines the generalizability of work–family relationships beyond an Anglo context and addresses the work–family concerns of an understudied population. Next, we contextualize the study by providing a description of the Brazilian legal, public policy, structural, and cultural environment which likely influence the work–family experiences of Brazilian professionals. From this backdrop, we develop hypotheses about sex differences in work–family interference. We also hypothesize about the relationship of WIF and FIW to organizational commitment and the moderating roles of sex and supervisor support. Finally, we describe our methodology, results, and discuss our findings and their implications.

The current study suggests the importance of cultural context in studying work–family conflict, and explores the relationship between work–family conflict and its outcomes in an important economy, Brazil. There were similarities between this study's findings and those in Anglo cultures such as the asymmetrical nature of work and family interference and lack of sex differences. Other findings, however, differed from prior research conducted in the US. For example, WIF predicted continuance but not affective commitment, suggesting potential differences in the meaning of the “need” to keep one's job in a diffuse, collectivistic, family-centered culture relative to a specific, individualistic, and work-centered culture. Also, the finding of a reverse buffering effect for supervisor support stands in direct contrast to the buffering effect commonly found in US samples. Thus, the buffering effects of supervisor support may differ across cultures. These differences between past findings in Anglo samples and the current Brazilian sample may reflect diverse cultural norms and expectations which may lead to different interpretations of and meanings to the various constructs we examine. Although the current study begins to shed light on work–family conflict in Brazil, more research is needed to understand work–family conflict in the many diverse cultures in which individuals work.