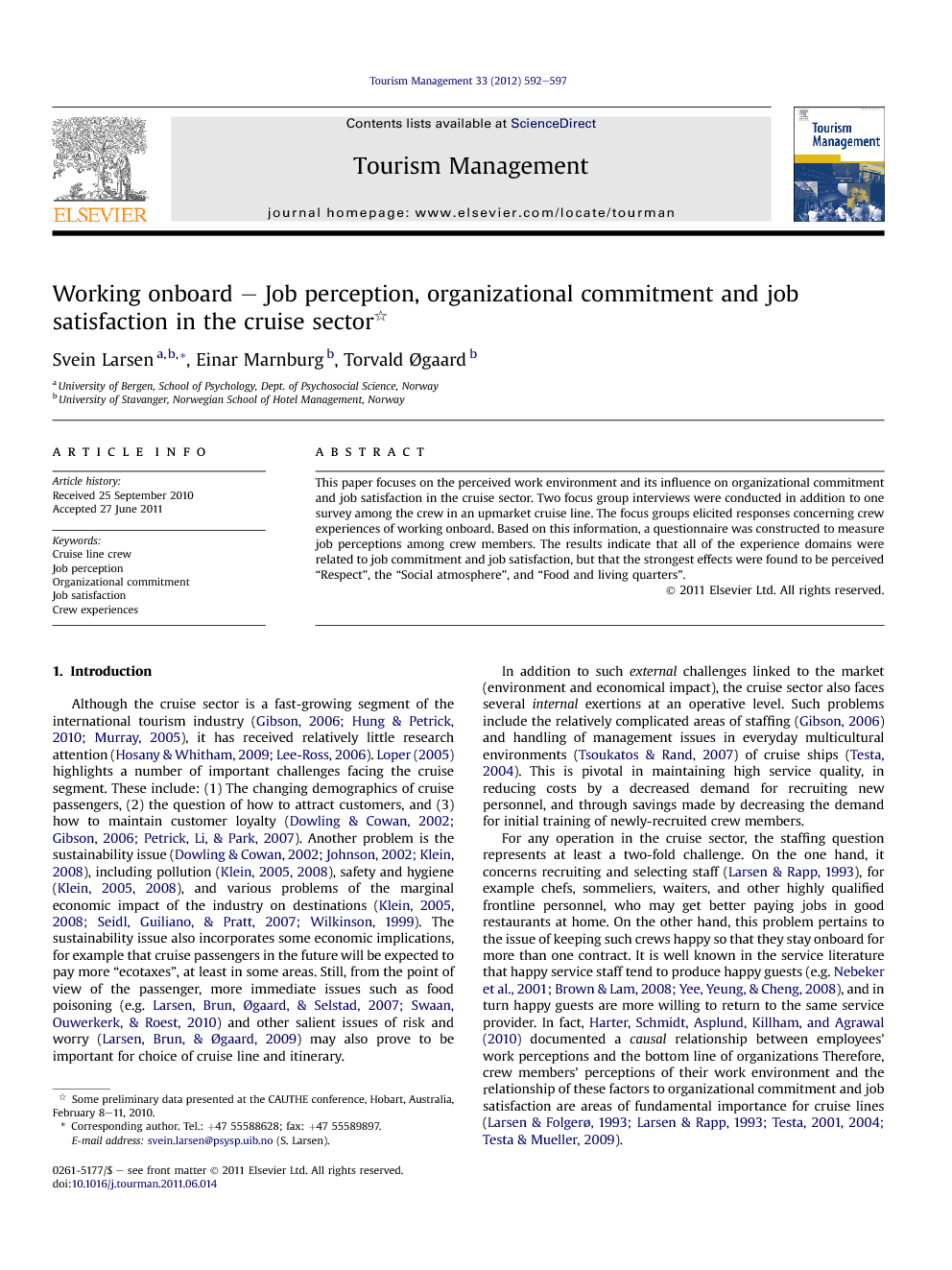 This paper focuses on the perceived work environment and its influence on organizational commitment and job satisfaction in the cruise sector. Two focus group interviews were conducted in addition to one survey among the crew in an upmarket cruise line. The focus groups elicited responses concerning crew experiences of working onboard. Based on this information, a questionnaire was constructed to measure job perceptions among crew members. The results indicate that all of the experience domains were related to job commitment and job satisfaction, but that the strongest effects were found to be perceived “Respect”, the “Social atmosphere”, and “Food and living quarters”.

Although the cruise sector is a fast-growing segment of the international tourism industry (Gibson, 2006, Hung and Petrick, 2010 and Murray, 2005), it has received relatively little research attention (Hosany and Witham, 2009 and Lee-Ross, 2006). Loper (2005) highlights a number of important challenges facing the cruise segment. These include: (1) The changing demographics of cruise passengers, (2) the question of how to attract customers, and (3) how to maintain customer loyalty (Dowling & Cowan, 2002; Gibson, 2006 and Petrick et al., 2007). Another problem is the sustainability issue (Dowling & Cowan, 2002; Johnson, 2002 and Klein, 2008), including pollution (Klein, 2005 and Klein, 2008), safety and hygiene (Klein, 2005 and Klein, 2008), and various problems of the marginal economic impact of the industry on destinations (Klein, 2005, Klein, 2008, Seidl et al., 2007 and Wilkinson, 1999). The sustainability issue also incorporates some economic implications, for example that cruise passengers in the future will be expected to pay more “ecotaxes”, at least in some areas. Still, from the point of view of the passenger, more immediate issues such as food poisoning (e.g. Larsen et al., 2007 and Swaan et al., 2010) and other salient issues of risk and worry (Larsen, Brun, & Øgaard, 2009) may also prove to be important for choice of cruise line and itinerary. In addition to such external challenges linked to the market (environment and economical impact), the cruise sector also faces several internal exertions at an operative level. Such problems include the relatively complicated areas of staffing (Gibson, 2006) and handling of management issues in everyday multicultural environments (Tsoukatos & Rand, 2007) of cruise ships (Testa, 2004). This is pivotal in maintaining high service quality, in reducing costs by a decreased demand for recruiting new personnel, and through savings made by decreasing the demand for initial training of newly-recruited crew members. For any operation in the cruise sector, the staffing question represents at least a two-fold challenge. On the one hand, it concerns recruiting and selecting staff (Larsen & Rapp, 1993), for example chefs, sommeliers, waiters, and other highly qualified frontline personnel, who may get better paying jobs in good restaurants at home. On the other hand, this problem pertains to the issue of keeping such crews happy so that they stay onboard for more than one contract. It is well known in the service literature that happy service staff tend to produce happy guests (e.g. Nebeker et al., 2001; Brown and Lam, 2008 and Yee et al., 2008), and in turn happy guests are more willing to return to the same service provider. In fact, Harter, Schmidt, Asplund, Killham, and Agrawal (2010) documented a causal relationship between employees’ work perceptions and the bottom line of organizations Therefore, crew members’ perceptions of their work environment and the relationship of these factors to organizational commitment and job satisfaction are areas of fundamental importance for cruise lines ( Larsen and Folgerø, 1993, Larsen and Rapp, 1993, Testa, 2001, Testa, 2004 and Testa and Mueller, 2009).

The most prevailing themes were those pertaining to the topics of “Getting respect for what we do” and “Social support” – being supported as a valued member of the service team onboard. While several crew members indicated that the perception of being respected or supported was not at all absent onboard, they simultaneously indicated that a prevalent experience was that very often crew members were just taken for granted. One crew member explicitly said that (s)he was only noticed by the supervisor if something went wrong; one’s everyday high standard performance was rarely noticed. Another important theme concerned “Free time and length of contract”. Crew members maintained that they would sometimes not get permission to go ashore and get free time away from the ship. This was seen as a token of lack of flexibility on the part of the supervisors. Some, particularly from frontline personnel in the ships’ maritime sector, also claimed that contracts were too long, or as one informant phrased it, “Working onboard here is Monday. Every day is Monday for 9 months”. A fourth recurring theme concerned “Physical aspects” of the job setting onboard. The first of these physical aspects concerned money (“I work here for the money”), while a second theme indicated a certain feeling of powerlessness and worry concerning the recruiting office and the required medical tests needed before getting a contract. A third issue in this group of aspects was related to living quarters onboard. The following is a direct quote from one crew member, who anonymously left a letter to the researcher which said (original grammar and spelling), “…. I just want to inform you the living condition of the other crew member specially their living quarters it’s been discussed before thar some of the sleeping bunks or they are sleeping on are not on the standard some are very close to the ceiling they cannot even seat straight…”All of the original 23 items developed to tap crew perceptions were factor analyzed using the principal component technique (Varimax rotation). This explorative method yielded a solution with five factors having Eigenvalues above one. One item was excluded for unclear wording (negative sentence), and one item was excluded because it did not fill the inclusion criterion of a factor loading above .5 on any of the factors. This procedure gave a relatively unitary solution for the remaining 21 items, with only a few items (items 2, 7, & 15; see Table 1) loading > .5 in more than one factor.As can be seen from Table 1, approximately 68% of the variance in job experiences was explained with the current factor solution. Factor 1 was labeled “Supervisor respect and fairness” (12 items, α = .92), Factor 2 was labeled “Social atmosphere: Guests and friends” (five items, α = .79), Factor 3 was labeled “See the world and earn money” (three items, α = .76), Factor 4 was labeled “physical aspects” (two items, α = .63, r = .50), and Factor 5 was labeled “Supervisor flexibility” (two items, α = .64, r = .47). In order to inspect the validity of the measures, we included one validation question in our questionnaire: “Frankly, I just love to work for this company”. This item is best conceived of as an organizational commitment item (but it is not included in the Mowday et al. (1979) scale). This item should therefore correlate most strongly with the OC scale and second highest with the JS scale, but it should also correlate moderately, but positively, with the job perception scales. As can be seen from Table 2, the validation item correlated significantly with both JC (r = .82, p < .01) and JS (r = .63, p < .01). As expected, the correlation of this item with the job perception scales was significantly lower (all rs between .19 and .45, p < .01). This indicates that job perceptions, as they are measured here, reflect aspects of work life onboard other than both job commitment and job satisfaction do, which in turn can be interpreted as a sign of these measures’ content and discriminant validities.The mean scores on all factors measuring job experiences were above four on the seven-point scale, indicating that the crew generally judge the job perception factors included in this study to be relatively positive. As can be seen from Fig. 1, both non-supervising crew and crew members who indicated that they had some supervisory tasks onboard obtained relatively high scores. Fig. 1 also shows that the two groups are similar in the structure of responses, indicating that they are similar with respect to job perceptions, except that for the supervising crew, the “See the world” experience seems less important (F (1,188) = 28.72, p = .000; all other differences were non significant). Although the supervising crew (mean age 35.1) were somewhat older than the non-supervising crew (mean age 31.7) (F (1,180) = 5.75, p = .018), the correlation between this job perception factor (“See the world”) and age was not significant (r = 004, p = .96), which excludes age as a factor that could account for this difference. There was also an even distribution of gender in the two groups (χ2 = .0.43, n.s.), which excludes gender as an explanation.Using a simultaneous entry multiple regression method, a significant model was found for the relationships between job perceptions and OC (see Table 3), and for the relationships between job perceptions and JC (see Table 4). While all job perception scales contributed to explaining variance in organizational commitment, only three variables, “Supervisor respect and fairness”, “Social atmosphere: Guests and friends”, and “Supervisor flexibility” contributed significantly to explaining the variance in job satisfaction. The total explained variance was 50% for OC, and 34.4% for JC.