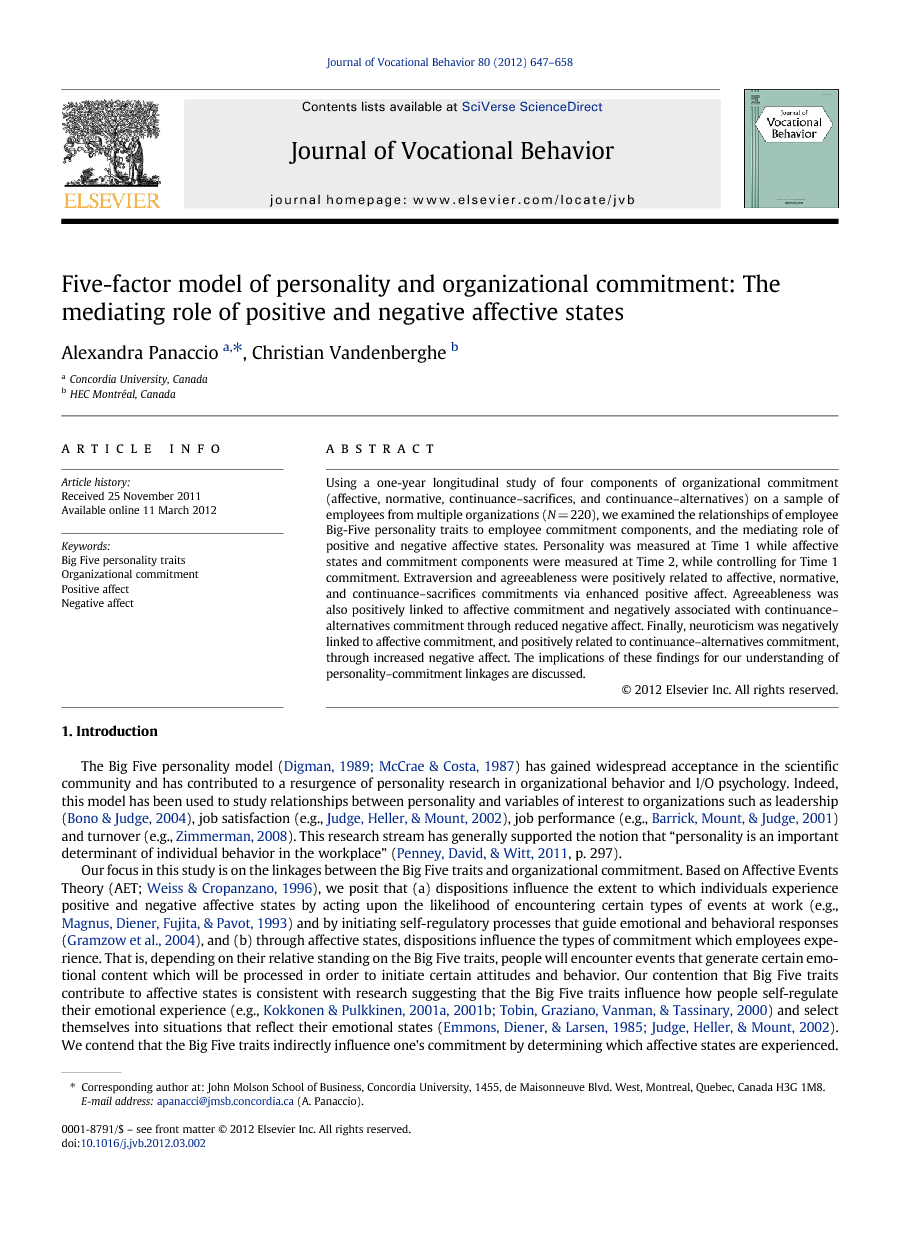 The Big Five personality model (Digman, 1989 and McCrae and Costa, 1987) has gained widespread acceptance in the scientific community and has contributed to a resurgence of personality research in organizational behavior and I/O psychology. Indeed, this model has been used to study relationships between personality and variables of interest to organizations such as leadership (Bono & Judge, 2004), job satisfaction (e.g., Judge, Heller, & Mount, 2002), job performance (e.g., Barrick, Mount, & Judge, 2001) and turnover (e.g., Zimmerman, 2008). This research stream has generally supported the notion that “personality is an important determinant of individual behavior in the workplace” (Penney, David, & Witt, 2011, p. 297). Our focus in this study is on the linkages between the Big Five traits and organizational commitment. Based on Affective Events Theory (AET; Weiss & Cropanzano, 1996), we posit that (a) dispositions influence the extent to which individuals experience positive and negative affective states by acting upon the likelihood of encountering certain types of events at work (e.g., Magnus, Diener, Fujita, & Pavot, 1993) and by initiating self-regulatory processes that guide emotional and behavioral responses (Gramzow et al., 2004), and (b) through affective states, dispositions influence the types of commitment which employees experience. That is, depending on their relative standing on the Big Five traits, people will encounter events that generate certain emotional content which will be processed in order to initiate certain attitudes and behavior. Our contention that Big Five traits contribute to affective states is consistent with research suggesting that the Big Five traits influence how people self-regulate their emotional experience (e.g., Kokkonen and Pulkkinen, 2001a, Kokkonen and Pulkkinen, 2001b and Tobin et al., 2000) and select themselves into situations that reflect their emotional states (Emmons et al., 1985 and Judge, Heller and Mount, 2002). We contend that the Big Five traits indirectly influence one's commitment by determining which affective states are experienced. Although research has widely investigated the situational antecedents of commitment (Meyer et al., 2002 and Morrow, 2011), much less attention has been given to its dispositional antecedents. Moreover, previous research on the relationships between the Big Five traits and commitment has been extremely limited (for an exception, see Erdheim, Wang, & Zickar, 2006), and mostly cross-sectional. The present study intends to contribute to commitment theory by shedding light on the mechanisms through which personality may predispose employees to experience specific types of commitment. Indeed, scholars have called for increased efforts to understand the intervening processes in these relationships (e.g., Penney et al., 2011). As explained below, this study relies on a multidimensional view of commitment. To overcome the limitations of prior research, we opted for a longitudinal design in which the influence of the Big Five traits on commitment through affect was examined while accounting for initial commitment levels.

We first examined the distinctiveness of our study variables using confirmatory factor analysis (CFA) via LISREL 8.72 (Jöreskog, Sörbom, Du Toit, & Du Toit, 2001) with a covariance matrix as input and the maximum likelihood method of estimation. As threats to discriminant validity may particularly appear when variables are measured at the same occasion, we examined the structure of Time 1 and Time 2 data separately. To reduce the complexity of our measurement models, we combined items to create three indicators per construct for those measured by more than three items (Landis, Beal, & Tesluk, 2000). We then tested and compared our theoretical models against more parsimonious solutions using χ2 difference tests (Bentler & Bonett, 1980). As can be seen from Table 1, the hypothesized nine-factor model comprising the Big Five traits and the four commitment dimensions at Time 1 yielded a good fit to the data: χ2 (288) = 599.75, p < .001, CFI = .91, IFI = .91, RMR = .061, RMSEA = .067, and proved superior (p < .001) to any more parsimonious representations of the data. Similarly, the hypothesized six-factor model comprising positive and negative affect and the four commitment components at Time 2 fit the data well: χ2 (120) = 285.18, p < .001, CFI = .95, IFI = .95, RMR = .068, RMSEA = .076, and proved superior (p < .001) to any simpler representation of the data.