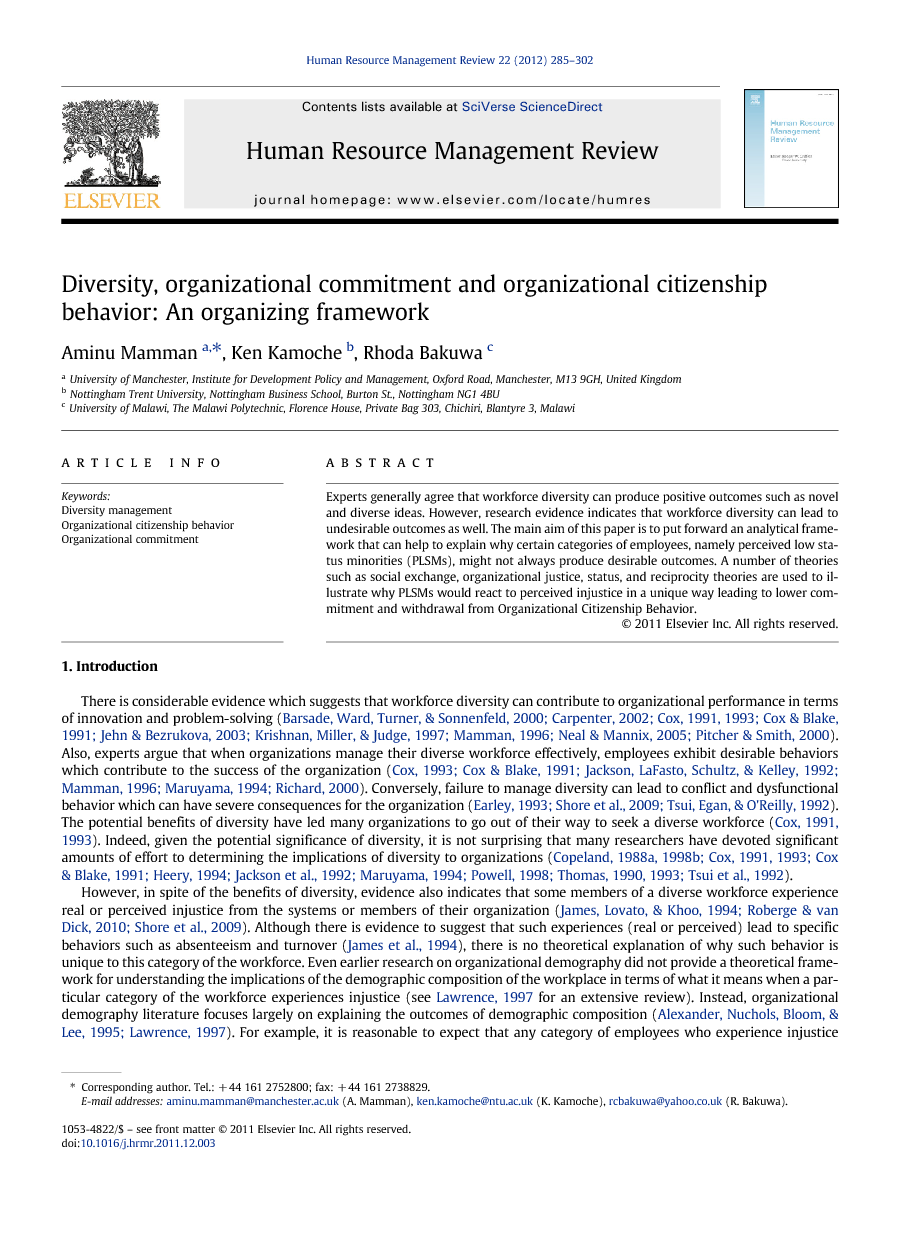 Experts generally agree that workforce diversity can produce positive outcomes such as novel and diverse ideas. However, research evidence indicates that workforce diversity can lead to undesirable outcomes as well. The main aim of this paper is to put forward an analytical framework that can help to explain why certain categories of employees, namely perceived low status minorities (PLSMs), might not always produce desirable outcomes. A number of theories such as social exchange, organizational justice, status, and reciprocity theories are used to illustrate why PLSMs would react to perceived injustice in a unique way leading to lower commitment and withdrawal from Organizational Citizenship Behavior.

There is considerable evidence which suggests that workforce diversity can contribute to organizational performance in terms of innovation and problem-solving (Barsade et al., 2000, Carpenter, 2002, Cox, 1991, Cox, 1993, Cox and Blake, 1991, Jehn and Bezrukova, 2003, Krishnan et al., 1997, Mamman, 1996, Neal and Mannix, 2005 and Pitcher and Smith, 2000). Also, experts argue that when organizations manage their diverse workforce effectively, employees exhibit desirable behaviors which contribute to the success of the organization (Cox, 1993, Cox and Blake, 1991, Jackson et al., 1992, Mamman, 1996, Maruyama, 1994 and Richard, 2000). Conversely, failure to manage diversity can lead to conflict and dysfunctional behavior which can have severe consequences for the organization (Earley, 1993, Shore et al., 2009 and Tsui et al., 1992). The potential benefits of diversity have led many organizations to go out of their way to seek a diverse workforce (Cox, 1991 and Cox, 1993). Indeed, given the potential significance of diversity, it is not surprising that many researchers have devoted significant amounts of effort to determining the implications of diversity to organizations (Copeland, 1988a, Copeland, 1988b, Cox, 1991, Cox, 1993, Cox and Blake, 1991, Heery, 1994, Jackson et al., 1992, Maruyama, 1994, Powell, 1998, Thomas, 1990, Thomas, 1993 and Tsui et al., 1992). However, in spite of the benefits of diversity, evidence also indicates that some members of a diverse workforce experience real or perceived injustice from the systems or members of their organization (James et al., 1994, Roberge and van Dick, 2010 and Shore et al., 2009). Although there is evidence to suggest that such experiences (real or perceived) lead to specific behaviors such as absenteeism and turnover (James et al., 1994), there is no theoretical explanation of why such behavior is unique to this category of the workforce. Even earlier research on organizational demography did not provide a theoretical framework for understanding the implications of the demographic composition of the workplace in terms of what it means when a particular category of the workforce experiences injustice (see Lawrence, 1997 for an extensive review). Instead, organizational demography literature focuses largely on explaining the outcomes of demographic composition (Alexander et al., 1995 and Lawrence, 1997). For example, it is reasonable to expect that any category of employees who experience injustice would react in a certain way. However, the point of departure of this paper is to argue that the reaction to real or perceived injustice would vary across categories of a diverse workforce. Nevertheless, there is no adequate theoretical framework which would help in the understanding of this important issue. To address this gap in the literature, we use the notion of a perceived low status minority (PLSM) to understand and theorize why certain categories of employees would react to injustice in a unique way. We conceive the status in this paper to be derived from perception of social identity such as gender, age, ethnicity and nationality. In fact, in a study of the effect of demographic similarity on OCB, Chattopadhyay (1999, p. 285) concluded that, “A central assumption of this research was that employees belonging to some categories are more affected by demographic dissimilarity than are those belonging to other categories because of the concomitant loss of status and other, more tangible rewards.” Indeed, minority status has been recognized as a key variable that affects integration in a social setting (Cohen, 1984, Mummendey et al., 1999, Putallaz et al., 1992 and Roberge and van Dick, 2010). Also, Cohen (1984) argued that status equalization can moderate the effect of diversity outcomes. It is important to point out here that, in this paper, ‘low status minority’ can apply to any category of employees irrespective of gender, ethnicity, disability, and racial background. The salience or relevance of the status of any category of employees will depend on the context and location. Also, in order to properly understand the reaction of a PLSM to real or perceived injustice, we have used the concept of extra-role behavior, namely organization citizenship behavior (OCB), because it is a construct that captures voluntary behavior which would be the initial mode of reaction to injustice before considering, for example, leaving the organization. The term injustice will be used to refer to both real and perceived injustices, given that they can be “in the eye of the beholder.” Therefore, the purpose of this article is to provide a brief review of literature on the subject and advance an organizing framework that will aid in understanding why some categories of employees would be less keen to contribute to the organization beyond the call of duty (in-role behaviour).

In this article, we advanced the idea of a perceived low status minority (PLSM) in the workplace. We made the case for why PLSMs would interpret injustice in a unique way, leading to loss of commitment and withdrawal from organizational citizenship behavior. The increasingly inconsistent evidence on the effect of diversity in the workplace (Jackson et al., 2003 and Roberge and van Dick, 2010) has prompted us to develop a framework that will contribute to the understanding of this important topic. Our framework acknowledges the normative implications of real and perceived injustice in the workplace in terms of withdrawal from desirable behavior (Adams, 1963 and Goodmans, 1974). However, it goes beyond that to clarify why the reaction to injustice would vary with the perceived status of the victim of injustice. Consistent with similar work in the area (Chattopadhyay, 1999), we were able to demonstrate that when PLSMs experience injustice their organizational commitment will be impaired. This will lead to withdrawal from OCB. We have extended research on workforce diversity and organizational demography (e.g. Ibarra, 1995, Jackson et al., 1992, Jackson et al., 2003 and Lawrence, 1997) by providing an exploratory analytical framework that can explain the reasons for the outcomes of workplace diversity. The research in the two areas (i.e. diversity and organizational demography) has provided evidence for the outcomes of workplace diversity (Jackson et al., 2003 and Lawrence, 1997), however evidence for the reasons for such outcomes are disjointed, anecdotal and sometimes outright speculative. In short, there is no analytical framework that can help to understand the processes and outcomes of diversity in the workplace. This article has attempted to fill this gap in the literature. The framework is not holistic in that it does not account for all the variables that will influence PLSMs’ reaction to injustice nor does the framework incorporate other categories of employees, in particular the dominant majority. We believe a holistic model will be too complex to be meaningful. Instead, to move research in this area forward, we incorporate key variables that mediate and moderate PLSMs’ reaction to injustice, namely organizational commitment and organizational and individual contexts. We now discuss the implications of the framework.