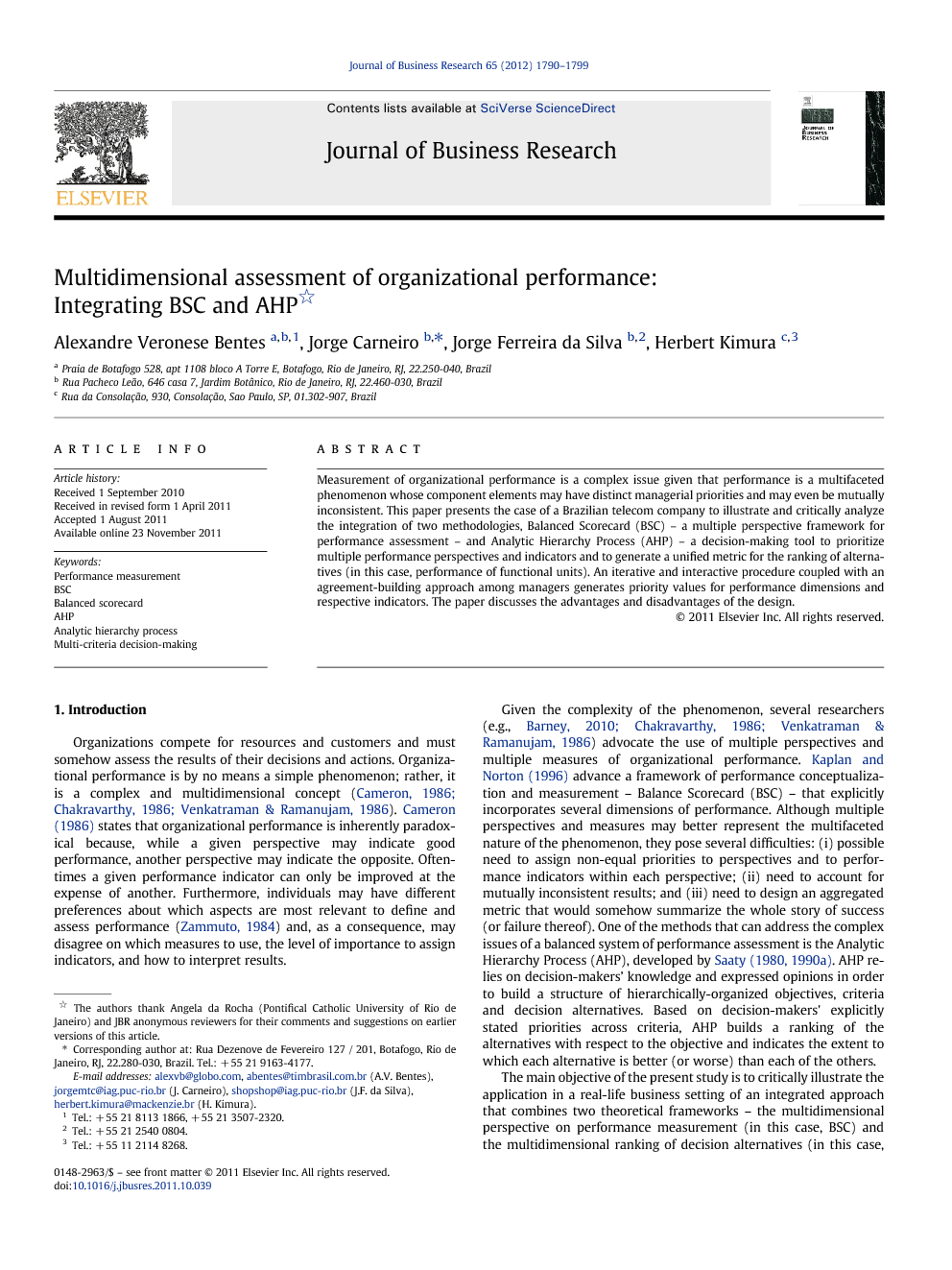 Measurement of organizational performance is a complex issue given that performance is a multifaceted phenomenon whose component elements may have distinct managerial priorities and may even be mutually inconsistent. This paper presents the case of a Brazilian telecom company to illustrate and critically analyze the integration of two methodologies, Balanced Scorecard (BSC) – a multiple perspective framework for performance assessment – and Analytic Hierarchy Process (AHP) – a decision-making tool to prioritize multiple performance perspectives and indicators and to generate a unified metric for the ranking of alternatives (in this case, performance of functional units). An iterative and interactive procedure coupled with an agreement-building approach among managers generates priority values for performance dimensions and respective indicators. The paper discusses the advantages and disadvantages of the design.

Organizations compete for resources and customers and must somehow assess the results of their decisions and actions. Organizational performance is by no means a simple phenomenon; rather, it is a complex and multidimensional concept (Cameron, 1986, Chakravarthy, 1986 and Venkatraman and Ramanujam, 1986). Cameron (1986) states that organizational performance is inherently paradoxical because, while a given perspective may indicate good performance, another perspective may indicate the opposite. Oftentimes a given performance indicator can only be improved at the expense of another. Furthermore, individuals may have different preferences about which aspects are most relevant to define and assess performance (Zammuto, 1984) and, as a consequence, may disagree on which measures to use, the level of importance to assign indicators, and how to interpret results. Given the complexity of the phenomenon, several researchers (e.g., Barney, 2010, Chakravarthy, 1986 and Venkatraman and Ramanujam, 1986) advocate the use of multiple perspectives and multiple measures of organizational performance. Kaplan and Norton (1996) advance a framework of performance conceptualization and measurement – Balance Scorecard (BSC) – that explicitly incorporates several dimensions of performance. Although multiple perspectives and measures may better represent the multifaceted nature of the phenomenon, they pose several difficulties: (i) possible need to assign non-equal priorities to perspectives and to performance indicators within each perspective; (ii) need to account for mutually inconsistent results; and (iii) need to design an aggregated metric that would somehow summarize the whole story of success (or failure thereof). One of the methods that can address the complex issues of a balanced system of performance assessment is the Analytic Hierarchy Process (AHP), developed by Saaty, 1980 and Saaty, 1990a. AHP relies on decision-makers’ knowledge and expressed opinions in order to build a structure of hierarchically-organized objectives, criteria and decision alternatives. Based on decision-makers' explicitly stated priorities across criteria, AHP builds a ranking of the alternatives with respect to the objective and indicates the extent to which each alternative is better (or worse) than each of the others. The main objective of the present study is to critically illustrate the application in a real-life business setting of an integrated approach that combines two theoretical frameworks – the multidimensional perspective on performance measurement (in this case, BSC) and the multidimensional ranking of decision alternatives (in this case, AHP) – in order to comparatively assess the performance of functional subunits within an organization. A subsidiary objective is to extend the external validity of both BSC and AHP by applying those frameworks to a particular industry (telecommunications) and setting (Brazilian environment and managers), which, thus far, the literature has rarely examined. Thus the paper focuses on the practical implementation of an integrated framework, bringing together two well established mechanisms for performance analysis and decision making. Although other studies explore a joint application of AHP and BSC, they typically rely on illustrative hypothetical examples (e.g., Leung, Lam, & Cao, 2006) or on a theoretical discussion of potential uses (e.g., Jovanovic & Krivokapic, 2008). In contrast, this paper examines a real-case implementation of AHP-BSC. Although one can conceive of several levels of organizational performance (e.g., corporate, business unit, functional area, etc.), the present study assesses only the performance of three functional areas in the financial department of a Brazilian privately-held telecommunications company. The contribution of this paper rests on the attempt to address the thorny issue (cf. Venkatraman & Ramanujam, 1986) of organizational performance measurement — in particular, how to (i) make sense of multiple (and often mutually conflicting) perspectives and measures of the phenomenon; (ii) prioritize among them; (iii) reach some synthesized assessment; and (iv) rank-order the level of performance of alternatives under comparative evaluation. A real-life example illustrates the procedure based on agreement-building among managers, which has the additional benefit of enlightening their knowledge as to performance outcomes, thereby developing a shared vision, and fostering a sense of esprit de corps. The study of a Latin American firm is relevant because, as argued by Brenes, Haar, and Requena (2009), the process of internationalization and openness of economies in this region has far-reaching impacts on management practices. In this context, formal structures related to strategy formulation and implementation emerge as fundamental elements for Latin American firms since the mid-1990s (Brenes et al., 2009). When the internal political and economic environment becomes more stable, as in the case of Brazil, formal policies and decision-making tools become more useful. In particular, the analysis of a real application of an integrated BSC and AHP framework to assess performance exemplifies the pattern of progress in Brazilian management practices. The following sections demonstrate the rank-ordering of the overall performance of the functional areas of the financial department of this Brazilian telecommunications company, taking into consideration (i) the relative degree of importance of four distinct perspectives of organizational performance; (ii) the relative degree of importance of performance indicators within each perspective; and (iii) the comparative relative performance of three functional areas in light of a weighted combination of all performance indicators and dimensions.