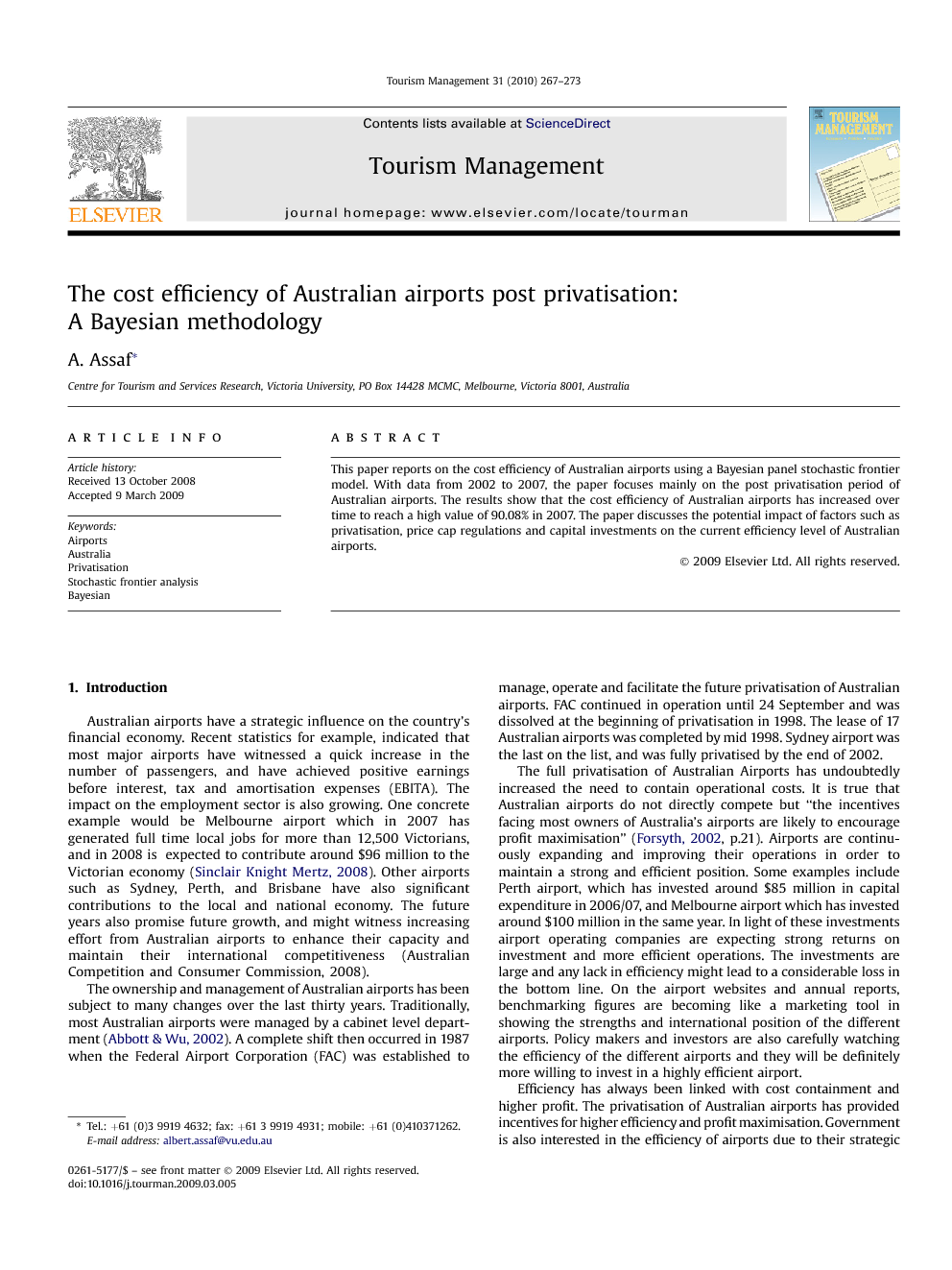 Australian airports have a strategic influence on the country's financial economy. Recent statistics for example, indicated that most major airports have witnessed a quick increase in the number of passengers, and have achieved positive earnings before interest, tax and amortisation expenses (EBITA). The impact on the employment sector is also growing. One concrete example would be Melbourne airport which in 2007 has generated full time local jobs for more than 12,500 Victorians, and in 2008 is expected to contribute around $96 million to the Victorian economy (Sinclair Knight Mertz, 2008). Other airports such as Sydney, Perth, and Brisbane have also significant contributions to the local and national economy. The future years also promise future growth, and might witness increasing effort from Australian airports to enhance their capacity and maintain their international competitiveness (Australian Competition and Consumer Commission, 2008). The ownership and management of Australian airports has been subject to many changes over the last thirty years. Traditionally, most Australian airports were managed by a cabinet level department (Abbott & Wu, 2002). A complete shift then occurred in 1987 when the Federal Airport Corporation (FAC) was established to manage, operate and facilitate the future privatisation of Australian airports. FAC continued in operation until 24 September and was dissolved at the beginning of privatisation in 1998. The lease of 17 Australian airports was completed by mid 1998. Sydney airport was the last on the list, and was fully privatised by the end of 2002. The full privatisation of Australian Airports has undoubtedly increased the need to contain operational costs. It is true that Australian airports do not directly compete but “the incentives facing most owners of Australia's airports are likely to encourage profit maximisation” (Forsyth, 2002, p.21). Airports are continuously expanding and improving their operations in order to maintain a strong and efficient position. Some examples include Perth airport, which has invested around $85 million in capital expenditure in 2006/07, and Melbourne airport which has invested around $100 million in the same year. In light of these investments airport operating companies are expecting strong returns on investment and more efficient operations. The investments are large and any lack in efficiency might lead to a considerable loss in the bottom line. On the airport websites and annual reports, benchmarking figures are becoming like a marketing tool in showing the strengths and international position of the different airports. Policy makers and investors are also carefully watching the efficiency of the different airports and they will be definitely more willing to invest in a highly efficient airport. Efficiency has always been linked with cost containment and higher profit. The privatisation of Australian airports has provided incentives for higher efficiency and profit maximisation. Government is also interested in the efficiency of airports due to their strategic importance and strong contribution to the country economy. Airports are also described as major contributors to the travel and tourism industry. Cejas (2006) and Khadaroo and Seetanah (2007) discuss that airport quality and infrastructures directly affect the first impression that visitors formulate about the level of service in a particular country. More importantly, Cejas (2006) emphasizes that if an airport does not deliver all these services in a highly efficient fashion, then it is most likely that the tourist perception of a holiday would be negative. Statistical evidences on the positive impact of airports on the number of tourists and tourism related jobs were also given by Gillen and Hinsh (2001) in their study on Hamburg airport. For example, using a demand distribution model they showed that an increase in the number of international flights at Hamburg airport by 5.6% resulted in an increase in the number of tourists by around 11,000 tourists and number of jobs in the tourism industry by around 22. Similar conclusions on the positive impact of airport infrastructure on tourism were reported by Khadaroo and Seetanah (2007). Given all the above reasons, it is therefore not surprising why many researchers and policy makers are interested in analysing the efficiency of airports. The literature is rich, and efficiency studies on many of the international airports have been conducted. A recent example is the paper on the efficiency of Italian airports by Barros and Dieke (2007). Some studies in other countries included USA (Gillen and Lall, 2001 and Sarkis and Talluri, 2004), UK (Parker, 1999), and several other European countries. In this paper, the efficiency research on international airports is extended to Australia. In contrast to other countries, only one major study has been published on the efficiency and productivity growth of Australian airports. The paper by Abbott and Wu (2002) has assessed the technical efficiency and technical change of a sample of major Australian airports for the years 1989–1999. So, their efficiency study covered mainly the FAC period, while in this paper, the analysis covers the post FAC period. The study uses the innovative Bayesian frontier methodology to derive the efficiency estimates. In the paper by Abbott and Wu (2002), a non-parametric technique was adopted. The main disadvantage of the non-parametric technique lies in its deterministic nature as it does not take into account the noise in the data. Many researchers overcome this problem by using either the stochastic frontier parametric technique or the bootstrapping methodology. However, the stochastic frontier approach remains more developed in the case of panel data. The use of the Bayesian methodology is also expected to provide statistical advantages over the maximum likelihood method as it allows the inclusion of “prior” information about parameters in inferences. For a more detailed discussion of the advantages of the Bayesian methodology refer to Koop (2003). The paper will proceed as follows. The specific details of the methodology and estimation method are given in Sections 2 and 3. The results and their discussions are then reported in Sections 5 and 6, and the conclusion of the main results and directions for future research are provided in Section 7.

This study provided evidence on the efficiency of the major Australian airports, using a Bayesian stochastic frontier model with time varying assumptions. Inferences from the Bayesian estimation indicated that the efficiency of the different airports has improved over time to reach a value of 87.27% at the end of 2007. Results also indicated that further improvement can be made to achieve and optimum level of scale and to increase the level of efficiency. The study suggested that factors such as privatisation, economic growth, price regulations, location, and quality standards could have contributed to improvement in efficiency. Further improvements might also be expected in the coming few years as more returns on investment is expected to be generated from the major capital investments currently happening at most Australian airports. Private companies are also expected to develop more experience in the management of the different airports and deliver more efficient and accurate services. Future studies might conduct supportive qualitative studies to assess the impact of these factors on efficiency.