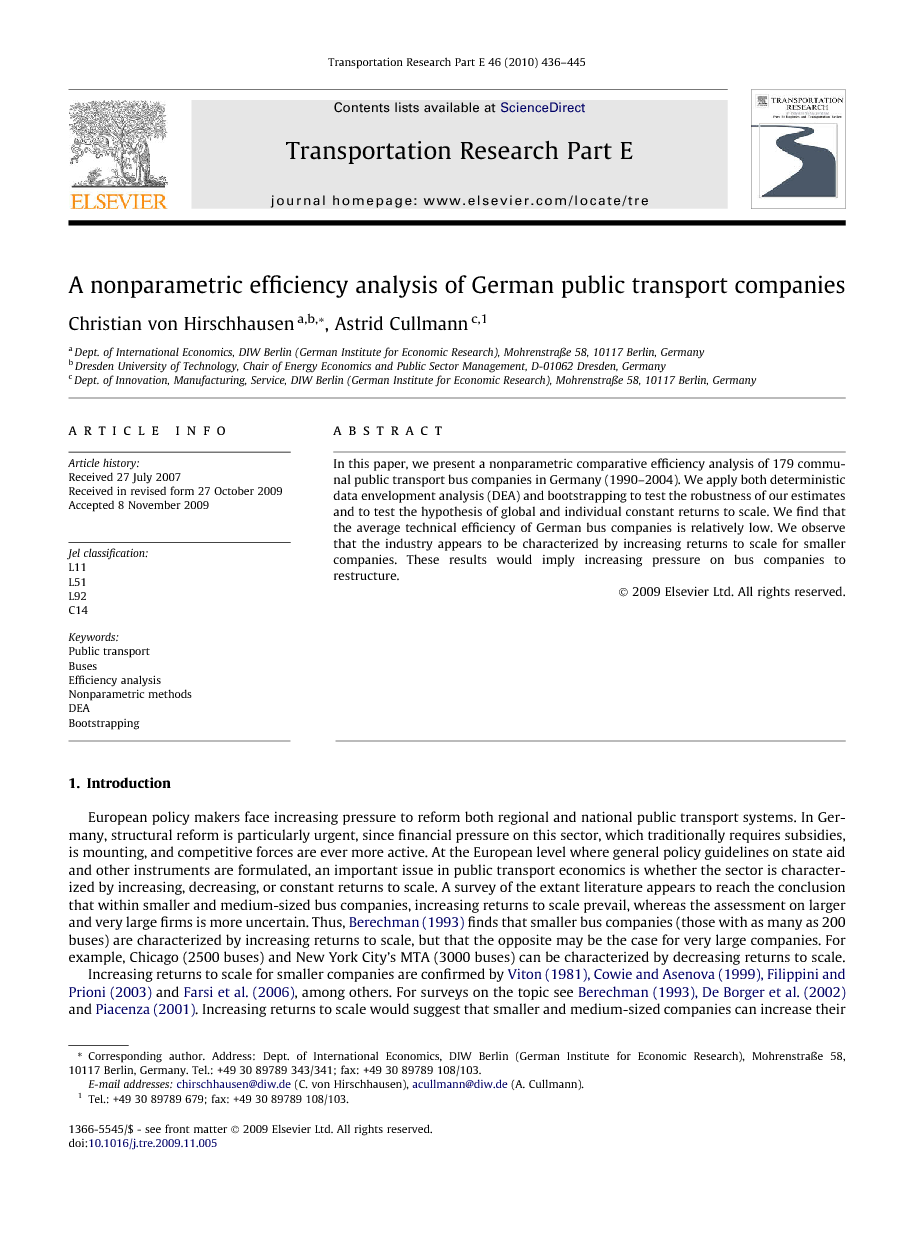 In this paper, we present a nonparametric comparative efficiency analysis of 179 communal public transport bus companies in Germany (1990–2004). We apply both deterministic data envelopment analysis (DEA) and bootstrapping to test the robustness of our estimates and to test the hypothesis of global and individual constant returns to scale. We find that the average technical efficiency of German bus companies is relatively low. We observe that the industry appears to be characterized by increasing returns to scale for smaller companies. These results would imply increasing pressure on bus companies to restructure.

European policy makers face increasing pressure to reform both regional and national public transport systems. In Germany, structural reform is particularly urgent, since financial pressure on this sector, which traditionally requires subsidies, is mounting, and competitive forces are ever more active. At the European level where general policy guidelines on state aid and other instruments are formulated, an important issue in public transport economics is whether the sector is characterized by increasing, decreasing, or constant returns to scale. A survey of the extant literature appears to reach the conclusion that within smaller and medium-sized bus companies, increasing returns to scale prevail, whereas the assessment on larger and very large firms is more uncertain. Thus, Berechman (1993) finds that smaller bus companies (those with as many as 200 buses) are characterized by increasing returns to scale, but that the opposite may be the case for very large companies. For example, Chicago (2500 buses) and New York City’s MTA (3000 buses) can be characterized by decreasing returns to scale. Increasing returns to scale for smaller companies are confirmed by Viton, 1981, Cowie and Asenova, 1999 and Filippini and Prioni, 2003 and Farsi et al. (2006), among others. For surveys on the topic see Berechman, 1993 and De Borger et al., 2002 and Piacenza (2001). Increasing returns to scale would suggest that smaller and medium-sized companies can increase their efficiency by growing, merging with other companies, or achieving the synergy effects in other ways. In fact, a concentration of smaller firms towards larger units can be observed in countries that have liberalized their public bus sectors, such as the UK (Cowie, 2002). Graham et al. (2003) who examined economies of scale and density in 17 urban rail transport systems around the world suggest constant returns to scale but increasing returns to density. The German public transport system is traditionally small-scale, with about 1000 mainly communal service providers. Contrary to other countries, efficiency benchmarking has not been intensively carried out for the sector at large.2 There is one study conducted by Hanusch and Cantner (1991) analyzing the performance of German bus companies within a multiple-sector analysis. It is generally considered that a lack of transparency and an information asymmetry exist between the principal (public policy maker, “Aufgabenträger”) and the agent (public transport company). Public transport companies argue about specific institutional, economic and structural factors that justify a high level of subsidies. Cost-based compensation instead of incentive-based mechanisms still predominates. Traditionally, public bus transport was provided at the communal level, and rail transport was formerly the responsibility of the Federal State Railway (responsibility for public local rail transport was transferred to the 16 Federal States in 1994 under “Regionalization”). Public transport has a low cost coverage (estimated around 40%), with the bus system faring somewhat better than the rail system. Both bus and rail transport are highly regulated; in particular, bus licenses for regional transport services are difficult to obtain. As more local concessions are tendered, new entrants or larger bus companies obtain higher market shares. Communal bus companies also try to cooperate across borders, e.g. to obtain economies in third-party procurement. Regarding the incentive structures, it is fair to say that – as in other countries – the industry is unionized, which is also due to the dominant communal ownership structure. Yet there has been a general tendency to reduce employment over the period under consideration. Bus companies are “agents” and act on behalf of a “principal”, regional or city administrations (“Aufgabenträger”) who order a certain level of service. Changing network length, therefore, is not in the simple discretionary decision power of the bus companies. This paper provides a preliminary nonparametric efficiency benchmarking of public transport in Germany between 1990 and 2004 to an unbalanced sample of 179 medium and larger bus transportation companies. We apply recent theoretical developments in statistical inference for nonparametric efficiency estimation. In empirical efficiency analysis the tradeoff always exists between the restrictive (but when consistent, more efficient) parametric and the more robust (but inefficient) nonparametric approaches. There exists a wide range of literature comparing both approaches. Thus, Lovell (1993) provides a detailed introduction. Ferrier and Lovell (1990) e.g. assess the strength and weakness of both approaches by means of an empirical cost efficiency analysis in banking. Bjurek et al. (1990) compare both approaches within the framework of service production. A more recent example is Cullinane et al. (2006) who provide a technical efficiency analysis of container ports comparing the parametric stochastic frontier analysis (SFA) and DEA as a nonparametric approach, pointing out the strengths and weaknesses associated with each approach. The goal of this paper is to provide an objective assessment of the comparative efficiency scores of public transport companies, thus decreasing the information asymmetry, and to contribute constructive input to the debate on public transport reforms. The paper is structured as follows: the next section describes the methodology, focusing on the latest developments of nonparametric estimation. The robustness of the results is analyzed by means of bootstrapping algorithms, and newly-developed returns to scale tests.3 Section 3 introduces the data and the concrete model specifications, with a focus on supply-oriented models using seat and bus kilometers as different output variables. Most of the results confirm our initial hypothesis of increasing scale economies for small and medium-sized bus companies (Section 4). Section 5 concludes.

Efficiency analysis is an important instrument because it provides information to transportation companies and policy makers alike. It is also useful to reduce the information asymmetry between regulator and transport companies, and thus supports the policy process in this important sector. This paper applied nonparametric methods to analyze the technical efficiency of German public bus transport companies, using traditional approaches, such as simple CRS- and VRS-DEA, and advanced approaches for statistical inference techniques such as bias correction and returns-to-scale tests using bootstrapping mechanisms. We find increasing returns to scale for small- and medium-sized companies. This result is independent of the model formulation, and it also holds across different output variables (seat km and bus km). The introduction of a density index has a significant effect on the efficiency scores. Our findings imply that the structure of the German public bus sectors may be improved by exploiting the scale economies. Small- and medium-sized companies clearly are at a disadvantage and should seek synergy effects primarily with neighboring companies. This may involve an optimization of the supply chain, e.g. joint sourcing of buses, but opportunities exist to exploit other cost-reducing measures such as sharing repair garages, joint purchase of pollution control equipment to modify existing fleets. Last but not least, mergers between public bus companies should not be excluded as a policy option, even though they are more difficult institutionally.