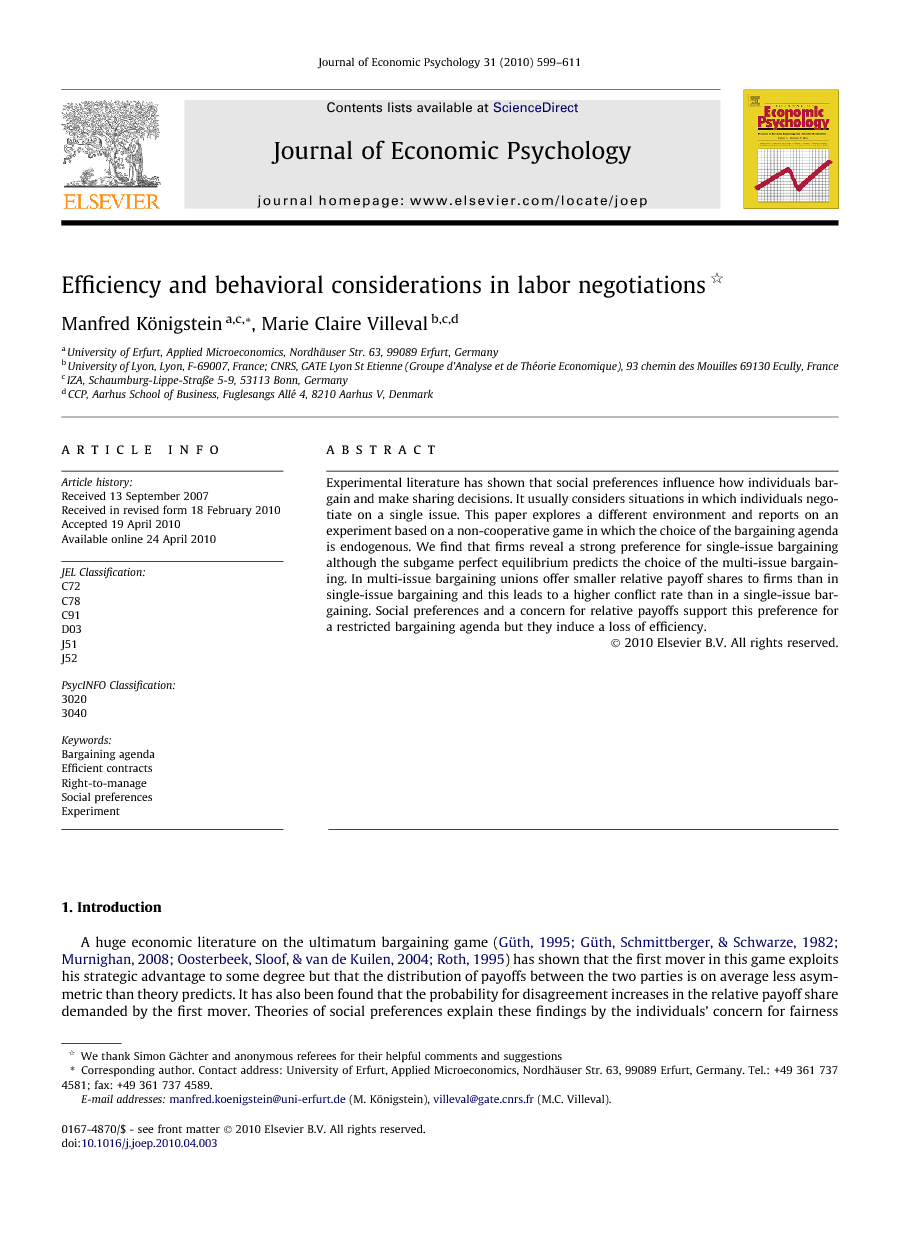 A huge economic literature on the ultimatum bargaining game (Güth, 1995, Güth et al., 1982, Murnighan, 2008, Oosterbeek et al., 2004 and Roth, 1995) has shown that the first mover in this game exploits his strategic advantage to some degree but that the distribution of payoffs between the two parties is on average less asymmetric than theory predicts. It has also been found that the probability for disagreement increases in the relative payoff share demanded by the first mover. Theories of social preferences explain these findings by the individuals’ concern for fairness and their degree of inequity aversion (Bolton and Ockenfels, 2000 and Fehr and Schmidt, 1999). Interestingly, Charness and Rabin (2002) provides an alternative theory of social preferences in which people care about efficiency (see also experimental evidence in Engelmann & Strobel (2004). We explore the hypothesis that social preferences may play a role not only in the bargaining behavior of the players but also in the choice of the bargaining agenda, i.e. the issues on which players have to bargain. We study whether social preferences are aligned with a search for higher efficiency in the determination of this bargaining agenda. Labor negotiations offer a natural setting for studying this question. The canonical models of labor negotiations typically oppose two main approaches of the bargaining agenda (Booth, 1995): the “right-to-manage” model in which the firm bargains with its union about wage but retains the right to determine employment (Nickell & Andrews, 1983) and the “efficient bargaining” model that assumes that both, wage and employment, are bargained simultaneously (McDonald & Solow, 1981). The larger bargaining agenda reaches higher efficiency through a higher employment level. In a more general context, early experiments on bilateral monopoly have tested alternative bargaining models and concluded that the outcome of the joint negotiation is very close to the Pareto optimal solution whereas bargaining under price leadership leads to outcomes that are no longer efficient because of a tendency toward a contract providing an equal share of maximum joint profits (Fouraker and Siegel, 1963, Fouraker et al, 1962 and Siegel and Fouraker, 1960). This literature did not intend, however, to endogenize the choice of the bargaining agenda. A more recent strand in economic theory has developed bargaining agenda games (see Fershtman, 1990). In these games the agenda may be determined endogenously for example through a prior bargaining over the agenda (Conlin and Furusawa, 2000 and Inderst, 2000). Games with endogenous agendas oppose issue-by-issue vs. bundle-bargaining (Lang and Rosenthal, 2001 and Younghwan and Serrano, 2004). These models have not been empirically tested, as far as we know. The aim of this paper is to investigate some of the reasons explaining the preference of firms for either a bundle-bargaining agenda or a restricted bargaining agenda in labor negotiations with their union by means of a controlled laboratory experiment. To do this we introduce a non-cooperative bargaining model that we test experimentally in the laboratory. In our game, firms select the bargaining agenda and bargain with unions according to one of two rules: a single-issue agenda (SIA) or a multi-issue agenda (MIA) in which two issues are negotiated simultaneously and which corresponds to the efficient bargaining model. The firm has full discretion over the agenda and the union has the whole bargaining power. The game may be seen as a non-cooperative implementation of the classical “efficient bargaining versus right-to-manage” framework. A chance move determines the profitability of the bargain for the firm. In SIA the firm may choose employment upon realization of the chance move. While this may seem advantageous, rational and risk-neutral players should still prefer MIA. By varying the probabilities of the bad state of nature in two experimental treatments, we vary the implicit cost of choosing SIA in order to investigate how agenda choice varies with this cost. The game-theoretic solution – which assumes rational and selfish behavior – states that the firm should choose the multi-issue bargaining agenda in both treatments. While the multi-issue bargaining agenda is more efficient and profitable for the firm, it also provides the firm with a lower relative share of joint profits than the single-issue agenda. Though this should not matter from a purely rational and selfish perspective, we know from the huge literature on ultimatum bargaining experiments that people have social preferences that lead them to deviate from the theoretical predictions. Our experimental results show that firms choose the single-issue bargaining agenda in 70% of the cases although employment, profit and efficiency are larger under multi-issue bargaining than under single-issue bargaining. This preference for a restricted bargaining agenda is in contrast with the theoretical prediction. The choice of bargaining agenda reacts to the fact that unions demand a larger relative payoff share in MIA than in SIA although they claim for a lower level of employment (but a higher wage) than predicted. Since at the same time unions demand lower wages than predicted in single-issue bargaining, SIA is actually more attractive to firms relative to MIA than predicted. Indeed, SIA increases significantly both the firms’ absolute payoffs and their relative share of joint payoffs and therefore, disagreement is less frequent. Eventually, the efficiency gains in MIA are smaller than theoretically predicted. Our findings support the importance of social preferences in the choice of the bargaining agenda and do not support a strong concern for efficiency. The remainder of this paper is organized as follows. Section 2 presents the theoretical model underlying the experimental design. Section 3 provides details on the experimental procedures. Section 4 reports the data and statistical analyses. Section 5 discusses the results and concludes.

To investigate the role of social preferences and efficiency concerns in labor negotiations, we have experimentally tested a non-cooperative game in which firms are allowed to choose the bargaining agenda and that reproduces the efficiency gains associated with a multi-issue bargaining agenda (MIA) compared with a single-issue agenda (SIA). Our results are striking: although our model predicts that firms should prefer the multi-issue bargaining agenda, 70% of the firms choose the single-issue agenda. As predicted by our model, employment and thus efficiency are larger under MIA than under SIA. Indeed, with multi-issue bargaining unions accept to lower wages in order to increase the employment level in comparison with single-issue bargaining. In the experiment however, the efficiency gains and the level of employment under MIA are significantly lower than theory predicts. The unions claim for lower employment and higher wage in MIA and lower wage in SIA than predicted, probably because, like in ultimatum bargaining experiments, they fear a rejection of their proposal. If firms deviate from the subgame perfect equilibrium, it is because MIA is actually less attractive relative to SIA than predicted. The bargaining agenda does not determine directly the probability of an agreement, but the higher the expected absolute payoff and the higher the expected firm’s relative share, the more likely is an agreement. We find that, compared with MIA, SIA increases significantly both the firms’ absolute payoffs and relative share of joint payoffs. Indeed, the unions make less selfish claims than predicted and firms do care about their relative payoffs. These results can be partly explained by the importance of social preferences and a concern for relative and not only absolute payoffs. This is consistent with models of inequality aversion such as Fehr and Schmidt (1999). Our findings also reveal a lack of concern for efficiency since joint payoffs are higher under MIA than SIA, as predicted; this is not in line with the model of social preferences proposed by Charness and Rabin (2002). Of course, if firms are strongly risk averse they might prefer SIA as well. We did not elicit our subjects’ risk attitude but yet, we find that decisions are not affected by the subjects’ gender that is a correlate of risk attitude. We acknowledge that a definitive conclusion on this issue would need further exploration but this can be taken as a preliminary indication that risk aversion is not a major driver of the choice of SIA. In sum, although one must be cautious before extrapolating experimental results to real work setting, our findings give clear indication that both rational and behavioral considerations drive the choice of the bargaining agenda and the determination of employment levels. This concern of firms for absolute and relative payoffs does not exclude other potential behavioral explanations of the preference for single-issue bargaining. In particular, we speculate that the preference for a single-issue bargaining agenda may be associated with a preference for a larger freedom of choice. If, ceteris paribus, some people value having a larger choice space rather than a smaller one, they should naturally choose more frequently the single-issue bargaining. This idea can be related to reactance theory in social psychology according to which individuals attach positive value to the freedom of choice and strive to maintain this freedom ( Brehm, 1966 and Curhan et al., 2006). In economics, the intrinsic value of the freedom of choice has notably been explored by Sen, 1988 and Puppe, 1996, and more recently in experiments by Falk and Kosfeld (2008). Therefore, a natural extension of our work would be to identify how the value of freedom of choice interacts with concerns for relative payoffs when they are not aligned. Another direction would be to allow the players to bargain over the bargaining agenda itself before negotiating on wage only or wage and employment. It would allow us to see notably how it affects the way unions take into account the trade-off between several goals in negotiations. Another interesting extension of our paper would be to study to which extent union claims are affected by an endogenous bargaining agenda in comparison with an exogenous agenda.