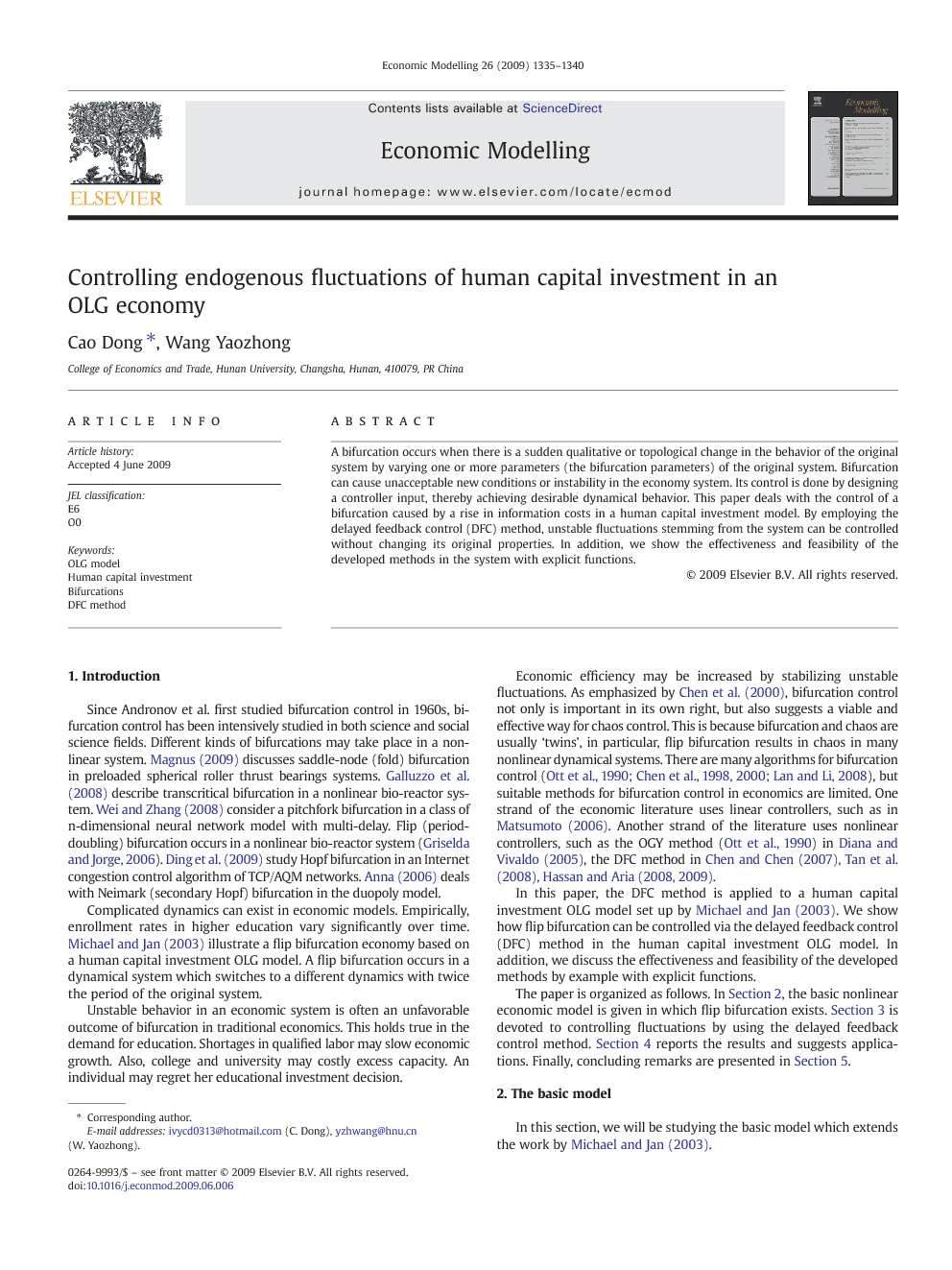 A bifurcation occurs when there is a sudden qualitative or topological change in the behavior of the original system by varying one or more parameters (the bifurcation parameters) of the original system. Bifurcation can cause unacceptable new conditions or instability in the economy system. Its control is done by designing a controller input, thereby achieving desirable dynamical behavior. This paper deals with the control of a bifurcation caused by a rise in information costs in a human capital investment model. By employing the delayed feedback control (DFC) method, unstable fluctuations stemming from the system can be controlled without changing its original properties. In addition, we show the effectiveness and feasibility of the developed methods in the system with explicit functions.

Since Andronov et al. first studied bifurcation control in 1960s, bifurcation control has been intensively studied in both science and social science fields. Different kinds of bifurcations may take place in a nonlinear system. Magnus (2009) discusses saddle-node (fold) bifurcation in preloaded spherical roller thrust bearings systems. Galluzzo et al. (2008) describe transcritical bifurcation in a nonlinear bio-reactor system. Wei and Zhang (2008) consider a pitchfork bifurcation in a class of n-dimensional neural network model with multi-delay. Flip (period-doubling) bifurcation occurs in a nonlinear bio-reactor system (Griselda and Jorge, 2006). Ding et al. (2009) study Hopf bifurcation in an Internet congestion control algorithm of TCP/AQM networks. Anna (2006) deals with Neimark (secondary Hopf) bifurcation in the duopoly model. Complicated dynamics can exist in economic models. Empirically, enrollment rates in higher education vary significantly over time. Michael and Jan (2003) illustrate a flip bifurcation economy based on a human capital investment OLG model. A flip bifurcation occurs in a dynamical system which switches to a different dynamics with twice the period of the original system. Unstable behavior in an economic system is often an unfavorable outcome of bifurcation in traditional economics. This holds true in the demand for education. Shortages in qualified labor may slow economic growth. Also, college and university may costly excess capacity. An individual may regret her educational investment decision. Economic efficiency may be increased by stabilizing unstable fluctuations. As emphasized by Chen et al. (2000), bifurcation control not only is important in its own right, but also suggests a viable and effective way for chaos control. This is because bifurcation and chaos are usually ‘twins’, in particular, flip bifurcation results in chaos in many nonlinear dynamical systems. There are many algorithms for bifurcation control (Ott et al., 1990, Chen et al., 1998, Chen et al., 2000 and Lan and Li, 2008), but suitable methods for bifurcation control in economics are limited. One strand of the economic literature uses linear controllers, such as in Matsumoto (2006). Another strand of the literature uses nonlinear controllers, such as the OGY method (Ott et al., 1990) in Diana and Vivaldo (2005), the DFC method in Chen and Chen, 2007, Tan et al., 2008, Hassan and Aria, 2008 and Hassan and Aria, 2009. In this paper, the DFC method is applied to a human capital investment OLG model set up by Michael and Jan (2003). We show how flip bifurcation can be controlled via the delayed feedback control (DFC) method in the human capital investment OLG model. In addition, we discuss the effectiveness and feasibility of the developed methods by example with explicit functions. The paper is organized as follows. In Section 2, the basic nonlinear economic model is given in which flip bifurcation exists. Section 3 is devoted to controlling fluctuations by using the delayed feedback control method. Section 4 reports the results and suggests applications. Finally, concluding remarks are presented in Section 5.

In this paper, we give a logical and mathematical methodology to control endogenous fluctuation of human capital investment in an OLG model defined by Michael and Jan (2003). We consider the corresponding control models based on the DFC method. Unstable fluctuation of the system can be suppressed and do not require the exact knowledge of the system. The DFC methodology could be interpreted as government policy instruments that can be used to control endogenous fluctuations. Sargent and Wallace (1976) demonstrate a policy ineffectiveness proposition, where rational agents know the model and the control feedback in a monetary context, so that monetary policy is ineffective. Agents can foresee the government policy effect, and wage and price expectations will be revised accordingly. By contrast, our agents are heterogeneous in their expectations on the return to education. There are a fraction of agents making naive predictions. Access to information is costly. So agents do not know how the economy runs. Thus, the government is able to manipulate the economy.