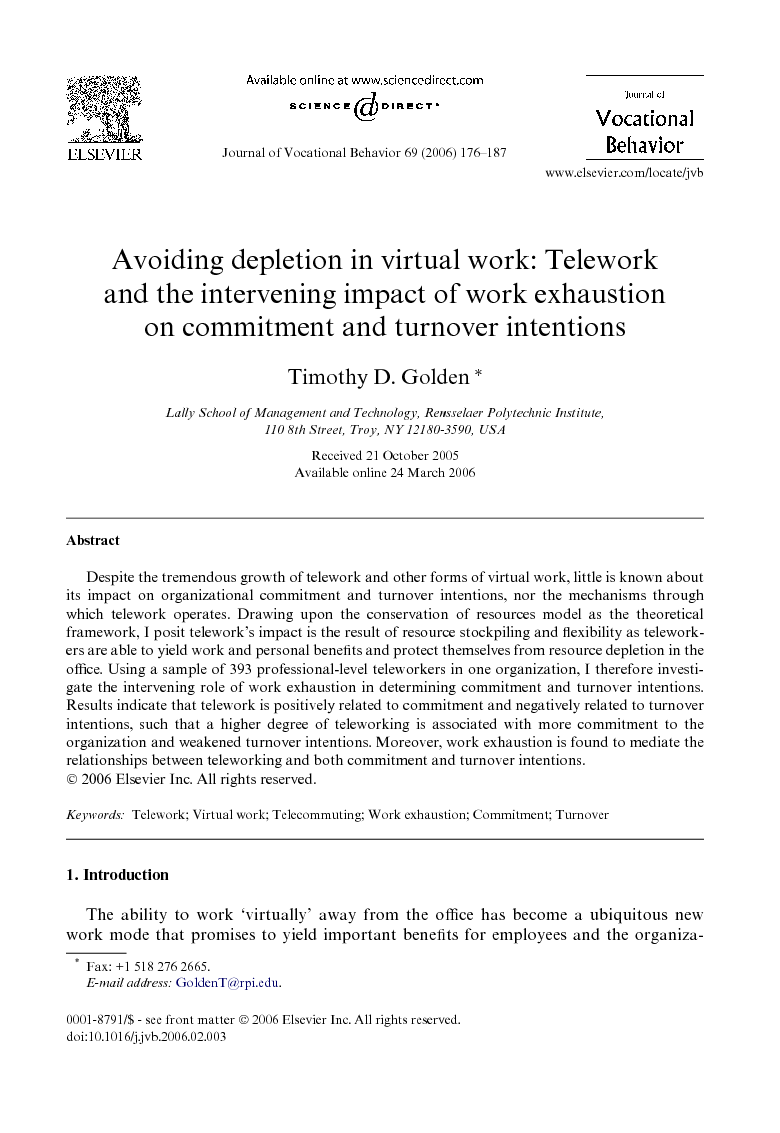 The ability to work ‘virtually’ away from the office has become a ubiquitous new work mode that promises to yield important benefits for employees and the organization. Teleworking, as a form of virtual work, can involve working in multiple satellite offices or other remote locations away from the company office, though most commonly teleworkers allocate their work time between an office and home (Bailey & Kurland, 2002). With at least 37% of companies offering telework arrangements, increasing at 11% per year (SHRM, 2001), teleworking is becoming a highly popular way for professionals to ease ever-increasing work demands yet still fulfill personal and family needs (Rau and Hyland, 2002 and Stephens and Szajna, 1998). Moreover, the widespread assumption that employees who telework are more committed to the organization and less likely to leave it often provides the rationale for organizations implementing telework programs (Guimaraes & Dallow, 1999). To date, however, researchers understand little about this work arrangement, particularly its impact on fundamental outcomes such as organizational commitment and turnover intentions (Bailey and Kurland, 2002 and Pinsonneault and Boisvert, 2001). A growing body of research, although focusing exclusively on traditional work modes rather than telework, has recently investigated work exhaustion as a possible antecedent to commitment and turnover intentions (Moore, 2000a and Moore, 2000b). Exhaustion research suggests that individuals are more vulnerable if exposed to continuous face-to-face contact with co-workers and others in their work (Cordes and Dougherty, 1993 and Leiter and Maslach, 1988). Since teleworking involves separation from others and greater discretion over when and how to interact via electronic media (Wiesenfeld, Raghuram, & Garud, 1999), it is likely to affect the nature and intensity of interactions and off-set exhaustion emanating from continuous face-to-face contact. Moreover, by avoiding a commute, telework aids the acquisition of additional time to spend fulfilling family and work demands (Guimaraes & Dallow, 1999), thereby conserving emotional and mental energy. Work exhaustion may therefore represent an important explanatory variable to help understand the impact of telework on work outcomes, and shed insights to fill the void in current literature (e.g., Bailey and Kurland, 2002 and Feldman and Gainey, 1997). In this study, I therefore investigate the link between telework and organizational commitment and turnover intentions, and focus on how work exhaustion altered by teleworking acts as an intervening factor. Because teleworkers vary in the degree to which they work away from the office (Baruch, 2001 and Cummings, 2005), and since researchers have generally only compared teleworkers to non-teleworkers (e.g., Bailey and Kurland, 2002 and Igbaria and Guimaraes, 1999), I reason that changes in commitment and turnover and the intervening impact of work exhaustion are the result of the degree to which employees telework. Drawing on the conservation of resources (COR) model of stress (Hobfoll, 1988 and Hobfoll, 1989) and the literature on work exhaustion and burnout (e.g., Cordes and Dougherty, 1993, Moore, 2000a and Moore, 2000b), I suggest that telework’s impact may be the result of resource ‘stockpiling’ and flexibility as teleworkers are able to yield benefits and protect themselves from resource depletion in the office.