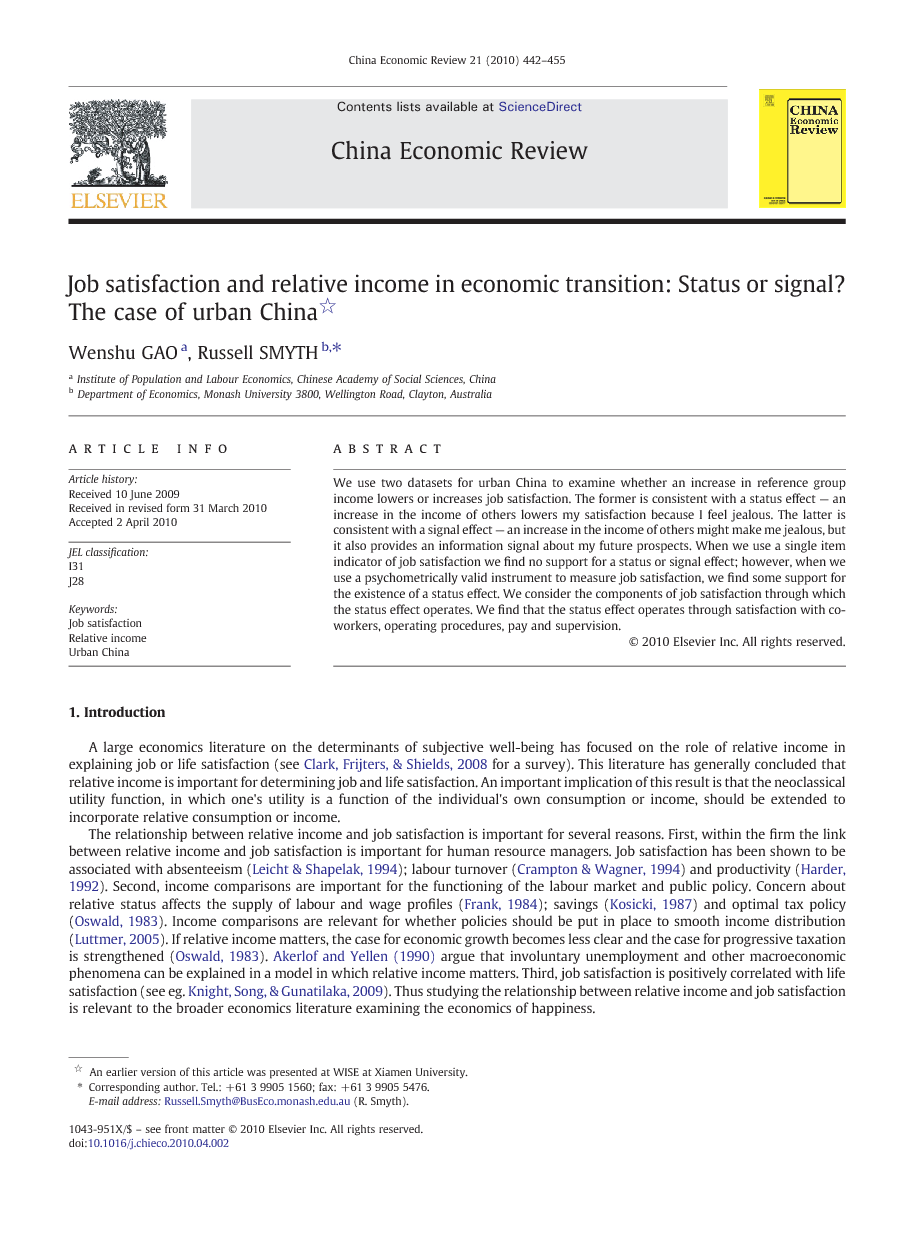 China's market reforms have resulted in a substantial improvement in the living standards of most of the urban population. However, at the same time they have also generated marked increases in income inequality. And while many have benefited from the marketization process there are also those who have been left behind, who have become increasingly vocal in criticizing rising income inequality and reminding the state of its socialist claim to legitimacy and of promises of egalitarianism made during the Maoist past. The findings reported here are evidence that China's urban population are concerned about rising income inequality and that the signalling effect of higher wages has not been sufficient to outweigh the status effect of relative deprivation with rising reference group income. One of the contributions of this study has been to highlight the need to examine the effects of changes in reference group income on different components of job satisfaction, using a psychometrically valid instrument. The results suggest that the status effect operates through some components of job satisfaction associated with a more competitive work environment, but not others. A potential limitation of this study is that we do not control for personality traits. One approach to controlling for personality traits has been to use panel data, which we do not have. The other approach has been to control for personality traits by including variables to measure attitudes on social issues (Smyth, Mishra, & Qian, 2008), mood (Knight et al., 2009) or mental health indicators (Ferrer-i-Carbonell & Gowdy, 2007). However, none of these variables accurately depict personality traits as they are conceptualized in the psychology literature. Future research should control for stable aspects of the personality, such as the locus of control and dispositional optimism. Locus of control, defined by Rotter (1966) as a person's perception of their control over event outcomes, has been found to impact on personal well-being in a range of cultural contexts (see eg., Garcia et al., 2002, Kulshrestha and Sen, 2006 and Spector et al., 2001). Dispositional optimism, defined by Scheier and Carver (1985) as the propensity to generally expect favourable outcomes over unfavourable ones, has also been demonstrated to co-vary with perceived well-being (see eg., Isaacowitz, 2004). We would encourage future studies to use psychometrically valid and reliable measures of these psychological constructs which capture the complex conceptualisation of these variables. Clark et al. (2009) emphasise the composition of the reference group and that finding a signal effect is more likely if the reference group is work colleagues than neighbours. A possible reason why we fail to find a signal effect is that our Shanghai sample with which we investigated the effect of establishment earnings on job satisfaction was too small. A useful avenue for future research would be to combine the use of the JSS (or some other psychometrically valid instrument to measure JSS) with matched employee–employer data for a large sample, in order to combine the advantages of both datasets employed here.