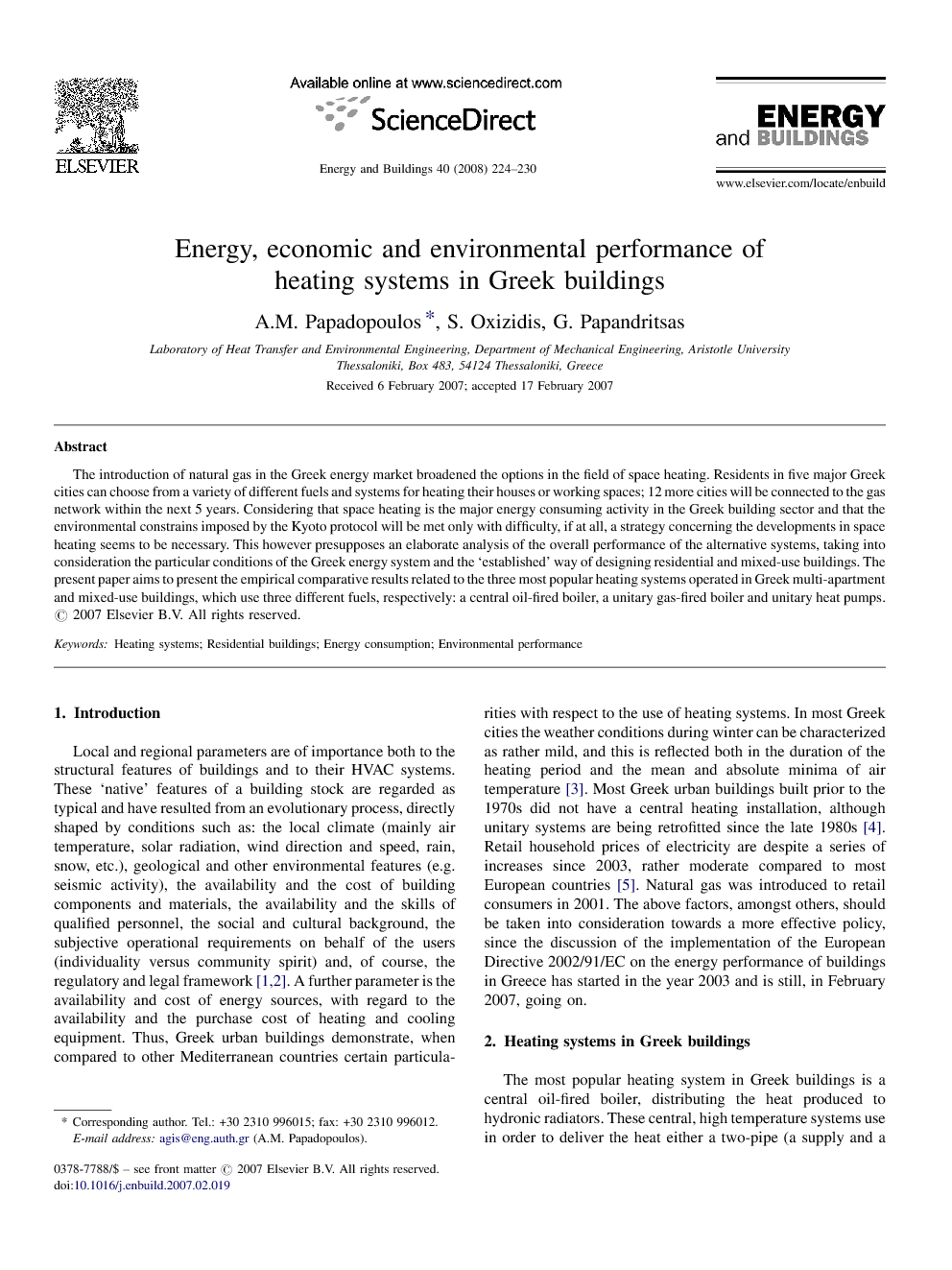 The introduction of natural gas in the Greek energy market broadened the options in the field of space heating. Residents in five major Greek cities can choose from a variety of different fuels and systems for heating their houses or working spaces; 12 more cities will be connected to the gas network within the next 5 years. Considering that space heating is the major energy consuming activity in the Greek building sector and that the environmental constrains imposed by the Kyoto protocol will be met only with difficulty, if at all, a strategy concerning the developments in space heating seems to be necessary. This however presupposes an elaborate analysis of the overall performance of the alternative systems, taking into consideration the particular conditions of the Greek energy system and the ‘established’ way of designing residential and mixed-use buildings. The present paper aims to present the empirical comparative results related to the three most popular heating systems operated in Greek multi-apartment and mixed-use buildings, which use three different fuels, respectively: a central oil-fired boiler, a unitary gas-fired boiler and unitary heat pumps.

Local and regional parameters are of importance both to the structural features of buildings and to their HVAC systems. These ‘native’ features of a building stock are regarded as typical and have resulted from an evolutionary process, directly shaped by conditions such as: the local climate (mainly air temperature, solar radiation, wind direction and speed, rain, snow, etc.), geological and other environmental features (e.g. seismic activity), the availability and the cost of building components and materials, the availability and the skills of qualified personnel, the social and cultural background, the subjective operational requirements on behalf of the users (individuality versus community spirit) and, of course, the regulatory and legal framework [1] and [2]. A further parameter is the availability and cost of energy sources, with regard to the availability and the purchase cost of heating and cooling equipment. Thus, Greek urban buildings demonstrate, when compared to other Mediterranean countries certain particularities with respect to the use of heating systems. In most Greek cities the weather conditions during winter can be characterized as rather mild, and this is reflected both in the duration of the heating period and the mean and absolute minima of air temperature [3]. Most Greek urban buildings built prior to the 1970s did not have a central heating installation, although unitary systems are being retrofitted since the late 1980s [4]. Retail household prices of electricity are despite a series of increases since 2003, rather moderate compared to most European countries [5]. Natural gas was introduced to retail consumers in 2001. The above factors, amongst others, should be taken into consideration towards a more effective policy, since the discussion of the implementation of the European Directive 2002/91/EC on the energy performance of buildings in Greece has started in the year 2003 and is still, in February 2007, going on.

Table 10 presents the final energy consumption values for the two thermal insulation cases and all the possible systems and fuels for both major cities, Athens (zone B) and Thessaloniki (zone C). The respective resulting energy costs are depicted in Fig. 2. As can be observed, the electrical heating (system C) is the most expensive one. Still, in cases of low heating loads (due to insulation and milder climatic conditions that favor the use of heat pumps) its operational cost is comparable to that of the oil-fired central heating boiler. As was expected, the cheaper system is the gas-fired one (for both space heating and hot water provision), a fact that explains its rapid penetration in the cities where it is available. Fig. 3 presents the fuels’ cost, coupled with the respective primary energy consumption of each system. However, it should be mentioned that part of the high primary energy consumption of system C is due to the very low efficiency of the Greek electricity generation system which is lignite based.The primary energy consumption largely determines the emissions produced by every system, as shown in Table 11. However, taking into consideration that the location and nature of the emitted gases significantly differ, a direct comparison is not always feasible or indeed meaningful. One needs to bear in mind that in the case of oil-fired central boiler systems fuel gases are exhausted some meters above the roof of the building, whilst in the case of the unitary natural gas-fired boilers this takes place directly in the street canyon at the height of each apartment. Furthermore, the emissions resulting from electricity consumption pollute the area where the generation plants are located. Such differentiations, though insignificant on a national level, should be of interest when focusing on a micro-scale level, especially with respect to the street canyon effect [21].Considering the environmental restrictions in force in Greece it is not easy to conclude which is the best system. Thessaloniki and Athens rank amongst the most highly polluted European cities, and the same goes for the region in north-western Greece, where the lignite-fired power plants are located. Thus, to re-locate the pollution sources due to space heating of urban buildings cannot be considered only with respect to minimizing emissions in absolute terms; one has also to think of their spatial allocation. A special issue, to which has already been referred, arises due to the methodology used when billing the apartments for their heating costs. Fig. 4 depicts the annual heating costs for two selected apartments: one is a second storey eastern apartment of the insulated building in Athens and the other is a western apartment on the first floor – above the pilotis – of the non-insulated building in Thessaloniki. In the case of central heating system there are the aforementioned three ways to measure the heating consumption in every apartment (no meters A1, time meters A2 and heat meters A3) and thus, to allocate the corresponding costs. It is of great interest to notice, that the lower the heating load of an apartment is, the higher – proportionally to the other apartments – its heating costs develop. Especially in the case of the insulated second floor apartment in Athens the electrically driven system is cheaper than the central oil-fired system in all cases, except when using heat meters. On the other hand in the non-insulated apartment of the first floor in Thessaloniki, the use of meters results in an increase of its heating costs. In addition, the electric system which is the most autonomous out of the three considered, leads by far to the highest costs; a result which is, from an energy economics’ point of view, rather irrational.The overall conclusion is that the use of meters results in financial savings only in the case of apartments which present low heating loads (intermediate floors) and adds heating cost in the case of apartments with high load (last and first floors). Still, and given the legislation in force, even with heat metering the cost distribution is unfair to the occupants of apartments on intermediate floors. However, despite the metering related issues, the unitary gas-fired boiler appears to be the most economic solution, though the actual savings compared to central systems can vary significantly, as can be seen in Fig. 4. This has been recognized by the market, leading to a demand for new installations, both in newly constructed and existing buildings, which in some cases exceeds the pace of the networks’ expansion. According to the last census of 2001 there were 1,950,000 households in Athens and Thessaloniki [4]. In the area of Thessaloniki more than 320,000, or 42% of households, have switched to gas between 2001 and 2006, whilst the aim for 2011 is to achieve a propagation of 85% [17]. In Athens, however, the respective figure for 2006 was 110,000 households, or less than 8%, due to delays in the network's expansion, leading to some tens of thousands of contracts still pending [22].