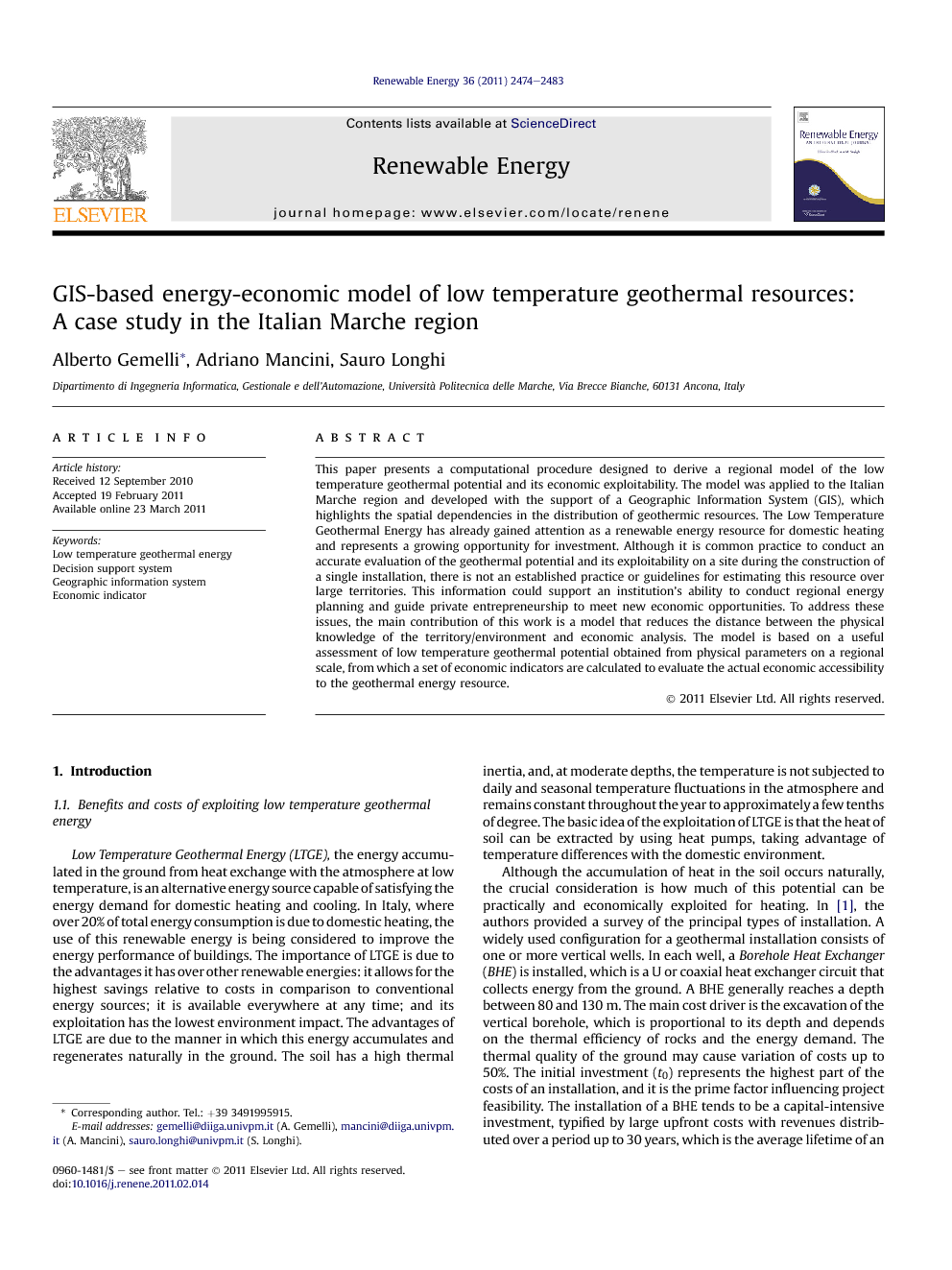 This paper presents a computational procedure designed to derive a regional model of the low temperature geothermal potential and its economic exploitability. The model was applied to the Italian Marche region and developed with the support of a Geographic Information System (GIS), which highlights the spatial dependencies in the distribution of geothermic resources. The Low Temperature Geothermal Energy has already gained attention as a renewable energy resource for domestic heating and represents a growing opportunity for investment. Although it is common practice to conduct an accurate evaluation of the geothermal potential and its exploitability on a site during the construction of a single installation, there is not an established practice or guidelines for estimating this resource over large territories. This information could support an institution’s ability to conduct regional energy planning and guide private entrepreneurship to meet new economic opportunities. To address these issues, the main contribution of this work is a model that reduces the distance between the physical knowledge of the territory/environment and economic analysis. The model is based on a useful assessment of low temperature geothermal potential obtained from physical parameters on a regional scale, from which a set of economic indicators are calculated to evaluate the actual economic accessibility to the geothermal energy resource.

In this work, it was presented a GIS-based energetic–economic model of low temperature geothermal energy (LTGE) applied to the Italian Marche region. The model represents a passive decision support tool to plan the exploitation of LTGE. The work is innovative in unifying physical and economic variables for this appliance on a spatial scale strategic for an economic analysis. The model includes thematic maps of key economic indicators. The model is also designed to support decision making for households, public administrations and venture capitalists operating in the field of geothermal energy for house heating. In designing this model, it has been taken into account its responsiveness to current economic trends and administrative guidelines. Relevant aspects are highlighted in the case study of the Marche region. The overall picture indicates that this regional territory can be separated into sub-regions for the LTGE potential, which depend primarily on the quality of the geological properties of the site. Within the sub-regions, the economic attractiveness of LTGE is spatially more articulated because it depends not only on the cost of the installation but also on other local economic factors that affect the per capita income. The economic attractiveness of the installation together with the market size offer a picture of the return of investment for the entrepreneurs and ESCO providing energy services. Finally, the financial performance of RECs is determined primarily by the thermal properties of the ground. The methodology proposed here is not tailored to a specific region and can easily be extended to other territories.