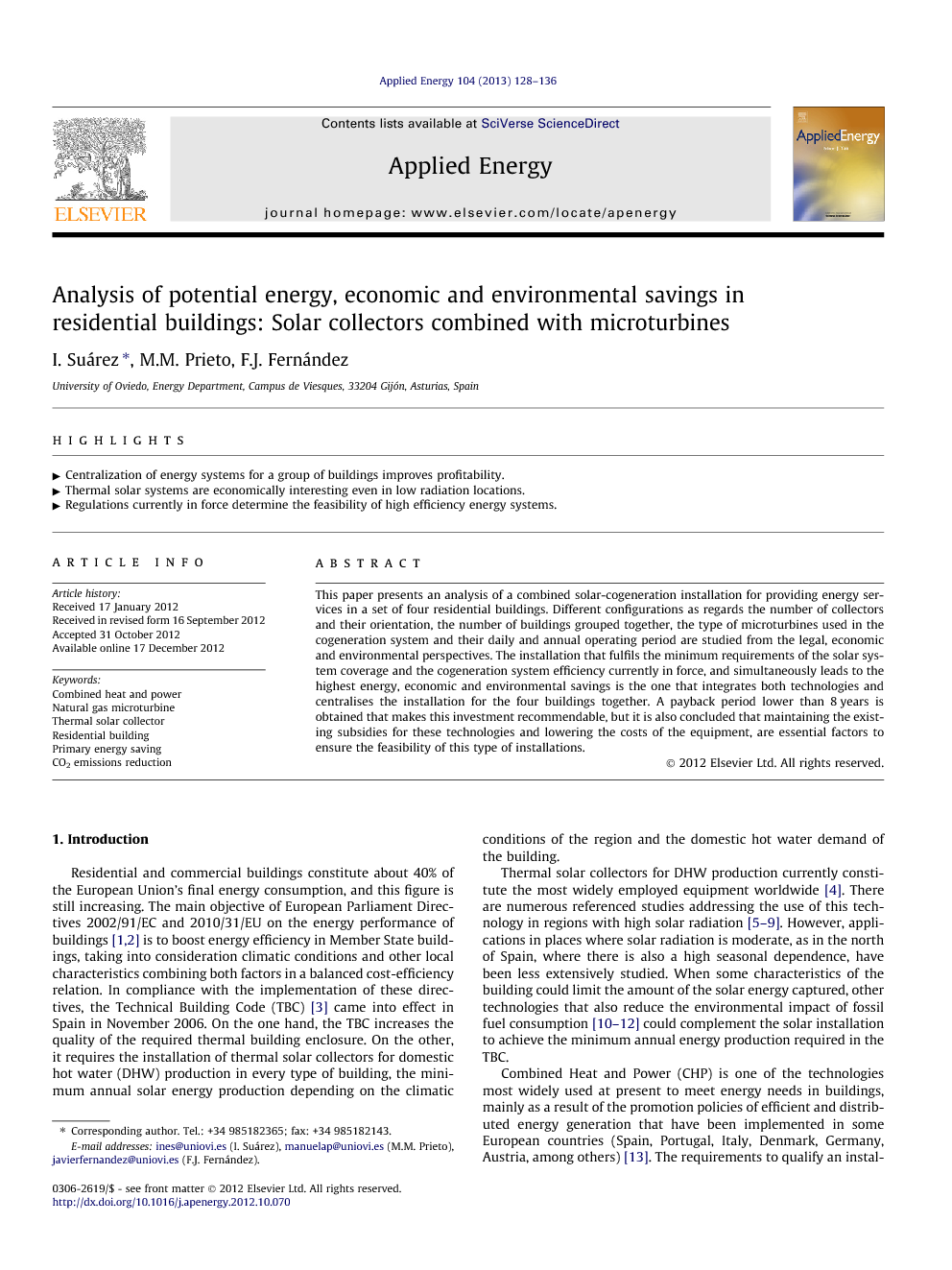 This paper presents an analysis of a combined solar-cogeneration installation for providing energy services in a set of four residential buildings. Different configurations as regards the number of collectors and their orientation, the number of buildings grouped together, the type of microturbines used in the cogeneration system and their daily and annual operating period are studied from the legal, economic and environmental perspectives. The installation that fulfils the minimum requirements of the solar system coverage and the cogeneration system efficiency currently in force, and simultaneously leads to the highest energy, economic and environmental savings is the one that integrates both technologies and centralises the installation for the four buildings together. A payback period lower than 8 years is obtained that makes this investment recommendable, but it is also concluded that maintaining the existing subsidies for these technologies and lowering the costs of the equipment, are essential factors to ensure the feasibility of this type of installations.

Residential and commercial buildings constitute about 40% of the European Union’s final energy consumption, and this figure is still increasing. The main objective of European Parliament Directives 2002/91/EC and 2010/31/EU on the energy performance of buildings [1] and [2] is to boost energy efficiency in Member State buildings, taking into consideration climatic conditions and other local characteristics combining both factors in a balanced cost-efficiency relation. In compliance with the implementation of these directives, the Technical Building Code (TBC) [3] came into effect in Spain in November 2006. On the one hand, the TBC increases the quality of the required thermal building enclosure. On the other, it requires the installation of thermal solar collectors for domestic hot water (DHW) production in every type of building, the minimum annual solar energy production depending on the climatic conditions of the region and the domestic hot water demand of the building. Thermal solar collectors for DHW production currently constitute the most widely employed equipment worldwide [4]. There are numerous referenced studies addressing the use of this technology in regions with high solar radiation [5], [6], [7], [8] and [9]. However, applications in places where solar radiation is moderate, as in the north of Spain, where there is also a high seasonal dependence, have been less extensively studied. When some characteristics of the building could limit the amount of the solar energy captured, other technologies that also reduce the environmental impact of fossil fuel consumption [10], [11] and [12] could complement the solar installation to achieve the minimum annual energy production required in the TBC. Combined Heat and Power (CHP) is one of the technologies most widely used at present to meet energy needs in buildings, mainly as a result of the promotion policies of efficient and distributed energy generation that have been implemented in some European countries (Spain, Portugal, Italy, Denmark, Germany, Austria, among others) [13]. The requirements to qualify an installation for this special regimen vary depending on the country, but they are in general related to the installed capacity (micro-scale and small-scale units are usually favoured) and the efficiency of the plant. The interest in micro-scale and small-scale cogeneration units has resulted in the development of new technologies such as small gas engines, micro-gas turbines, Stirling engines, fuel cells and organic Rankine cycles. Among them, the use of micro-gas turbines as primary movers in cogeneration plants is now increasing, not only in industry, but also in the building sector [14], [15], [16], [17] and [18]. The characteristics of reduced power and low noise levels of commercial units make them more suitable than other thermal motors for their application in all kinds of buildings [19], [20], [21], [22], [23], [24] and [25]. The objective of the present paper is the design of an installation for covering the energy needs of a set of four residential buildings that fulfils the requirements of the Spanish legal framework affecting the technologies used. The buildings are located on the northern coast of Spain, a region that is noted for receiving substantially lower solar radiation than the average value of the country. Additionally, other factors related to the location of the buildings in the centre of a city contribute to reducing the available solar radiation: limited space for installing solar collectors, shadows from neighbouring buildings and orientation determined by the urban layout. For this reason, the installation combines thermal solar collectors for producing domestic hot water (mandatory in the TBC) and micro-gas turbines for combined heating and electricity to be sold to the grid. As the optimal design of installations based on renewable or high efficiency technologies is largely influenced by the legal framework and economic aspects are also involved, different configurations of both systems (solar and cogeneration) are analysed, calculating for each of them different indexes of energy efficiency, economic profit and environmental savings.

In this paper, an installation has been designed to cover the thermal demand of a set of four residential buildings located in a city on the northern coast of Spain. The installation combines a solar system for the production of domestic hot water and a cogeneration system with natural gas microturbines that enables electricity to be sold to the grid and provides the annual heating demand of the buildings. The design of the systems was based on the measured data of the fuel consumptions of the buildings over a period of 1 year. The designed configuration of the solar system obtains the maximum value of the average annual solar coverage of the domestic hot water design of the four buildings, making the best use of the space available on their flat roof. The results show that even in locations with low solar radiation, in buildings with limited surface for capturing solar energy and in buildings in city centres whose orientation is determined by the urban layout, the designed solar system can provide nearly 60% of the annual thermal demand for domestic hot water. This value significantly exceeds the minimum value established in the Spanish regulations currently in force (30%) and demonstrates that thermal solar collectors are interesting from an economic point of view, as a payback period of 9.4 years was obtained. As regards the sizing of the cogeneration system, efficiency and economic aspects were considered. Different configurations in terms of the way in which buildings are grouped, the type of microturbines used and their daily operating period were analysed. The results show that the use of natural microturbines for combined heating and electricity production is a highly recommendable option in terms of technical aspects because the equivalent electrical efficiency is greater than 70% in most of the analysed configurations. This value significantly exceeds the minimum value established in the Spanish regulations currently in force (53.1%) to obtain an authorised installation permit to sell electricity to the grid. Furthermore, the cogeneration system leads to a primary energy saving of 26% with respect to the conventional heating system. This value not only allows its classification as a high efficiency installation, but also enables it to receive an economic grant related to efficiency savings that contributes, among other factors, to reducing the payback of the investment. The simultaneous integration of both technologies, solar and cogeneration, and the centralising of the installation for the four buildings improve the profitability of the investment and reduce the environmental impact compared to the results obtained considering the technologies and the buildings separately. The best option from the economic and environmental points of view is the one that completely replaces the existing boilers and increases the annual operating period of the cogeneration system by providing also the auxiliary energy to the solar system throughout the year. A payback period lower than 8 years and more than 540 tons of CO2 emissions to the atmosphere saved per year in this case, lead to an interesting investment. Other buildings with cooling thermal demands during the summer could allow higher annual operating periods of the cogeneration system, thereby improving the efficiency parameters and the environmental savings. Unfortunately, the subsidies for these technologies and the investment costs of equipment are essential to ensure the economic feasibility of the installations due to the appreciable influence of the income from the sale of electricity to the grid and the solar system subsidy on the payback of the resulting investment.