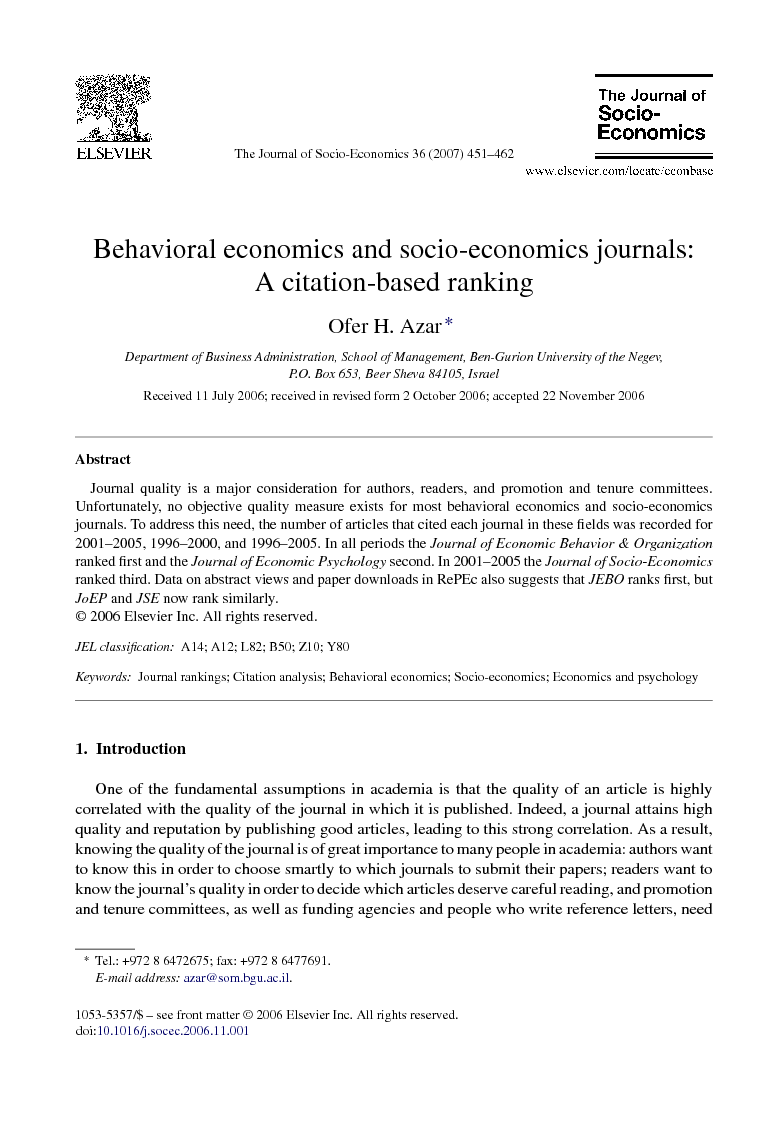 Journal quality is a major consideration for authors, readers, and promotion and tenure committees. Unfortunately, no objective quality measure exists for most behavioral economics and socio-economics journals. To address this need, the number of articles that cited each journal in these fields was recorded for 2001–2005, 1996–2000, and 1996–2005. In all periods the Journal of Economic Behavior & Organization ranked first and the Journal of Economic Psychology second. In 2001–2005 the Journal of Socio-Economics ranked third. Data on abstract views and paper downloads in RePEc also suggests that JEBO ranks first, but JoEP and JSE now rank similarly.

One of the fundamental assumptions in academia is that the quality of an article is highly correlated with the quality of the journal in which it is published. Indeed, a journal attains high quality and reputation by publishing good articles, leading to this strong correlation. As a result, knowing the quality of the journal is of great importance to many people in academia: authors want to know this in order to choose smartly to which journals to submit their papers; readers want to know the journal's quality in order to decide which articles deserve careful reading, and promotion and tenure committees, as well as funding agencies and people who write reference letters, need to know the journal's quality in order to assess correctly the qualifications of a candidate for promotion, tenure, or a grant. Journal quality is also the basis for many rankings of universities and departments; in order to estimate the academic value of each publication generated by the department's faculty, for example, the quality of the journal in which the article was published has to be taken into account (see for example Coupe, 2003 and Lubrano et al., 2003). The most prevalent method to assess the quality of journals is based on the number of citations they receive.1 When an article is cited, it usually suggests that it contributed significantly to the literature on which the citing article builds, and so the number of citations that an article receives is a commonly used indication of its quality. When we add up the number of citations that all the articles published by a certain journal received, we therefore obtain a measure of journal quality. The importance of citations in indicating journal quality led to the creation of various databases that record citations in academic journals. ISI Web of Knowledge (henceforth ISI) and its “Web of Science” database, for example, track continuously thousands of journals in various disciplines and record all the citations that appeared in them.2 Based on this database, ISI also publishes its “Journal Citation Reports” (henceforth JCR) that reports the total number of citations that a journal received in a given year from all other journals in the database, as well as some additional measures of journal performance. The great importance of assessing journal quality resulted in various rankings of academic journals. In economics, for example, some prominent examples include the rankings by Liebowitz and Palmer (1984), Laband and Piette (1994), and Kalaitzidakis et al. (2003). Additional economics journal rankings include Barrett et al. (2000), who created rankings by sub-discipline (according to JEL codes),3 the perception-based ranking by Axarloglou and Theoharakis (2003), and the ranking based on citations in textbooks by Liner (2002). In principle, one can learn from a general ranking also about the relative position of journals in a certain sub-field. In practice, however, these general rankings often do not include enough of the sub-field journals to provide meaningful information for people interested in that specific sub-field. As a result, rankings of journals in a specific sub-field are sometimes published to address this need, for example the agricultural economics ranking by Burton and Phimister (1996), the applied econometrics ranking by Baltagi (1999), and the international business ranking by Dubois and Reeb (2000). Unfortunately, in behavioral economics and socio-economics the vast majority of journals are not included in published rankings of economics journals or in the JCR data, and yet no journal ranking for these fields was published yet. Consequently, there is no objective measure of journal quality for most journals in these fields. This article addresses this need by providing such a ranking. Behavioral economics encompasses these areas that are related to both economics and psychology, for example the effect of psychological motivations on economic decision-making and consequently also on firms and markets. Socio-economics includes areas that are related to both economics and sociology, for example the influence of social norms on economic behavior. It makes sense to include both behavioral economics and socio-economics journals in the same ranking because the overlap between these two fields is large. The effect of social norms on economic behavior, for example, is often related also to psychological motivations and to social psychology.4 This large overlap between behavioral economics and socio-economics is also reflected in the relevant journals: many journals publish research in both areas. The rest of the article proceeds as follows. The next section discusses some general methodological issues in ranking journals and explains how the ranking was created. Section 3 presents the results of the citation-based ranking and also compares the data for the ranked journals to data computed for journals in other relevant fields. Section 4 examines data about paper downloads and abstract views in RePEc and compares the results to the citation-based ranking. The last section concludes.

This article reports for the first time a ranking of journals in the fields of behavioral economics and socio-economics. This is an important endeavor because it gives valuable information to people who want to evaluate the quality of different journals in this combined area, such as authors, readers, and members of promotion and tenure committees. Based on citation analysis in the most recent period (2001–2005), JEBO ranks first, JoEP second, and JSE third. Based on online attention measures – the number of abstract views and paper downloads in RePEc – JEBO still ranks first, but now there is no significant distinction between JoEP and JSE; JSE is slightly higher than JoEP in abstract views, and JoEP is slightly higher than JSE in paper downloads.