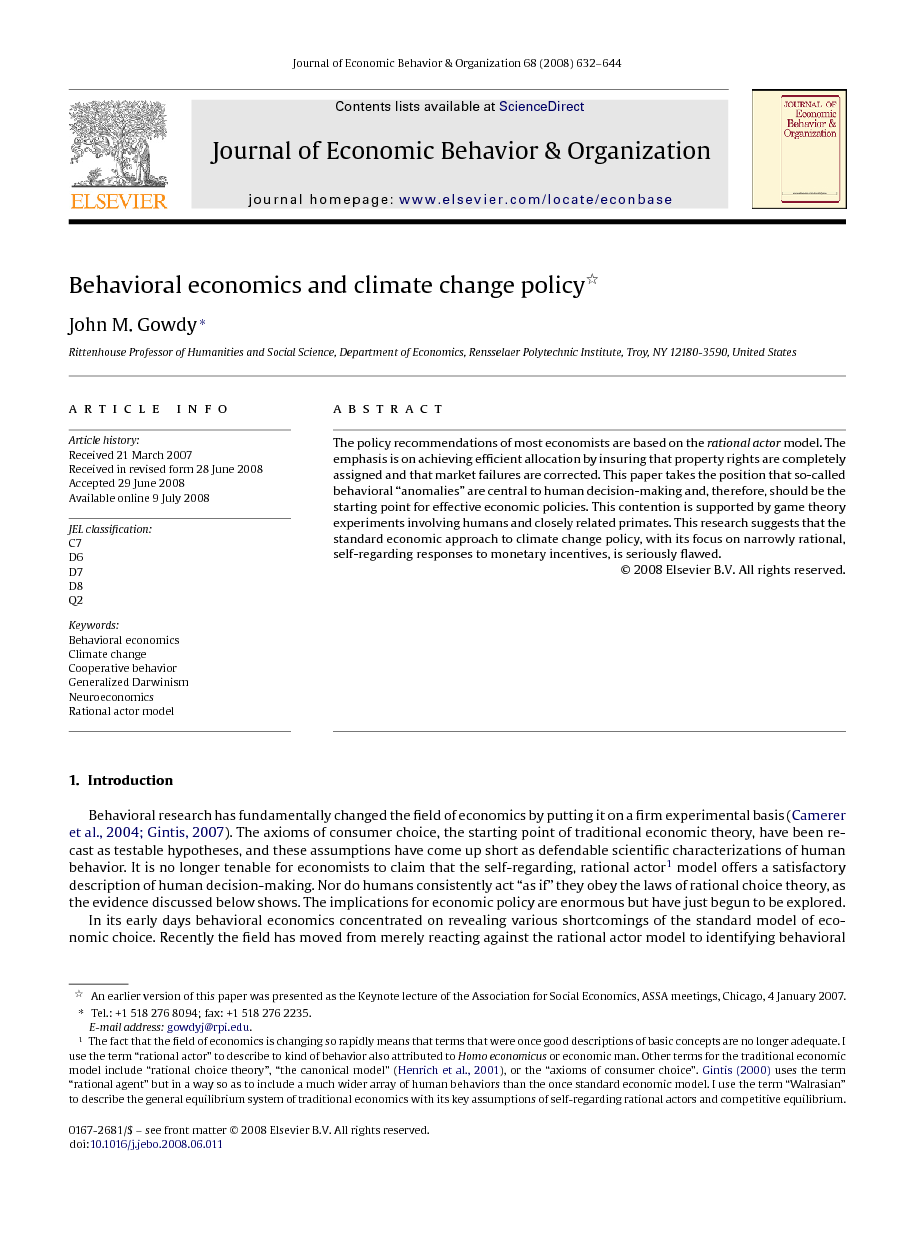 The policy recommendations of most economists are based on the rational actor model. The emphasis is on achieving efficient allocation by insuring that property rights are completely assigned and that market failures are corrected. This paper takes the position that so-called behavioral “anomalies” are central to human decision-making and, therefore, should be the starting point for effective economic policies. This contention is supported by game theory experiments involving humans and closely related primates. This research suggests that the standard economic approach to climate change policy, with its focus on narrowly rational, self-regarding responses to monetary incentives, is seriously flawed.

Behavioral research has fundamentally changed the field of economics by putting it on a firm experimental basis (Camerer et al., 2004 and Gintis, 2007). The axioms of consumer choice, the starting point of traditional economic theory, have been re-cast as testable hypotheses, and these assumptions have come up short as defendable scientific characterizations of human behavior. It is no longer tenable for economists to claim that the self-regarding, rational actor1 model offers a satisfactory description of human decision-making. Nor do humans consistently act “as if” they obey the laws of rational choice theory, as the evidence discussed below shows. The implications for economic policy are enormous but have just begun to be explored. In its early days behavioral economics concentrated on revealing various shortcomings of the standard model of economic choice. Recently the field has moved from merely reacting against the rational actor model to identifying behavioral regularities that might form the basis for a new, more realistic model of human decision-making. Experiments such as the Ultimatum Game and the Public Goods Game have established a number of regularities in human behavior such as loss aversion, habituation, pure altruism, altruistic punishment, and hyperbolic discounting of the future. These behavioral patterns have been confirmed by neurological experiments showing how behavior is reflected in brain activity. A shortcoming of much of the behavioral economics literature is that it still considers violations of the rational actor model to be “anomalies.” “Irrational” human behavior is frequently explained by a kind of tug-of-war between the “rational” part of the brain, the cerebral cortex, and some other more primitive “emotional” part of the brain—“The overriding of deliberation by the influence of visceral factors …” as Loewenstein (2004, 691) puts it. The implication is that humans try to act rationally, but they are sometimes dragged down by their “animal” instincts. The vast majority of evolutionary biologists and neurobiologists reject this view.2 The emerging view of cognition is that the human brain is a unified, highly evolved system with complementary, rather than conflicting, components (Glimcher et al., 2005). Furthermore, it is the “anomalies” (the deviations from the rational actor model) that make humans almost unique in the animal kingdom in their degree of cultural complexity. Ironically, the rational actor model seems to be most appropriate for animals with limited cognitive ability and perhaps humans making the simplest kinds of choices. For the most important decisions humans make, culture, institutions, and give-and-take interactions are critical and should be central to any behavioral model. This paper argues that the neuroscience of choice can take behavioral economics a step further to offer a unified3 model of decision making that can lay the foundations for a science-based policy framework for critical issues involving cross-cultural cooperation and inter-generational transfers. Global climate change is used as an example of how sustainability policies might be informed by contemporary theories of human choice.

The current crisis of sustainability cannot be resolved within the confines of the system that generated it. For economic analysis this means stepping outside the Walrasian system with its emphasis on one part of human nature (greed and egoism) to the neglect of other the facets of human nature (cooperation and altruism). The marginal approach of traditional economic analysis, with its near exclusive emphasis on optimal allocation through prices and property rights, is not up the task of describing real human behavior and the structure of economic institutions. This is critically important at this stage in the development of economic thought. The mechanistic worldview has collapsed, evolutionary biology has replaced physics as the field of inspiration for the philosophy of science, and the unification of the social sciences is well underway. For social policy, leaving the confines of the current system means drawing upon aspects of human nature emphasizing cooperation, non-materialistic values, and a shared sense of urgency. Given the overwhelming dominance of the consumption-as-happiness ethic in our culture, the task of finding a less materialistic path seems daunting, but greed and accumulation are only a part of the richness of human behavioral patterns. These have come to prominence because they have been rewarded through an incentive structure that grew hand in hand with the production bonanza made possible by cheap and abundant fossil fuels. Types of behavior conducive to cooperation, doing with fewer material possessions, and recognizing the necessity of shared sacrifice are also part of the human experience. Global climate change is perhaps the most serious threat faced by modern humans. Even stabilizing future warming of the earth at 2–3 °C above its present temperature will require monumental efforts (Lenton et al., 2006 and Socolow, 2005). In fact, the task of meeting the climate change challenge may prove to be impossible. But behavioral science at least offers a more far-reaching and realistic approach to designing policies that might get us through this impending crisis.