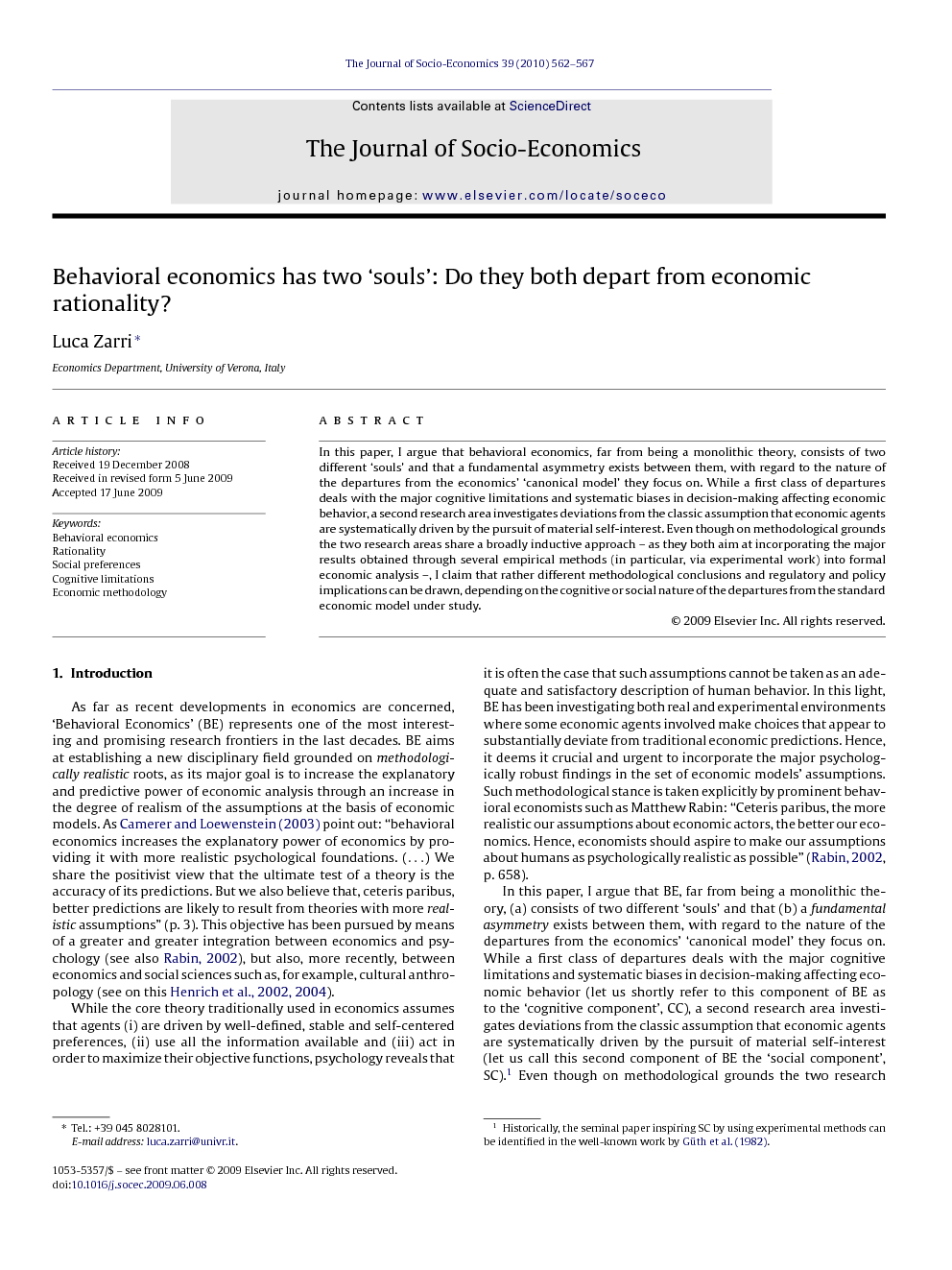 In this paper, I argue that behavioral economics, far from being a monolithic theory, consists of two different ‘souls’ and that a fundamental asymmetry exists between them, with regard to the nature of the departures from the economics’ ‘canonical model’ they focus on. While a first class of departures deals with the major cognitive limitations and systematic biases in decision-making affecting economic behavior, a second research area investigates deviations from the classic assumption that economic agents are systematically driven by the pursuit of material self-interest. Even though on methodological grounds the two research areas share a broadly inductive approach – as they both aim at incorporating the major results obtained through several empirical methods (in particular, via experimental work) into formal economic analysis –, I claim that rather different methodological conclusions and regulatory and policy implications can be drawn, depending on the cognitive or social nature of the departures from the standard economic model under study.

The fundamental asymmetry within BE can be stated as follows: while CC focuses (both theoretically and empirically) on departures from the standard economic rationality which in several cases can be characterized as ‘errors’ and make the behavior of the agents under study (at least to some extent) ‘irrational’, SC does not imply that other-regarding agents are necessarily irrational. By contrast, this research area within BE, together with the non-preference-based accounts of sociality reviewed in Section 3, calls for the integration of various forms of non-selfish rationality into the analytical framework of BE. As a consequence of this asymmetry between the two ‘souls’ of BE, I argue that also arguments in favor of regulatory and paternalistic policies ought to be – asymmetrically – mainly referred to phenomena investigated by CC, rather than SC. The point is that an increasing body of recent work has been discussing the implications for normative analysis of the findings of behavioral economics (see e.g. Kahneman et al., 1997, Camerer et al., 2003 and Thaler and Sunstein, 2003). In particular, interesting arguments have been advanced by Camerer et al. (2003) in favor of a soft version of paternalism that they call ‘asymmetric paternalism’. My point is that such arguments have to be mainly related to CC, not to SC. Camerer et al. (2003) believe that paternalism (that is “forcing, or preventing, choices for the individual's own good”) can be justified when there is “fear that even people of sound mind might not act in their best interest in certain predictable situations”15 (p. 1211). I claim that if a person is, say, inequity averse, driven by intention-based reciprocity or by other forms of (possibly non-preference-based) morality, then this has to do with how she implicitly defines her own best interests. Hence, insofar as BE's definition of ‘rationality’ does not get violated, there is no room for paternalism. By contrast, Camerer et al.’s considerations have to do with a lot of phenomena occurring within CC, as they refer to “a list of common decision-making errors that even highly competent, well-functioning people make in predictable situations” (p. 1214). In other words, I argue that the fundamental asymmetry outlined in this work entails that a crucial distinction has to be made with regard to the policy implications that behavioral findings bring about: it is mainly in the domain of CC, rather than with regard to BE as a whole, that paternalistic policies can be usefully developed. Hence, any argument in favor of soft paternalism has to be referred to one strand of literature only (though a definitely relevant one), within BE (that is CC), but not to the other one (SC).