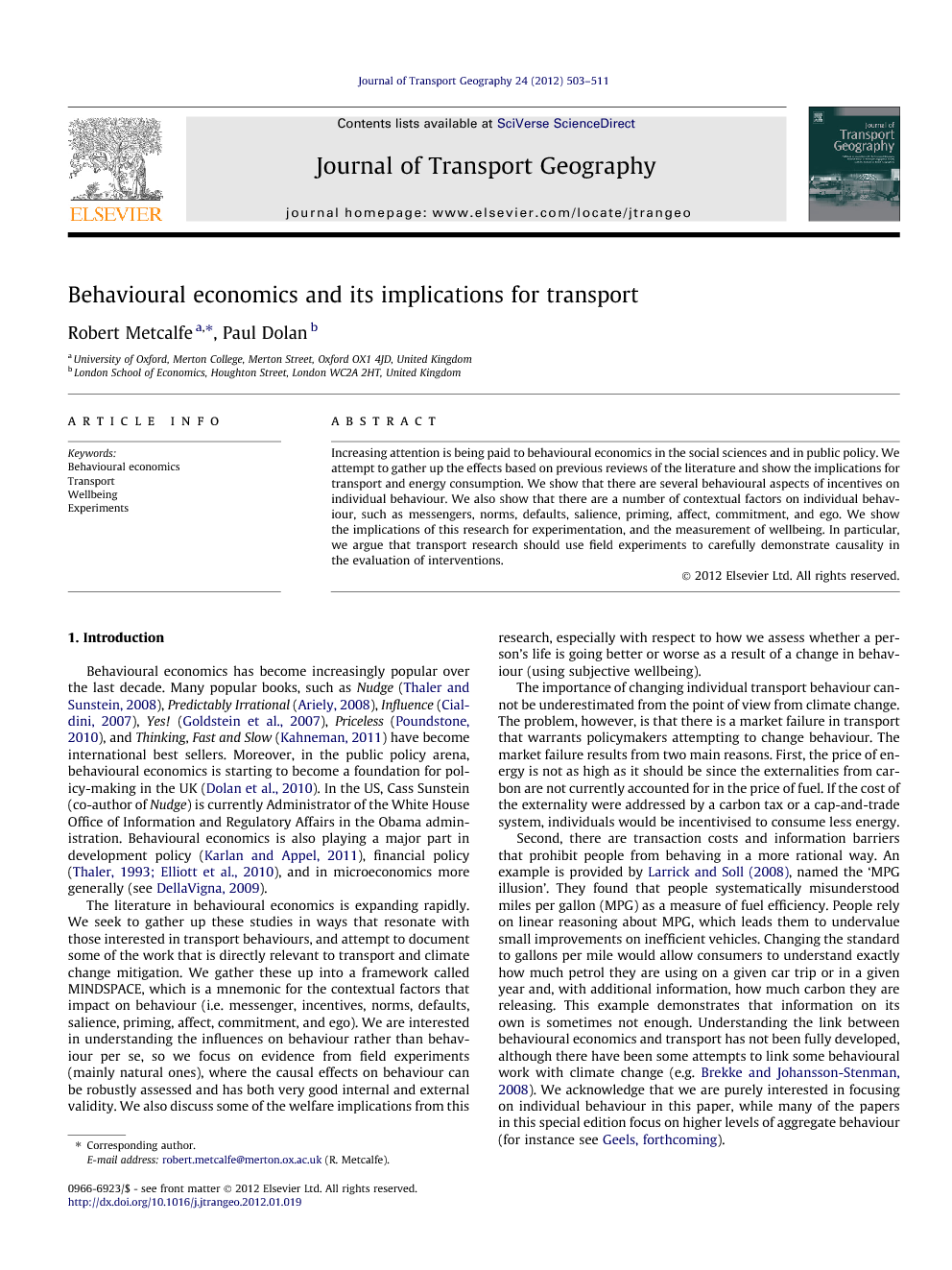 Increasing attention is being paid to behavioural economics in the social sciences and in public policy. We attempt to gather up the effects based on previous reviews of the literature and show the implications for transport and energy consumption. We show that there are several behavioural aspects of incentives on individual behaviour. We also show that there are a number of contextual factors on individual behaviour, such as messengers, norms, defaults, salience, priming, affect, commitment, and ego. We show the implications of this research for experimentation, and the measurement of wellbeing. In particular, we argue that transport research should use field experiments to carefully demonstrate causality in the evaluation of interventions.

Behavioural economics has become increasingly popular over the last decade. Many popular books, such as Nudge (Thaler and Sunstein, 2008), Predictably Irrational (Ariely, 2008), Influence (Cialdini, 2007), Yes! (Goldstein et al., 2007), Priceless (Poundstone, 2010), and Thinking, Fast and Slow (Kahneman, 2011) have become international best sellers. Moreover, in the public policy arena, behavioural economics is starting to become a foundation for policy-making in the UK (Dolan et al., 2010). In the US, Cass Sunstein (co-author of Nudge) is currently Administrator of the White House Office of Information and Regulatory Affairs in the Obama administration. Behavioural economics is also playing a major part in development policy (Karlan and Appel, 2011), financial policy ( Thaler, 1993 and Elliott et al., 2010), and in microeconomics more generally (see DellaVigna, 2009). The literature in behavioural economics is expanding rapidly. We seek to gather up these studies in ways that resonate with those interested in transport behaviours, and attempt to document some of the work that is directly relevant to transport and climate change mitigation. We gather these up into a framework called MINDSPACE, which is a mnemonic for the contextual factors that impact on behaviour (i.e. messenger, incentives, norms, defaults, salience, priming, affect, commitment, and ego). We are interested in understanding the influences on behaviour rather than behaviour per se, so we focus on evidence from field experiments (mainly natural ones), where the causal effects on behaviour can be robustly assessed and has both very good internal and external validity. We also discuss some of the welfare implications from this research, especially with respect to how we assess whether a person’s life is going better or worse as a result of a change in behaviour (using subjective wellbeing). The importance of changing individual transport behaviour cannot be underestimated from the point of view from climate change. The problem, however, is that there is a market failure in transport that warrants policymakers attempting to change behaviour. The market failure results from two main reasons. First, the price of energy is not as high as it should be since the externalities from carbon are not currently accounted for in the price of fuel. If the cost of the externality were addressed by a carbon tax or a cap-and-trade system, individuals would be incentivised to consume less energy. Second, there are transaction costs and information barriers that prohibit people from behaving in a more rational way. An example is provided by Larrick and Soll (2008), named the ‘MPG illusion’. They found that people systematically misunderstood miles per gallon (MPG) as a measure of fuel efficiency. People rely on linear reasoning about MPG, which leads them to undervalue small improvements on inefficient vehicles. Changing the standard to gallons per mile would allow consumers to understand exactly how much petrol they are using on a given car trip or in a given year and, with additional information, how much carbon they are releasing. This example demonstrates that information on its own is sometimes not enough. Understanding the link between behavioural economics and transport has not been fully developed, although there have been some attempts to link some behavioural work with climate change (e.g. Brekke and Johansson-Stenman, 2008). We acknowledge that we are purely interested in focusing on individual behaviour in this paper, while many of the papers in this special edition focus on higher levels of aggregate behaviour (for instance see Geels, forthcoming). The field of behavioural economics and science is becoming very large so in this paper we will attempt to summarise the main avenues from the literature, and relate to how they might impact on behaviours and policies relating to climate change. We will stress how this research area relies on robust and clear empirical methodology to actually understand what causes a change in human behaviour. So this will focus on understanding how field experiments can help advance the research in this regard. We will then move onto how to capture the welfare consequences from a change in behaviour, since traditional welfare analysis in economics being based mainly around people’s preferences as a measure of their wellbeing. Given that behavioural economics has shown that people do not always have consistent preferences, we will state how people’s experiences can be used to complement this measure of wellbeing. Using people’s experiences, known as subjective wellbeing (SWB), allows us to measure how life is going for someone as they experience it. These three areas (impact of contextual factors on behaviour, field experiments, and subjective wellbeing) link up for form the current literature in behavioural economics and should and can be applied directly to transport studies and issues around climate change and other human issues. So in the next section we analyse the main avenues of changing behaviour from studies that have empirically attempted to demonstrate behaviour change (using MINDSPACE). In Section 3 we demonstrate how greater research is needed using experimentation to demonstrate causality in transport research. Section 4 highlights the further need of incorporating measures of subjective wellbeing with data on transport behaviours. We will focus on SWB since it is a method that can assess people’s wellbeing without relying on people having consistent preferences. We will at all times relate to transport and climate change mitigation, but it is important to acknowledge at the outset that most areas of behavioural economics have not directly considered transport or climate change mitigation or adaptation.

Behavioural economics has shown that many contextual factors can influence and change our behaviour. To re-iterate, messengers, the perception of incentives, norms, defaults, salience, priming, affect, commitment and ego all matter to behaviour. Transport researchers should appreciate these contextual factors in people’s real behaviour. Research should demonstrate how important these factors are in the transport context, and how the combination of factors might be even more beneficial for changing behaviour and reducing energy consumption and greenhouse gas emissions in the transport sector. Notwithstanding this, there are several on-going issues in this area that researchers should be aware of. These six issues needed to be fully addressed in future research. Firstly, behavioural economics assumes that we use the two systems of the brain – the reflective and the automatic – when making decisions, although some social psychologists would argue that a great deal of the behaviour originates from the automatic system driven by the unconscious (see Wilson, 2002). Understanding the relative weight given to each system in making transport and mobility decisions seems a very interesting area of future research. Secondly, there are other domains that are characterised by market failure, such as health (Marteau et al., 2011), that are beginning to understand how behavioural economics can be used to address the failures. More needs to be done in geography, more generally, to understand how behavioural economics can be incorporated into geographical theory and modelling (initial attempts are provided by Strauss, 2009a, Strauss, 2009b, Clark, 2010, Jones et al., 2011 and Pykett, 2011). Thirdly, behavioural economics is starting to have an impact on public policy because of its ability to change behaviour at a very cost-effective rate (Dolan et al., 2012). So the benefit–cost ratios of many behavioural economic projects or policies are far higher than alternative ways of attempting to change behaviour (Allcott and Mullainathan, 2010). Therefore, one of the reasons why behavioural economics is starting to be used more frequently is because it delivers more ‘bang for the buck’ and allows scarce resources to be allocated more efficiently. Nonetheless, there needs to be more research on the magnitude and durability of these effects, especially with respect to transport behaviours, i.e. whether it delivers long-term cost-effectiveness and whether the effects are reinforcing. Fourthly, we need more evidence from different cultures around the world, as most evidence is from developed countries. This will be done through proper evaluations conducted via field and natural experiments. Only through proper evaluations with good identification strategies for causality will we be able to rule out the problem of second-best (Shogren and Taylor, 2008). This is where the links with human and physical geography and economics could become strong. Fifthly, the effect sizes in the empirical studies discussed in Section 2 are very large considering the costs of the interventions, but more needs to be done on determining how linking up the individual elements of MINDSPACE could be even more cost-effective for climate change policy. More discussion and evidence is needed to determine whether transport policy can be solely centred around behavioural science, or whether it is a contributory tool to the current policy environment. We are very clear though in the need for transport studies to use field experiments. Sixthly, further research needs to also understand the wellbeing consequences from changing transport behaviour. There is a large potential for researchers in transport to link up behaviour change with changes in wellbeing. This will enable behaviour change in transport to reduce actual suffering and improve people’s lives, while at the same time reducing the carbon dioxide emissions from transport. Taken together, a focus on the impact of contexts for behaviour, field experiments, and the measurement of people’s experiences, will allow researchers to fully answer the important questions in transport studies and climate change now and in the future.