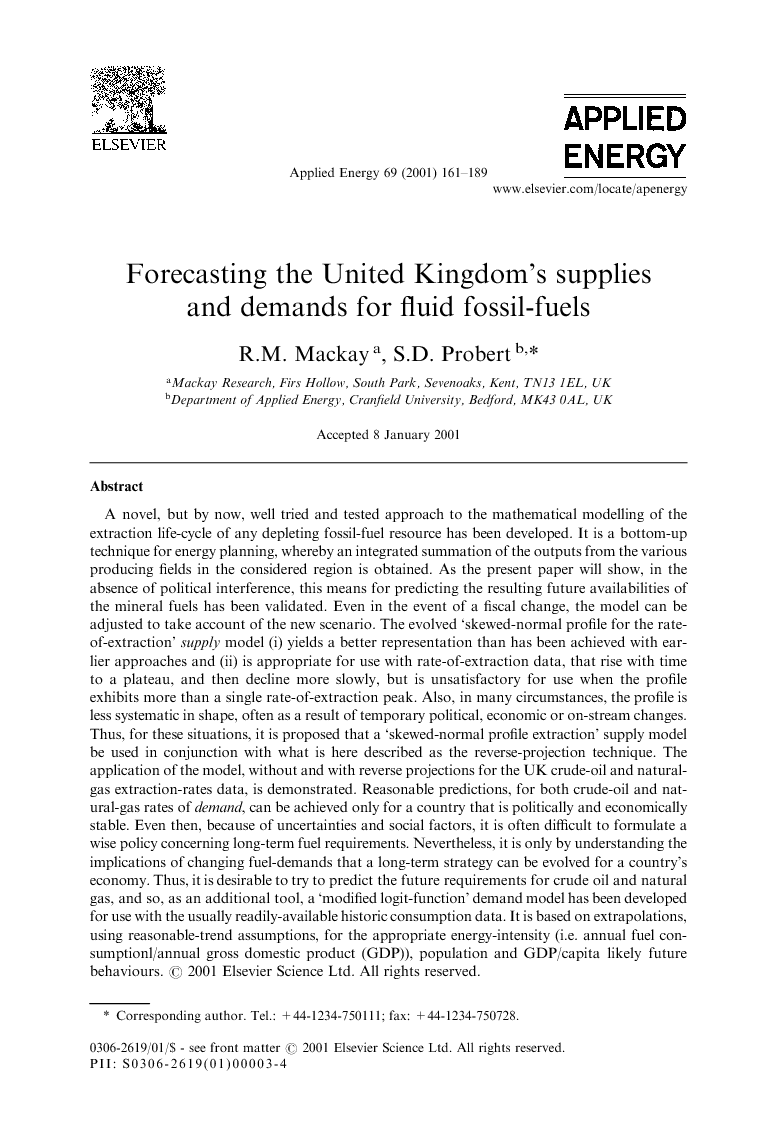 A novel, but by now, well tried and tested approach to the mathematical modelling of the extraction life-cycle of any depleting fossil-fuel resource has been developed. It is a bottom-up technique for energy planning, whereby an integrated summation of the outputs from the various producing fields in the considered region is obtained. As the present paper will show, in the absence of political interference, this means for predicting the resulting future availabilities of the mineral fuels has been validated. Even in the event of a fiscal change, the model can be adjusted to take account of the new scenario. The evolved ‘skewed-normal profile for the rate-of-extraction’ supply model (i) yields a better representation than has been achieved with earlier approaches and (ii) is appropriate for use with rate-of-extraction data, that rise with time to a plateau, and then decline more slowly, but is unsatisfactory for use when the profile exhibits more than a single rate-of-extraction peak. Also, in many circumstances, the profile is less systematic in shape, often as a result of temporary political, economic or on-stream changes. Thus, for these situations, it is proposed that a ‘skewed-normal profile extraction’ supply model be used in conjunction with what is here described as the reverse-projection technique. The application of the model, without and with reverse projections for the UK crude-oil and natural-gas extraction-rates data, is demonstrated. Reasonable predictions, for both crude-oil and natural-gas rates of demand, can be achieved only for a country that is politically and economically stable. Even then, because of uncertainties and social factors, it is often difficult to formulate a wise policy concerning long-term fuel requirements. Nevertheless, it is only by understanding the implications of changing fuel-demands that a long-term strategy can be evolved for a country's economy. Thus, it is desirable to try to predict the future requirements for crude oil and natural gas, and so, as an additional tool, a ‘modified logit-function’ demand model has been developed for use with the usually readily-available historic consumption data. It is based on extrapolations, using reasonable-trend assumptions, for the appropriate energy-intensity (i.e. annual fuel consumptionl/annual gross domestic product (GDP)), population and GDP/capita likely future behaviours.

Man's desire to be able to foretell wisely the future has always existed: by the availability of such predictions, we attempt to manage our lives better and maximise our prospects. In medieval and subsequent times, this aspect of astrology was a highly-rated scholastic discipline at the Universities of Naples and Oxford. In 1441, two Oxford dons were even hanged for employing astrological means in an attempt to procure the death of King Henry the Sixth. Even predicting when an event had occurred can be spectacularly wrong. For instance, John Lightfoot, a Cambridge University academic wrote “Heaven and Earth were created on October 23rd, 4004 B.C., at nine o'clock in the morning”. This assertion was widely accepted as reasonable until Charles Darwin published “On the Origin of Species”. The challenge to predict accurately is now a well-respected academic pursuit. The predictions are usually based on (i) extrapolating forwards the past behaviour, via reasonably-rigorous procedures — remembering that those who ignore the lessons of past mistakes are likely to repeat the same mistakes — and (ii) a vision of the future, which is already shared by many well-informed strategists. Nevertheless, even so, it is only right and proper that we employ a sceptical ambivalence towards such predictions. Predicting the future is fraught with difficulties, uncertainties and mistakes. Hence we did not anticipate the rise in feminism in the seventies or the fall of the Berlin wall in the eighties. Nevertheless man has never been inhibited by incorrect forecasts of previous generations from trying to read the runes. Even if your forecasts are inexact, the process involved in making the predictions will probably require you to understand better the influential parameters and benefits. For the particular problem we tackle in this investigation, namely the predictions of the future rates of crude-oil and natural-gas extraction from an individual UK field, a mathematical technique has been devised. For the whole country, for any one instant in time, it is necessary to sum the predictions for all the UK fields, each of which is at a different life-stage with respect to its depletion. However, vested interests will also significantly influence future behaviour. For instance, naturally the predicted behaviour can be affected by political decisions, e.g. the ‘dash for natural gas’ phase triggered by the Government's desire to reduce polluting emissions arising as a result of electricity generation. This led to the burning of less coal and more natural gas.

The skewed-normal profile extraction supply model provides both a realistic approach and a better fit to the raw extraction data than earlier models, such as the Hubbert model. In addition, fewer assumptions are required for the SNPE model. A novel feature is the application of the reverse-projection technique to the SNPE model. This adaptation facilitates increased-accuracy forecasting for the United Kingdom's indigenous crude-oil and natural-gas supply profiles. The simple modified logit-function demand model has been developed for use with readily-available data to forecast crude-oil and natural-gas demands for any country that is economically stable. To demonstrate the validity of the MLF model, realistic annual-demand projections have been achieved for crude oil and natural gas for the United Kingdom. The predictions in this paper suggest, for the UK, that we should be putting even greater effort into achieving crude-oil and natural-gas thrift (e.g. insisting upon higher standards of thermal insulation of our homes and using cars with far higher m.p.g. performances) because, soon, the UK is likely to become a net importer of both these fossil fuels.