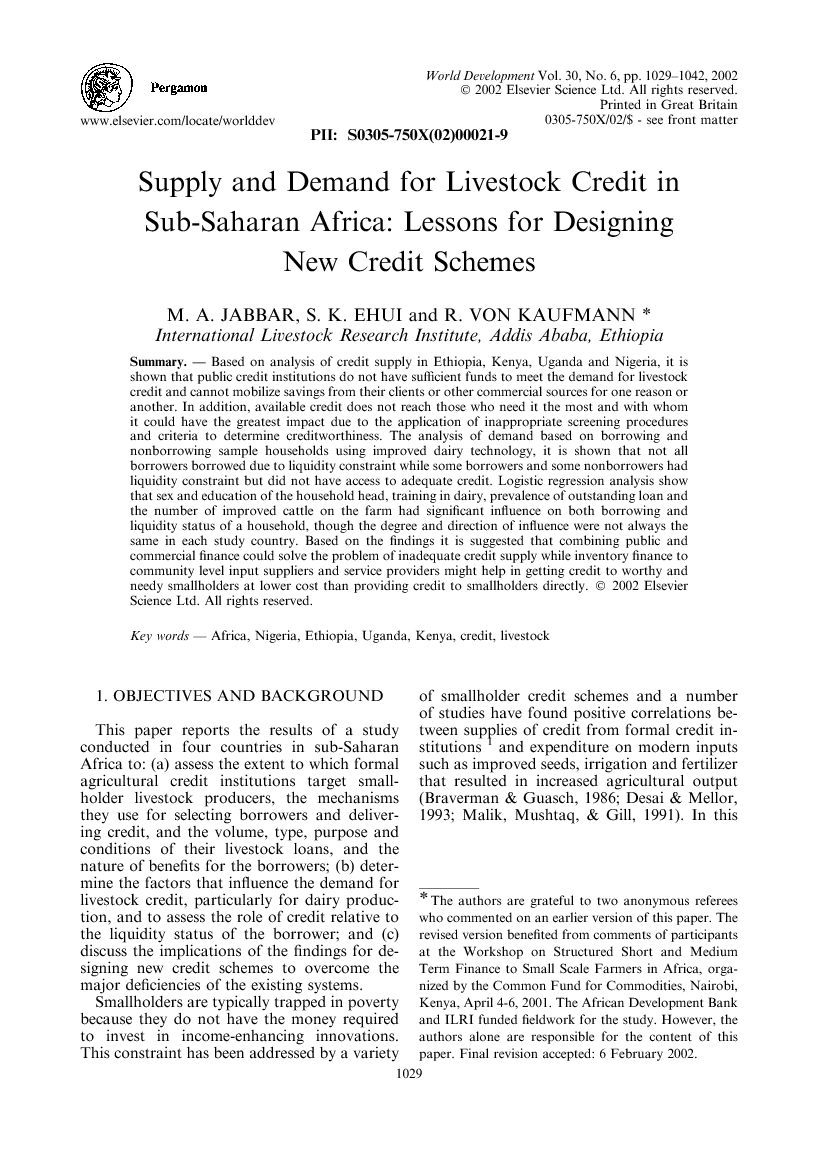 Based on analysis of credit supply in Ethiopia, Kenya, Uganda and Nigeria, it is shown that public credit institutions do not have sufficient funds to meet the demand for livestock credit and cannot mobilize savings from their clients or other commercial sources for one reason or another. In addition, available credit does not reach those who need it the most and with whom it could have the greatest impact due to the application of inappropriate screening procedures and criteria to determine creditworthiness. The analysis of demand based on borrowing and nonborrowing sample households using improved dairy technology, it is shown that not all borrowers borrowed due to liquidity constraint while some borrowers and some nonborrowers had liquidity constraint but did not have access to adequate credit. Logistic regression analysis show that sex and education of the household head, training in dairy, prevalence of outstanding loan and the number of improved cattle on the farm had significant influence on both borrowing and liquidity status of a household, though the degree and direction of influence were not always the same in each study country. Based on the findings it is suggested that combining public and commercial finance could solve the problem of inadequate credit supply while inventory finance to community level input suppliers and service providers might help in getting credit to worthy and needy smallholders at lower cost than providing credit to smallholders directly.

This paper reports the results of a study conducted in four countries in sub-Saharan Africa to: (a) assess the extent to which formal agricultural credit institutions target smallholder livestock producers, the mechanisms they use for selecting borrowers and delivering credit, and the volume, type, purpose and conditions of their livestock loans, and the nature of benefits for the borrowers; (b) determine the factors that influence the demand for livestock credit, particularly for dairy production, and to assess the role of credit relative to the liquidity status of the borrower; and (c) discuss the implications of the findings for designing new credit schemes to overcome the major deficiencies of the existing systems. Smallholders are typically trapped in poverty because they do not have the money required to invest in income-enhancing innovations. This constraint has been addressed by a variety of smallholder credit schemes and a number of studies have found positive correlations between supplies of credit from formal credit institutions1 and expenditure on modern inputs such as improved seeds, irrigation and fertilizer that resulted in increased agricultural output (Braverman & Guasch, 1986; Desai & Mellor, 1993; Malik, Mushtaq, & Gill, 1991). In this way formal credit played a major role in the wide scale adoption of improved technologies that led to the Green Revolution. It has been shown that formal credit increases in importance relative to informal credit as economies develop and new technologies are adopted (Desai & Mellor, 1993; Heidhues, 1995). There is less empirical evidence on the role of credit in the smallholder livestock sector. For example, contrary to expectations, the Grameen Bank in Bangladesh extends as much as 40–50% of its loans to landless and poor farmers to acquire and raise livestock. The incentive for this is livestock's potential for generating regular incomes and realizable assets that are essential to enabling the beneficiaries to stay out of poverty in times of adversity. Processing and marketing of livestock products are also especially attractive to women borrowers. But these farmers rarely adopt improved livestock technologies leaving untapped much of the potential of the animals they purchase. A recent study in East Africa has shown that credit has a higher potential for impact through higher input use and milk yield if targeted to liquidity-constrained farms than otherwise (Freeman, Ehui, & Jabbar, 1998). A better understanding of the role of credit in the adoption of livestock technology in sub-Saharan Africa is urgently required to make it more effective in improving the livelihoods of resource-poor livestock owners and low-income consumers of livestock products. During the 1970s and early 1980s, growth in the demand for meat and milk in sub-Saharan Africa outstripped supply partly because of subsidized imports, particularly that of milk. Thereafter, as productivity continued to decline, the deficit could not be made up by imports because of falling foreign exchange reserves and consumers had less meat and milk on their tables. Projections to 2020 indicate continued rising demand for animal products with corresponding deficits, unless productivity can be improved significantly (Delgado, Rosegrant, Steinfeld, Ehui, & Courbois, 1999). This deficit is an important issue because, apart from providing high-value food, the livestock sector contributes substantially to the economies of sub-Saharan countries by providing income, employment and foreign exchange. They contribute to sustainable agricultural production with inputs and services such as draught power, manure and transportation for crop production. Livestock products—meat, milk, eggs, wool, hides and skins—on average account for 28% of agricultural GDP of sub-Saharan African countries. This share increases to about 35% when the value of animal traction, transport and manure are included. In addition, the share increases as agriculture intensifies. In summary, the livestock sector is a vital component of national development with multiplier effects in processing and marketing which is falling far short of its potential (Winrock, 1992). Since the early 1990s, the introduction of structural adjustment programs led to a reduction of real expenditure on agriculture. This included falling supplies of agricultural credit, which reduced uptake of innovations by the majority of resource-poor smallholders. Livestock technology adoption has probably suffered proportionately more in this process (De Haan, 1995) because livestock enterprises such as those involving high-yielding crossbred dairy cows require high initial outlays to acquire the animals and construct housing and install other infrastructure. They also require substantial working capital. Furthermore, in contrast to annual crops, it takes several years to raise income from investment in livestock production; meanwhile substantial expenses are incurred in, for example, maintaining maturing animals. In this paper, the supply and demand side issues related to livestock credit are analysed based on field surveys in four countries. In Section 2, sampling and data sources are described. In Section 3, the issues related to credit supply are discussed. In Section 4, the current extent of borrowing and liquidity constraint, and the determinants of being borrowers and being liquidity constraints are discussed. In Section 5, the findings are summarized and their implications for designing new credit schemes are discussed with an illustration.