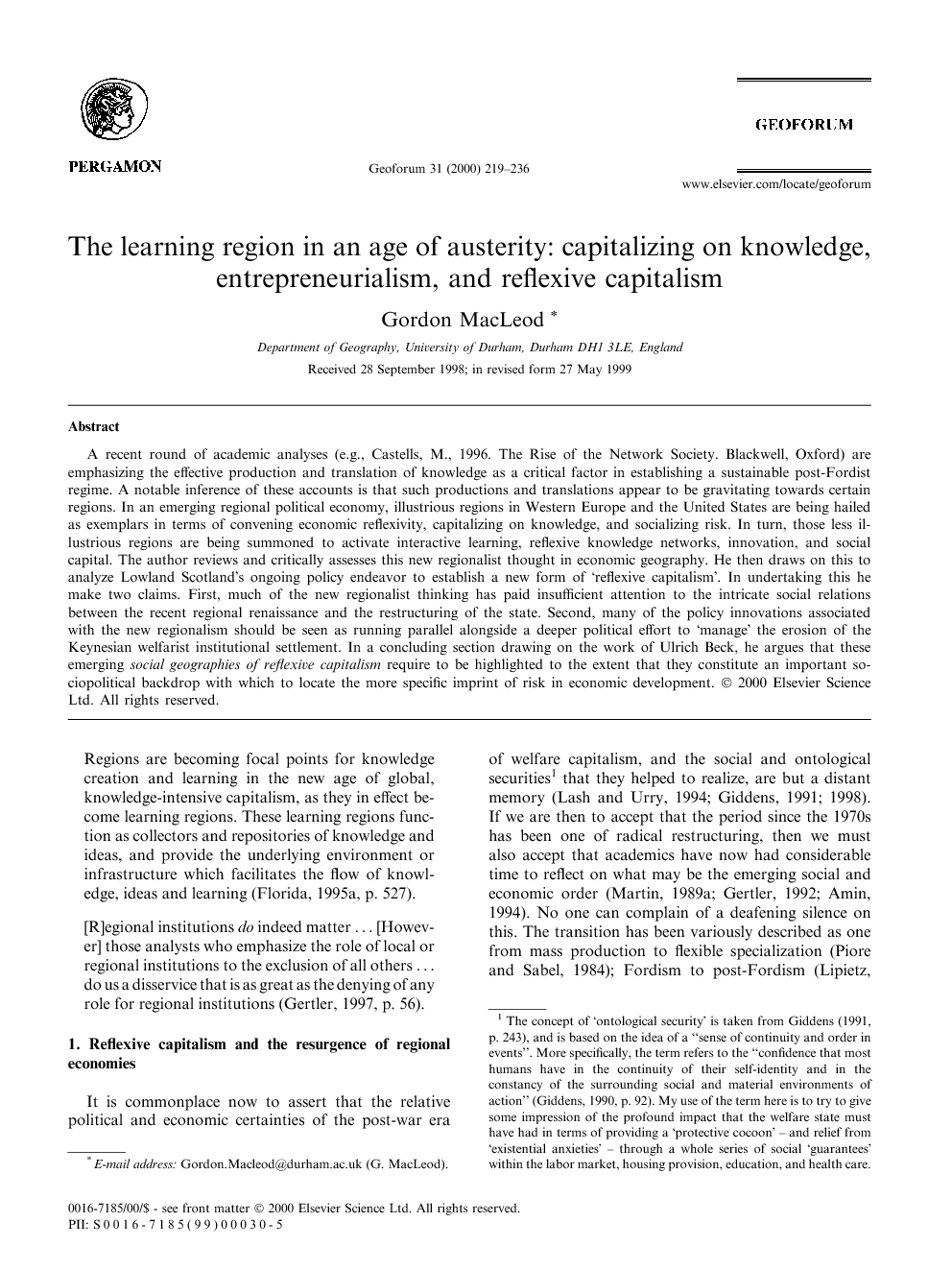 A recent round of academic analyses (e.g., Castells, M., 1996. The Rise of the Network Society. Blackwell, Oxford) are emphasizing the effective production and translation of knowledge as a critical factor in establishing a sustainable post-Fordist regime. A notable inference of these accounts is that such productions and translations appear to be gravitating towards certain regions. In an emerging regional political economy, illustrious regions in Western Europe and the United States are being hailed as exemplars in terms of convening economic reflexivity, capitalizing on knowledge, and socializing risk. In turn, those less illustrious regions are being summoned to activate interactive learning, reflexive knowledge networks, innovation, and social capital. The author reviews and critically assesses this new regionalist thought in economic geography. He then draws on this to analyze Lowland Scotland’s ongoing policy endeavor to establish a new form of ‘reflexive capitalism’. In undertaking this he make two claims. First, much of the new regionalist thinking has paid insufficient attention to the intricate social relations between the recent regional renaissance and the restructuring of the state. Second, many of the policy innovations associated with the new regionalism should be seen as running parallel alongside a deeper political effort to ‘manage’ the erosion of the Keynesian welfarist institutional settlement. In a concluding section drawing on the work of Ulrich Beck, he argues that these emerging social geographies of reflexive capitalism require to be highlighted to the extent that they constitute an important sociopolitical backdrop with which to locate the more specific imprint of risk in economic development.

It is commonplace now to assert that the relative political and economic certainties of the post-war era of welfare capitalism, and the social and ontological securities1 that they helped to realize, are but a distant memory Lash and Urry, 1994, Giddens, 1991 and Giddens, 1998. If we are then to accept that the period since the 1970s has been one of radical restructuring, then we must also accept that academics have now had considerable time to reflect on what may be the emerging social and economic order Martin, 1989a, Gertler, 1992 and Amin, 1994. No one can complain of a deafening silence on this. The transition has been variously described as one from mass production to flexible specialization (Piore and Sabel, 1984); Fordism to post-Fordism (Lipietz, 1994) or flexible accumulation (Harvey, 1989); organized to disorganized capitalism (Lash and Urry, 1987); and industrial capitalism to the informational age or the network society (Castells, 1996). These labels have been useful in raising our awareness of a whole series of changes in capital and labor markets, corporate strategies, industrial technologies, industrial geographies, financial regulation, labor processes, managerial hierarchies, and the restructuring of the (welfare) state. However, it has often been the case that such interpretations have tended to fall back on an overly structural analysis: one which presents political economic evolution as a succession of binary histories, themselves translated into a series of systemic ‘models, fantasies and phantoms of transition’ Sayer, 1989 and Amin, 1994. Often these models ignore what may be some extant continuities, rigidities, and contradictions in the prevailing socioeconomic, political and institutional conditions Hudson, 1989 and Gertler, 1992. They have also glossed over many questions relating to the uneven development of new leading edge industrial and institutional innovations (Tickell and Peck, 1992), political struggle (Graham 1992), and gender relations (McDowell, 1991). And in analytical terms, it has been claimed that these approaches have tended to shy away from exploring the dynamic processes, interpretative actions, and situated path dependencies through which particular economic, social, and political forms are constituted Thrift, 1989, Lash and Urry, 1994 and Painter and Goodwin, 1995. A growing acknowledgement of these empirical and analytical anomalies has led some scholars to take a more cautious line to argue that, as yet, western capitalist societies (not to mention those in Eastern Europe), appear to be engaged in an enduring search for a new institutional compromise (Peck and Tickell, 1994). One theorist who has taken this search seriously is Michael Storper (1997). Storper assesses the emerging socioeconomic conjuncture as one of reflexive capitalism. Here, he extends his earlier work on regional economic development, and, in an effort to transcend the structuralist limitations of the above approaches, he places at the very core of his analysis considerations of cognitive reflexivity, human subjectivity and agency (cf. Beck et al., 1994, Lash and Urry, 1994 and Cooke, 1997)2. Storper defines contemporary reflexive capitalism as: …a system that manufactures new kinds of risks (economic, personal, ecological, psychological, social, etc.). In the economic sphere, these risks are expressed through the redefinition of competition – what it takes to win and how it is possible to lose. Winning has become a much more complex target, because the conditions which a firm, region, or production system must now satisfy in order to win are manufactured and remanufactured more thoroughly and more rapidly than ever before, creating a moving target for success and a shifting minefield of risks of failure (Storper, 1997, p. 30).