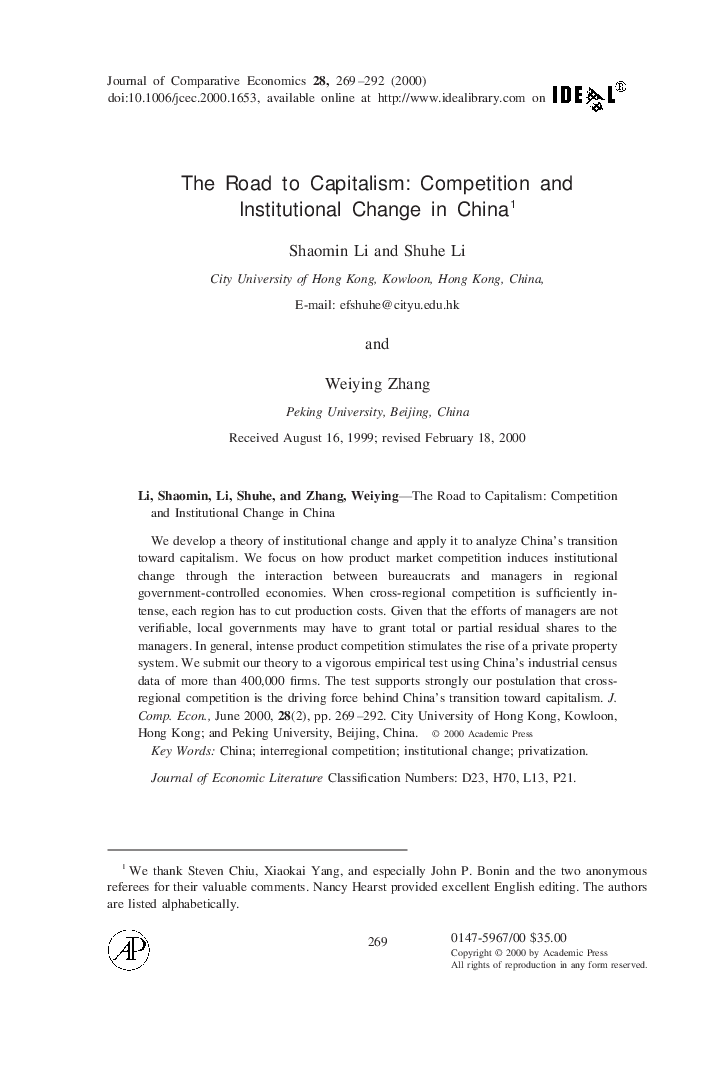 Wedevelop a theory of institutional change and apply it to analyze China's transition toward capitalism. We focus on how product market competition induces institutional change through the interaction between bureaucrats and managers in regional government-controlled economies. When cross-regional competition is sufficiently intense, each region has to cut production costs. Given that the efforts of managers are not verifiable, local governments may have to grant total or partial residual shares to the managers. In general, intense product competition stimulates the rise of a private property system. We submit our theory to a vigorous empirical test using China's industrial census data of more than 400,000 firms. The test supports strongly our postulation that cross-regional competition is the driving force behind China's transition toward capitalism.J. Comp. Econom., June 2000, 28(2), pp. 269–292. City University of Hong Kong, Kowloon, Hong Kong; and Peking University, Beijing, China.

In this paper, we develop a theory of institutional change in the context of a transition economy. We show that the rise of a private ownership system occurs as a consequence of cross-regional competition. Initially the Chinese economic reforms were not intended to privatize state and collective enterprises. However, the decentralization policy triggered privatization eventually and the establish- ment of new private firms through cross-regional competition. In 1997, the Chinese Communist Party’s Fifteenth Party Congress promoted the formation of joint-stock systems and various other organizational forms to bail out the vast majority of failing SOEs; this move is widely viewed as a covert act of privatization. Formal open privatization in China has thus far not been adopted as a central government policy for ideological reasons. However, competition is far more powerful than ideology. Regardless of whether or not the central government will draw up a blueprint for full privatization, both our theory and reality show that the privatization process will continue to accelerate with its own logic and vigor. China has reached a point of no return on the road to capitalism. The Chinese experience demonstrates that the invisible hand is not only powerful in allocating resources; it is also powerful in creating institutions. Once decentralization begins, market competition may precipitate a self-enforcing development of a private ownership system. The newly founded and privatized firms intensify, in turn, market competition. This is the major lesson that other transition and emerging economies may draw from China’s experience. Nevertheless, the emergence of a private ownership system requires a sound legal system to protect property rights. In particular, de facto ownership by managers must eventually become de jure private ownership. Commercial laws are also needed to enforce contracts between enterprises. Although China enacted the General Principles of Civil Law in 1986, the Law of Civil Litigation in 1991, and the Contract Law in 1999, and many other laws since these, there are two major problems in its current commercial law system. First, there are no clear and detailed rules to protect private property. To facilitate efficient private invest- ments, detailed civil codes and procedures are needed to protect private property under different contingencies. Second, cross-regional commercial disputes are settled in local courts that are virtually controlled by local governments, in that the local governments provide the courts with both financial and personnel resources. To mitigate local protectionism and to facilitate interregional compe- tition, local courts must become independent of local government control or major cross-regional commercial disputes must be settled by higher-level courts, whose jurisdiction is common to the regions. We are only beginning to understand the driving forces behind institutional change, in general, and the rise of private ownership systems, in particular. Much work remains to be done. Although we have demonstrated how decentralization can promote the development of a private ownership system through competi- tion, we do not yet have a theory to explain what drives decentralization, nor do we have a theory to explain how de facto property rights evolve into de jure property rights. Exploration of these topics will enhance our understanding of institutional change. This study provides a foundation on which to base such endeavors.