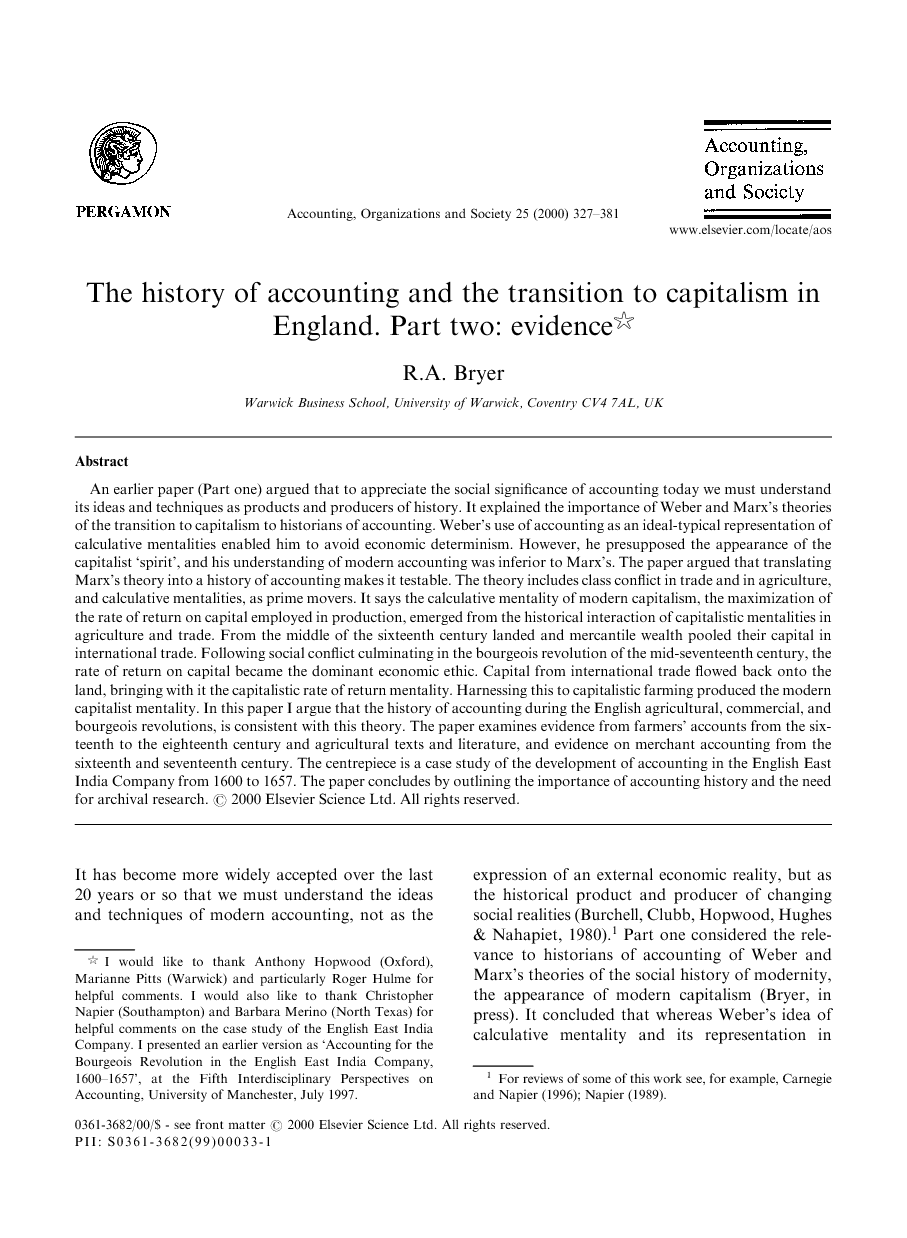 An earlier paper (Part one) argued that to appreciate the social significance of accounting today we must understand its ideas and techniques as products and producers of history. It explained the importance of Weber and Marx's theories of the transition to capitalism to historians of accounting. Weber's use of accounting as an ideal-typical representation of calculative mentalities enabled him to avoid economic determinism. However, he presupposed the appearance of the capitalist ‘spirit’, and his understanding of modern accounting was inferior to Marx's. The paper argued that translating Marx's theory into a history of accounting makes it testable. The theory includes class conflict in trade and in agriculture, and calculative mentalities, as prime movers. It says the calculative mentality of modern capitalism, the maximization of the rate of return on capital employed in production, emerged from the historical interaction of capitalistic mentalities in agriculture and trade. From the middle of the sixteenth century landed and mercantile wealth pooled their capital in international trade. Following social conflict culminating in the bourgeois revolution of the mid-seventeenth century, the rate of return on capital became the dominant economic ethic. Capital from international trade flowed back onto the land, bringing with it the capitalistic rate of return mentality. Harnessing this to capitalistic farming produced the modern capitalist mentality. In this paper I argue that the history of accounting during the English agricultural, commercial, and bourgeois revolutions, is consistent with this theory. The paper examines evidence from farmers' accounts from the sixteenth to the eighteenth century and agricultural texts and literature, and evidence on merchant accounting from the sixteenth and seventeenth century. The centrepiece is a case study of the development of accounting in the English East India Company from 1600 to 1657. The paper concludes by outlining the importance of accounting history and the need for archival research.

The paper has argued that historians of accounting have much to gain from an engagement with Weber and Marx's theories of the transition to capitalism. We found that although the accounting focus of Weber is explicit, and his idea of calculative mentality avoids economic determinism, his vision of capital accounting is a dim and distorted reflection of reality. While accounting is usually only implicit in Marx, its recognition also allows him to avoid determinism, and his vision is richly realistic. Recognising the accounting in Marx allowed us to interrogate his historical writings for his explanation of the transition. According to Marx's theory the calculative mentality of modern capitalism appears in a historical process, unique to England, where in the sixteenth century merchant capital was pooled with capital derived from a formally capitalistic agriculture. Investment of surpluses from socialised and social capital from overseas trade in agriculture followed the bourgeois revolution of the mid-seventeenth century. This revolution establishes the demand for an equal return for equal capital as the dominant economic ethic. In this historical process, the rate of return mentality combines with the mentality of maximizing surplus labour within production, to produce the modern capitalist mentality, that pursues the maximum rate of return on capital employed in production. When we understand Marx's explanation of the transition as a history of accounting, it is not the deus ex machina many have claimed (see: Holton, 1985 and Martin, 1983). Furthermore, it is open to historical investigation. Marx's theory does not posit the pre-existence of modern capitalism — either as commerce or exchange relations or wage labour, or as a calculative mentality — as an external driving force in the dissolution of the feudal mode of production. Rather, Marx explains capitalism as the outcome of the pursuit of monetary wealth within feudalism — the “historic process is not the product of capital but the presupposition for it” (Marx, 1973, p. 505). This interpretation contradicts the common view that “the identification of the dissolution of feudalism with the necessary rise of capitalism…[was] a view which Marx was well known for” (Tribe, 1978, p. 15). The question, of course, is the evidence. To what extent does the history of accounting support Marx's theory? Part Two (Bryer, in press-c) tests his theory against the available evidence. It outlines social histories of accounting for the agricultural, commercial and bourgeois revolutions, and shows they are consistent with Marx's theory of the transition. The paper calls for extensive archival research.