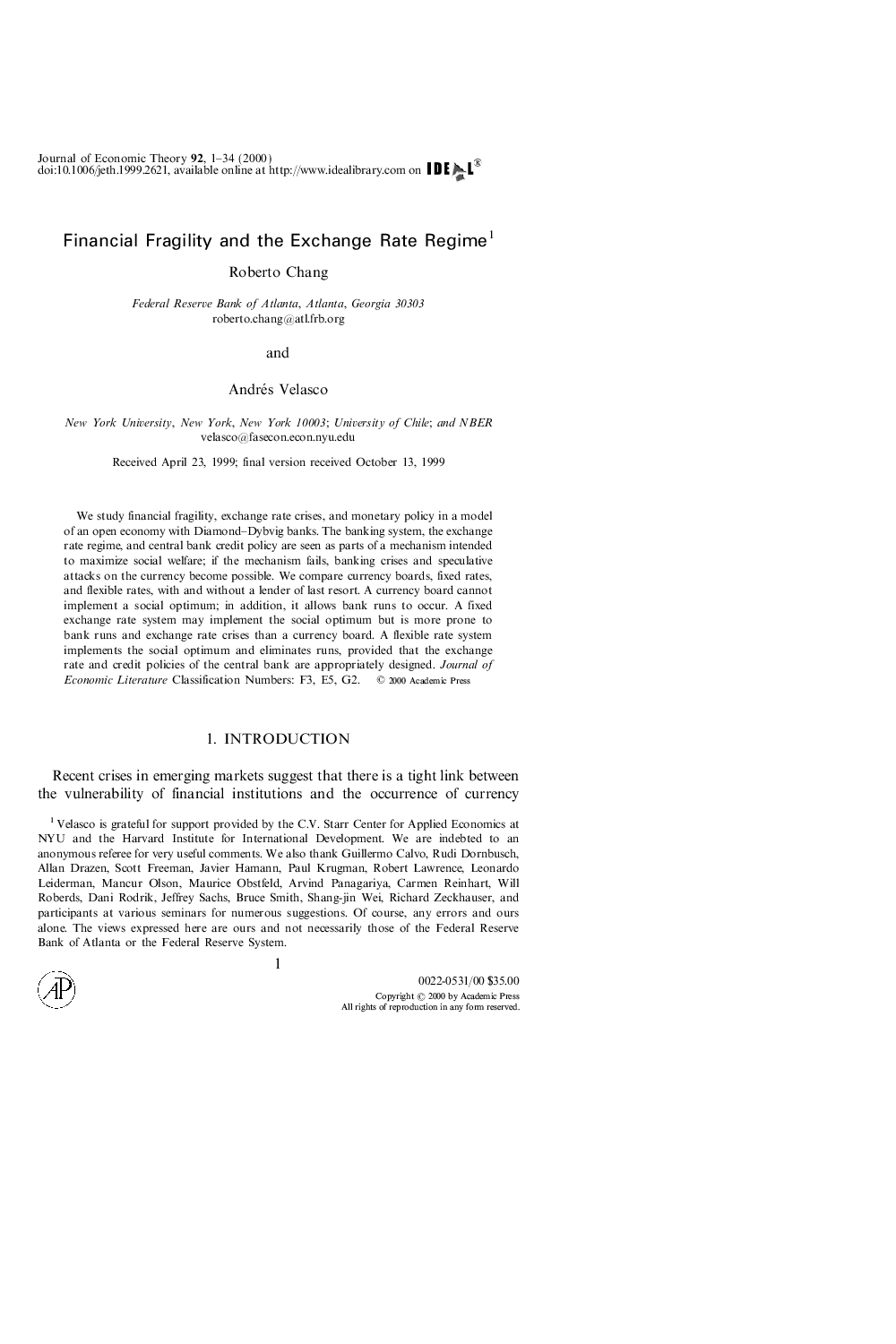 We study financial fragility, exchange rate crises, and monetary policy in a model of an open economy with Diamond–Dybvig banks. The banking system, the exchange rate regime, and central bank credit policy are seen as parts of a mechanism intended to maximize social welfare; if the mechanism fails, banking crises and speculative attacks on the currency become possible. We compare currency boards, fixed rates, and flexible rates, with and without a lender of last resort. A currency board cannot implement a social optimum; in addition, it allows bank runs to occur. A fixed exchange rate system may implement the social optimum but is more prone to bank runs and exchange rate crises than a currency board. A flexible rate system implements the social optimum and eliminates runs, provided that the exchange rate and credit policies of the central bank are appropriately designed. Journal of Economic Literature Classification Numbers: F3, E5, G2.

Recent crises in emerging markets suggest that there is a tight link between the vulnerability of financial institutions and the occurrence of currency1 Velasco is grateful for support provided by the C.V. Starr Center for Applied Economics at NYU and the Harvard Institute for International Development. We are indebted to an anonymous referee for very useful comments. We also thank Guillermo Calvo, Rudi Dornbusch, Allan Drazen, Scott Freeman, Javier Hamann, Paul Krugman, Robert Lawrence, Leonardo Leiderman, Mancur Olson, Maurice Obstfeld, Arvind Panagariya, Carmen Reinhart, Will Roberds, Dani Rodrik, Jeffrey Sachs, Bruce Smith, Shang-jin Wei, Richard Zeckhauser, and participants at various seminars for numerous suggestions. Of course, any errors and ours alone. The views expressed here are ours and not necessarily those of the Federal Reserve Bank of Atlanta or the Federal Reserve System.

We have provided a detailed and formal account of the possible interac- tions between bank fragility and the exchange rate and monetary regimes. We have shown, in a world in which banks play a well defined micro- economic role, that different nominal regimes induce different real alloca- tions, and also that they imply varying degrees of financial fragility. Some of the assumptions we have made are particularly strong and may call into question the generality of our results. Consequently, in this section we elaborate on these assumptions, discuss how they could be weakened, and speculate on the consequences of doing so. We noted in Section 2 that our way of modeling the demand for pesos was overly restrictive. To be sure, some aspects of our specification can be changed without altering the essence of the analysis. In particular, the assumption that impatient agents do not derive utility from holding pesos is only one of convenience; assuming that their utility, like that of patient types, depends on real peso balances can be accommodated easily. Suppose, for instance, that the utility of impatient agents is not u(x) but u[x+/(NE1)], whereN denotes pesos held between periods 1 and 2. The first order conditions for the social planning problem of Subsection 4.1 would then include (4.5), /$(N)=0, and u$[x+/(N)]=Ru$[ y+/(M)]. Amending the rest of our analysis to deal with this case is a straightforward matter. In a demand deposit system, impatient agents would have the right to withdraw x+N pesos in period 1, and to exchange x pesos for dollars at the Central Bank; the illiquidity condition (4.11) would still be the crucial condition for theexistence of crises, although the values of x, b, and k would be those given by the new planning problem. One noteworthy difference, which the inter- ested reader can verify, is that the illiquidity condition (4.11) would be less likely to hold with this specification. The reason is that, given that impatient agents gain from holding pesos, the planning solution would reduce x relative to the previous case. Likewise, it would be straightforward to allow for utility functions that include dollar balances. For example, one may suppose that the utility of patient agents is given by u[ y+/(ME2)]+&(D), where D denotes dollars held between periods 1 and 2 and & is an increasing, concave function. The planning solution would then assign some dollars to patient agents in period 1. The interested reader is invited to supply the remaining details. Clearly, it would be efficient for D to be financed by increasing the bank's liquid investment. Hence this extension, like the previous one, would make illiquidity less likely. While some features of our model can be generalized easily, there is the more fundamental objection that introducing a demand for pesos by inserting them into utility functions is a brute-force method. We decided to maintain that assumption for tractability, and also because assuming money in the utility function has been shown, in some contexts, to be a valid approximation to other, more natural ways to justify a demand for fiat money. But further exploration is needed to identify how such an approximation affects our analysis. This may involve explicitly modeling the fundamental frictions that may give money a role, as in [1, 4, 26, 28], and other recent monetary versions of the DiamondDybvig model. One result that does seem sensitive to the way we introduce pesos is the welfare difference between currency boards and fixed exchange rates. That difference depends crucially on the fact that a currency board imposes a positive opportunity cost, associated with the foreign exchange reserves backing peso holdings between periods. That opportunity cost would dis- appear, for example, if agents (somewhat implausibly) did not demand pesos between periods; this would occur under some assumptions on trans-actions patterns. In such a case, currency boards and fixed exchange rates would differ only in that the former does not allow the Central Bank to be the lender of last resort. We believe that, with the qualifications just mentioned, our other results are robust to changes in the way the demand for pesos is introduced. This is because our analysis is largely based on the relationships between depositors, the commercial bank, and the Central Bank; the precise source of the demand for pesos does not make much of a difference. A second assumption which deserves elaboration is that foreign borrow- ing has a limit, even if that limit can be arbitrarily large. We are not alone in making this assumption: the huge literature spawned by [19] uniformlyassumes that domestic central banks cannot borrow international reserves, and some limit on international borrowing would seem to be needed if we are to study currency crises.23 Rationalizing some credit limit should not be, by itself, a hard enterprise: one may appeal to the many theories of infor- mational imperfections or frictions associated with sovereign debt. However, the rationale onechooses may affect the particular form of the credit limit. Our analysis has postulated a very simple specification of the credit limit; our results may depend on that specification. This is, in our view, a promising question for future research. A final comment is warranted on the assumption, made in the previous section, that the liquidation of the long term asset is limited so as to always guarantee the repayment of foreign debt. This assumption was made mostly for the sake of tractability. Dropping it would not eliminate the results of this paper; however, it would introduce new possibilities, derived from the potential default on foreign debt. In particular, the possibility of foreign creditors' panics, and their interaction with domestic bank runs, would have to be examined. We did not tackle this issue here in order to keep our focus on exchange rate regimes and monetary policy; however, we have made some progress in [5].