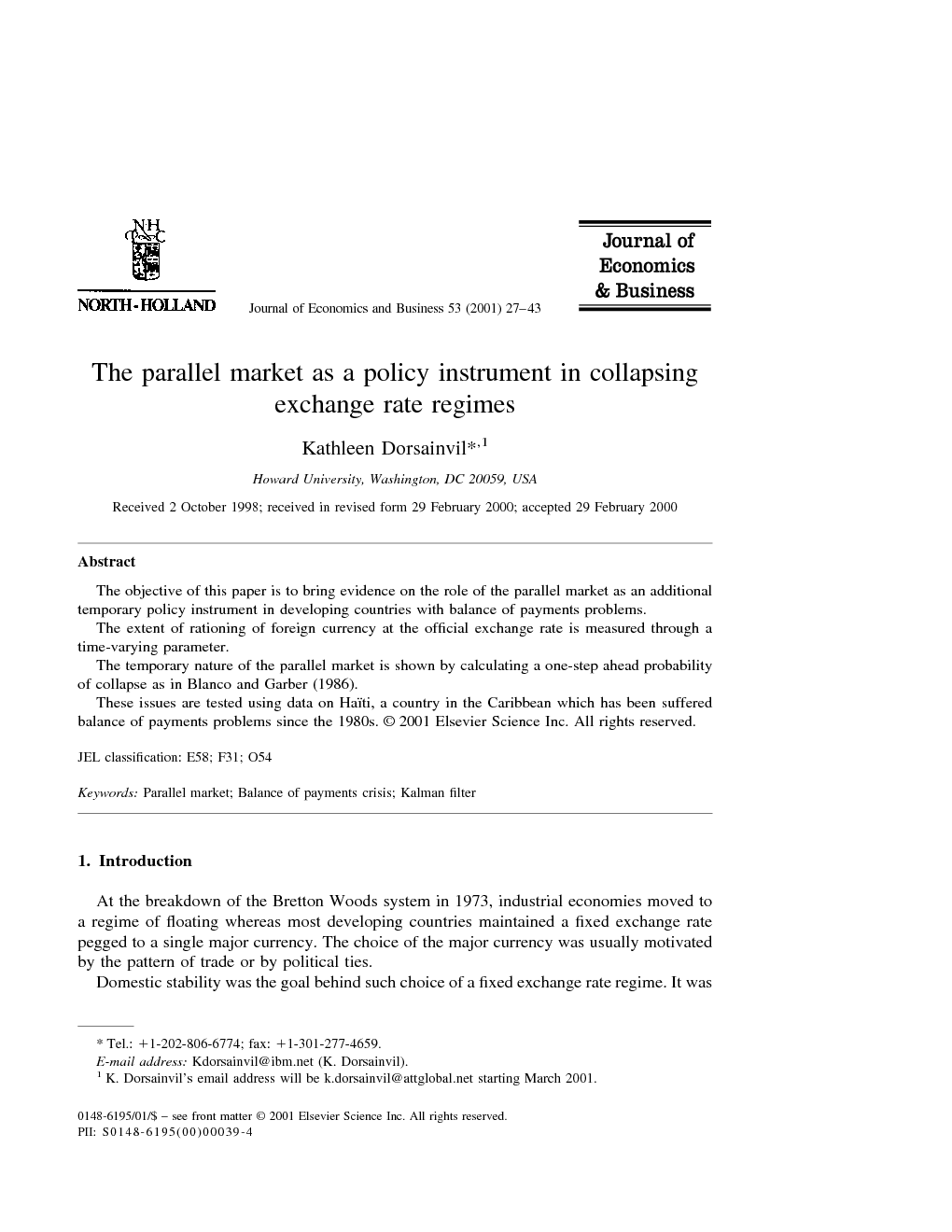 The objective of this paper is to bring evidence on the role of the parallel market as an additional temporary policy instrument in developing countries with balance of payments problems. The extent of rationing of foreign currency at the official exchange rate is measured through a time-varying parameter. The temporary nature of the parallel market is shown by calculating a one-step ahead probability of collapse as in Blanco and Garber (1986). These issues are tested using data on Haı̈ti, a country in the Caribbean which has been suffered balance of payments problems since the 1980s.

At the breakdown of the Bretton Woods system in 1973, industrial economies moved to a regime of floating whereas most developing countries maintained a fixed exchange rate pegged to a single major currency. The choice of the major currency was usually motivated by the pattern of trade or by political ties. Domestic stability was the goal behind such choice of a fixed exchange rate regime. It was thought at that time that it was the best way to reduce risks inherent to external shocks from abroad and to increase credibility specially with regard to the level of development of the financial system of these developing countries. One drawback from such choice was its interference with the pursuit of domestic objectives. Indeed such an exchange rate regime constrained these countries into fiscal and monetary discipline that most were unable to sustain and which culminated in the debt crisis of the early 80s. Sachs (1989) for instance has provided an analysis of the debt crisis with special emphasis on eight countries located in Latin America, the Middle East and East Asia. Overvalued exchange rate policy was one evidence mentioned for the origin of the crisis for all the countries surveyed. Sachs’ study also revealed striking differences among countries along trade orientation of policy choice to alleviate the crisis. Inward-oriented countries, mostly from Latin America, allowed the exchange rate to remain overvalued for a significant period of time. Fear of the uncertainty associated with a flexible exchange regime, and of political instability that changes might bring, were the reasons put forward by Bird (1990) and Aldcroft and Olivier (1998) respectively to explain the choice to keep an overvalued exchange rate. With no corrective measure in place, overvaluation would have brought these economies into crisis, an issue which is well established by the contribution of the “First-generation models” of currency crises developed by Salant and Henderson (1978), extended by Krugman (1979) and Flood and Garber (1984) notably. Exchange controls were put in place as a mean to delay the crisis, and a considerable parallel market for foreign exchange developed. There were costs associated with the presence of exchange controls. Misallocation of resource, terms of trade deterioration, implicit tax on exports, and loss of seignorage revenue are some of the negative effects reported by Nowak 1984 and Greenwood and Kimbrough 1987, and Pinto (1991) notably. Wyplosz 1986, Gros 1987 and Bacchetta 1990, and Dooley (1996) among others have pointed out the temporary nature of controls, a tool to keep the system viable a little longer. Dorsainvil (2000a), however, made the observation that in developing countries where balance of payments crises are a recurrent problem, controls have been in place for several years and devaluation of the type predicted by this literature on currency crises has not been observed. Her explanation is that the parallel market which emerges as a result of exchange controls is an additional instrument used by policymakers to weather the crisis. A similar argument was made by Bahmani-Oskooee, and Shiva (1998) in their study of the Iranian economy from 1959 to 1990.1 In her study, Dorsainvil quantifies the use of this additional instrument by deriving a rationing parameter of foreign currency at the official exchange rate. This parameter expresses the extent of tolerance of the parallel market by policymakers of these countries. She makes, however, the restrictive assumption that rationing was constant over the period. This paper expands this previous work by allowing the policymakers, at each point in time, to reevaluate their allocation of foreign currency to economic agents contingent on the new economic environment. That is, this paper allows for a time-varying rationing parameter. The parallel market is explicitly modeled by using the interaction between stock and flow equilibrium for exchange rate determination which has been developed by Dornbusch and Fischer 1980 and Rodriguez 1980 and applied to the parallel market by de Macedo (1982) among others. The question of the parallel market as an engine for the sustainability of the system is also addressed by deriving the probability of collapse at each point in time, as in Blanco and Garber (1986). These issues accord with events in Haı̈ti, a country in the Caribbean which has been suffering balance of payments problems since the 1980s and where the parallel market played a crucial role from 1983 to 1991 when policymakers of that country moved the economy to floating. The results show that rationing has been severe in the Haı̈tian economy over the period studied. They also show the temporary nature of the parallel market as a policy instrument to avoid collapse. The remainder of the paper is divided into three sections. Section 2 presents the model. Empirical results and probability of collapse of the regime are discussed in Section 3. Concluding remarks are contained in Section 4.

This paper brings empirical evidence for the role of the parallel market as an additional policy instrument to avoid collapse of economies with balance of payments problems. This additional instrument is of a temporary nature as the exchange controls from which it derives. This was shown by the calculation of the one-period ahead probability of collapse of the system. It was around 90% in the 1990s for the Haı̈tian economy—used for the empirical part of this paper. Another interesting result is the presence of currency substitution in that economy, a result which has not been empirically established yet for Haı̈ti. When all policy instruments are exhausted and the system becomes unsustainable, policymakers resort to a regime change. In the case of the Haı̈tian economy, the economy was moved to floating. Haı̈tian policymakers could have chosen to devaluate the official exchange rate, or move the economy to a crawling peg. Both options did not have much appeal because of their implications of fiscal, monetary and, trade discipline to which Haı̈tian policymakers could not commit—not to mention they were suffering from a lack of credibility in the eyes of economic agents. Higher inflation rates and loss of output growth have been observed since the implementation of this new exchange rate policy in Haı̈ti. The outcome of these observations is the question of the benefits of this regime change compared to their costs. I plan to tackle that question in a subsequent paper.