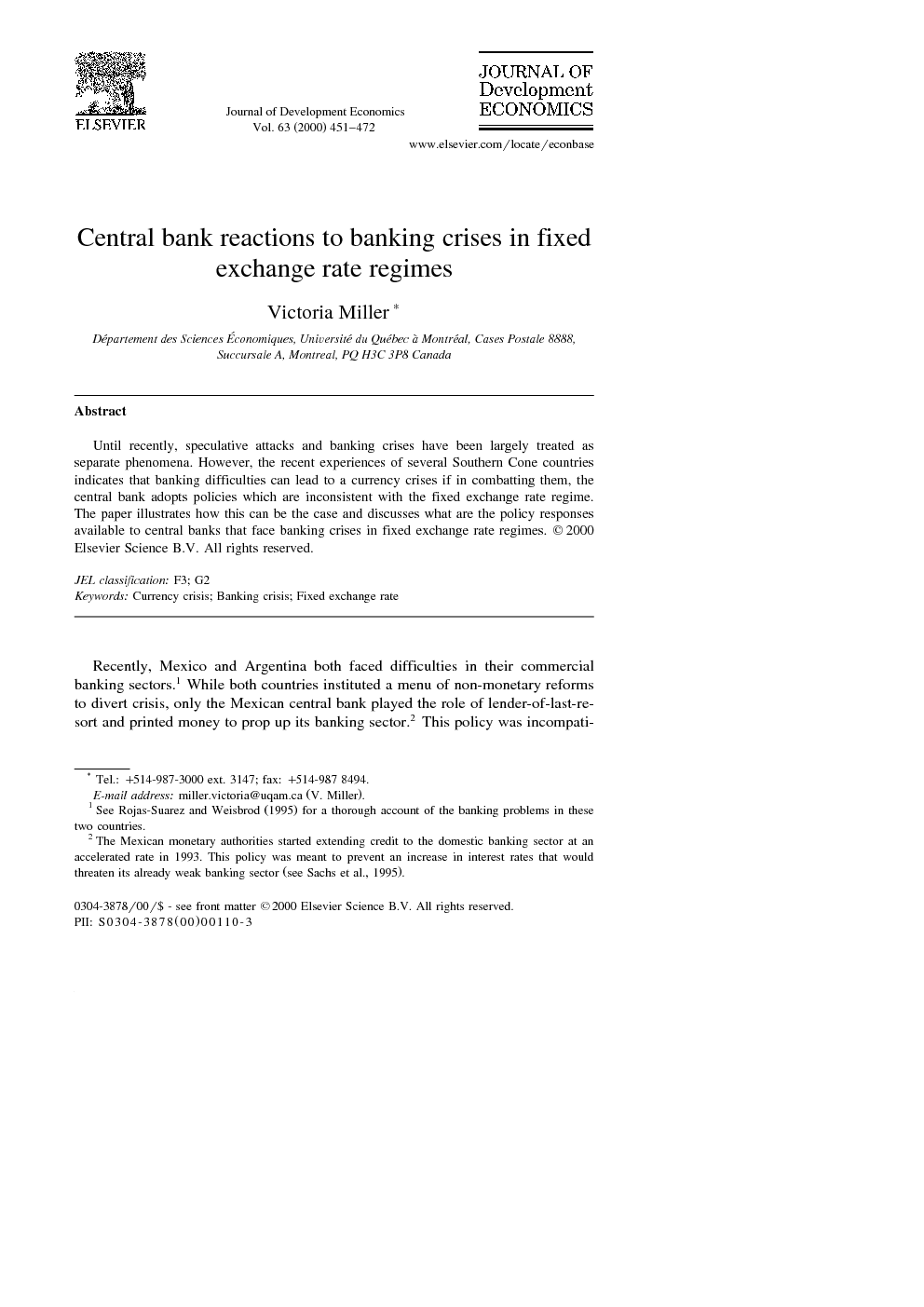 Until recently, speculative attacks and banking crises have been largely treated as separate phenomena. However, the recent experiences of several Southern Cone countries indicates that banking difficulties can lead to a currency crises if in combatting them, the central bank adopts policies which are inconsistent with the fixed exchange rate regime. The paper illustrates how this can be the case and discusses what are the policy responses available to central banks that face banking crises in fixed exchange rate regimes.

Recently, Mexico and Argentina both faced difficulties in their commercial banking sectors.1 While both countries instituted a menu of non-monetary reforms to divert crisis, only the Mexican central bank played the role of lender-of-last-resort and printed money to prop up its banking sector.2 This policy was incompatible with the pegged exchange rate and contributed to the speculative attack on the Mexican peso in early 1995.3 As Argentina remained committed to its currency peg and abstained from money creation, the Argentine peso remained unscathed.4 and 5 Thus, the different policy responses of the central banks of Mexico and Argentina to their respective banking problems had different implications for the viability of their exchange rate regimes. The present paper studies the responses available to central banks confronting rational bank runs in fixed exchange rate regimes. While an overhaul of the banking system must be undertaken in the medium- to long-run, in the short-run, a central bank faced with bank runs has two policy options available to it. Assuming that recourse to non-monetary measures are not sufficient for crisis resolution, a central bank can either do nothing and allow banks to close their doors; or print money to prevent an interruption of cash payments. While in the former case economic activity will be interrupted, in the latter, there is a risk of speculative attack and loss of monetary credibility. The optimal policy response to a banking crisis will therefore take into account the costs of the different alternatives, which will depend on economic and political factors. By studying how central bank reactions to banking crises can give rise to speculative attacks, the paper helps to further our understanding of the potential linkages between these two types of crises. While these two types of crises have received much theoretical6 and empirical attention, they have been largely treated as independent phenomena.7 However, the recent experiences of several southern cone countries (i.e., Chile 1981–1982, Venezuela 1994, and Mexico 1994–95) suggest that banking crises, or more appropriately, the government's handling of such crises, may contribute to balance-of-payments difficulties. This would suggest an important complementarity between bank solvency and currency stability.8 The remainder of the paper is organized as follows. Section 1 contains the model that is used to illustrate the alternative options available to policy makers facing bank problems in fixed exchange rate regimes. There the dynamics of a commercial banking crisis are mapped out under two scenarios: in one, the central bank does nothing while in the other it prints money to prevent banks from closing their doors. It is shown that in steady-state, interest rates will be higher in both scenarios. However, in the latter case, international reserves will be lower and the fixed exchange rate regime may have collapsed. Section 2 contains the welfare analysis in which the optimal response to a banking crisis is shown to be a function of economic and political factors. In Section 3, the responses of the Mexican and Argentine central banks to their respective 1994 bank difficulties are discussed within the context of the welfare analysis. Finally, Section 4 concludes.

The literature on exchange rate and banking crises is now plentiful. While much theoretical and empirical research has been done on each type of crisis, very little has been said about how one can influence the other. However, as the recent experiences of several southern cone countries illustrate, there are potentially important linkages between the two types of crises that should be considered. The present paper has attempted to deepen our understanding of these linkages. It was shown that if recourse to non-monetary measures is not sufficient, then a central bank facing a banking crisis in a fixed exchange rate regime has two policy options available to it in the short-run: either it can do nothing and allow cash payments to be restricted or print money and risk a devaluation of its currency. While economic activity will be interrupted in the former, in the latter there will be a loss of credibility and price instability. The optimal policy response will therefore weigh the costs of these two options and be a function of economic and political factors. The analysis is applicable to the 1994–1995 experiences of Mexico and Argentina. During that period, both countries faced imminent crisis in their domestic banking sectors. Argentina remained committed to its currency board system while Mexico provided liquidity to circumvent the crisis. While Mexico's policies prevented a liquidity crisis, the cost of providing that excess liquidity was currency instability and a speculative attack on the Mexican peso in early 1995. The policy adopted by Argentina on the other hand, left the Argentine peso unscathed. While both countries ultimately sought aid from an international lender-of-last-resort, Argentina's credibility increased while Mexico's was impaired. Based on their respective policies, it seems that Mexican policy-makers found the threat of a cash payments restriction to be more costly than a devaluation while the opposite was true of policy-makers in Argentina. This paper sought to illustrate how the monetisation of bank difficulties could cause a currency peg to be compromised. As the bank difficulties in the paper took the form of a run, the government's loss function was assumed to be unknown to agents (i.e., if a bailout were anticipated then no run would have occurred). However, it is reasonable that expected government behaviour could affect insolvency fears and therefore, the probability that a bank run occurs. Indeed, while Obstfeld (1994) and others have discussed how bank weakness could affect expected central bank reactions to a speculative attack, to our knowledge, nobody has addressed how a fixed exchange rate could affect expected policy responses to a bank run and thus the probability that a run occurs. This latter relationship seems to be a worthy direction for future research.