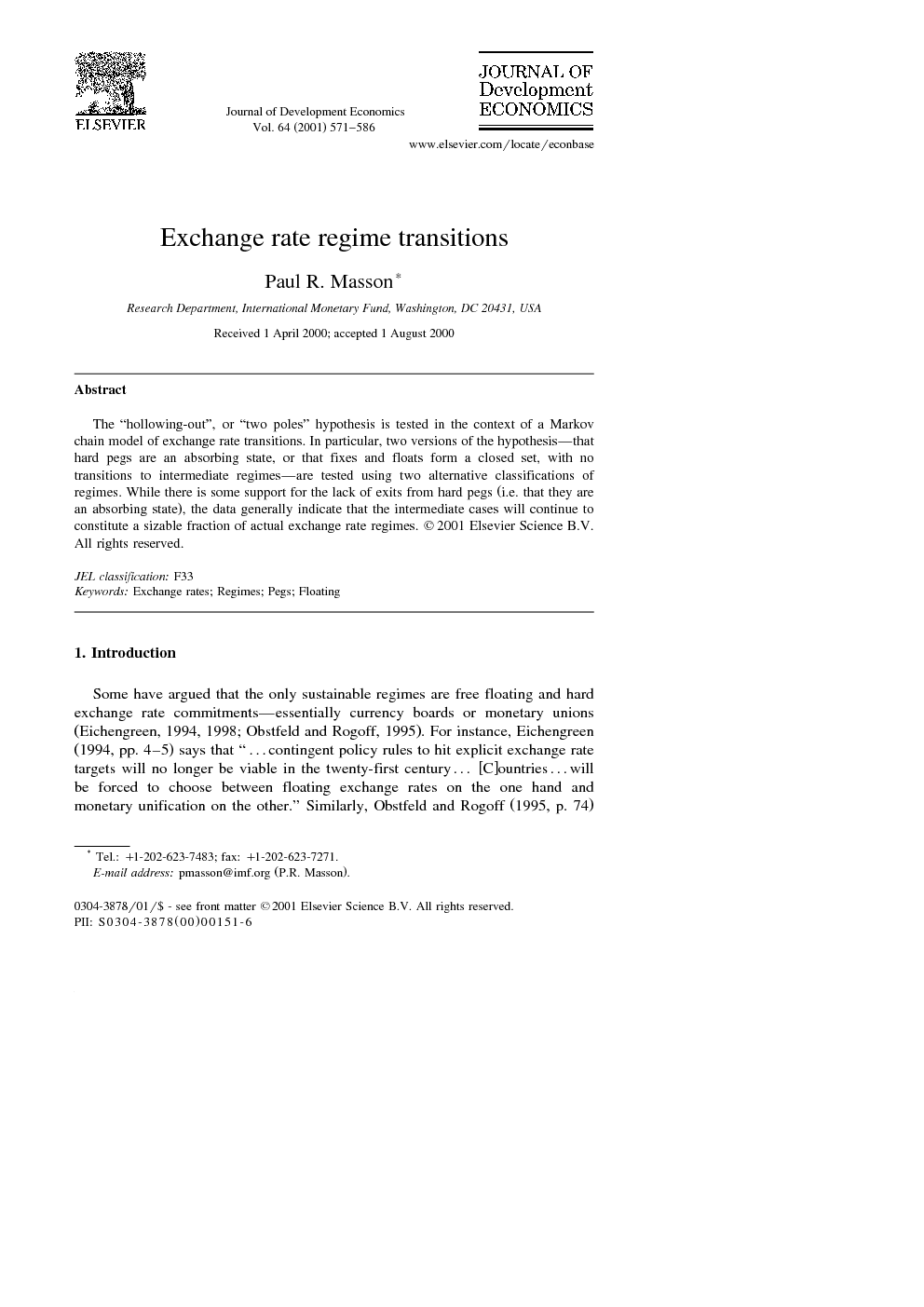 The “hollowing-out”, or “two poles” hypothesis is tested in the context of a Markov chain model of exchange rate transitions. In particular, two versions of the hypothesis—that hard pegs are an absorbing state, or that fixes and floats form a closed set, with no transitions to intermediate regimes—are tested using two alternative classifications of regimes. While there is some support for the lack of exits from hard pegs (i.e. that they are an absorbing state), the data generally indicate that the intermediate cases will continue to constitute a sizable fraction of actual exchange rate regimes.

Historical evidence of regime transitions gives an indication of whether the trend towards the poles of exchange rate regimes, which some commentators have divined in the 1990s, will eventually lead to the disappearance of intermediate regimes. Projecting transitions into the future does not produce such a hollowing out. The hypothesis that there are only transitions toward the two poles, and not toward the middle, can generally be overwhelmingly rejected by data samples based on the widest possible set of countries. We have guarded against the danger of arbitrary classification of regimes by using two different data sets that depart from the official classification. Both data sets suggest that a range of exchange rate regimes will be present for the foreseeable future, and will constitute roughly a quarter to a third of all regimes, though the Ghosh et al. data for the 1990s cannot reject the hypothesis of fixed rates as absorbing state. The Levy Yeyati–Sturznegger data set, which is based on what governments do, not what they say, overwhelmingly rejects all variants of hollowing out. Of course, using historical data for transitions raises the danger that we are using data which are no longer relevant, or that the trends in capital mobility, which have affected some countries (emerging markets) will spread to others in the future, producing an irreversible movement toward the poles. We therefore also look at a restricted set of countries, those classified as emerging markets, in the 1990s. Results for the Ghosh et al. data set suggest that eventually fixed rates will prevail as the single exchange rate regime for these countries. This result emerges because of the small number of hard pegs and the short time period, leading to the absence of any exits from this regime. As mentioned in the Introduction, there are earlier examples of breakdowns of both monetary unions and currency boards, and this experience is still relevant to an environment with higher capital mobility (capital mobility can be expected to make all exchange rate commitments, including fixes, more fragile). The starkly different implications of the Levy Yeyati–Sturzenegger data set, which strongly rejects the two forms of hollowing-out hypothesis for even this restricted set of countries, also throw doubt on hard pegs as the solution for all countries. The evidence of transitions thus suggests that intermediate regimes will continue to constitute an important fraction of actual exchange rate regimes.