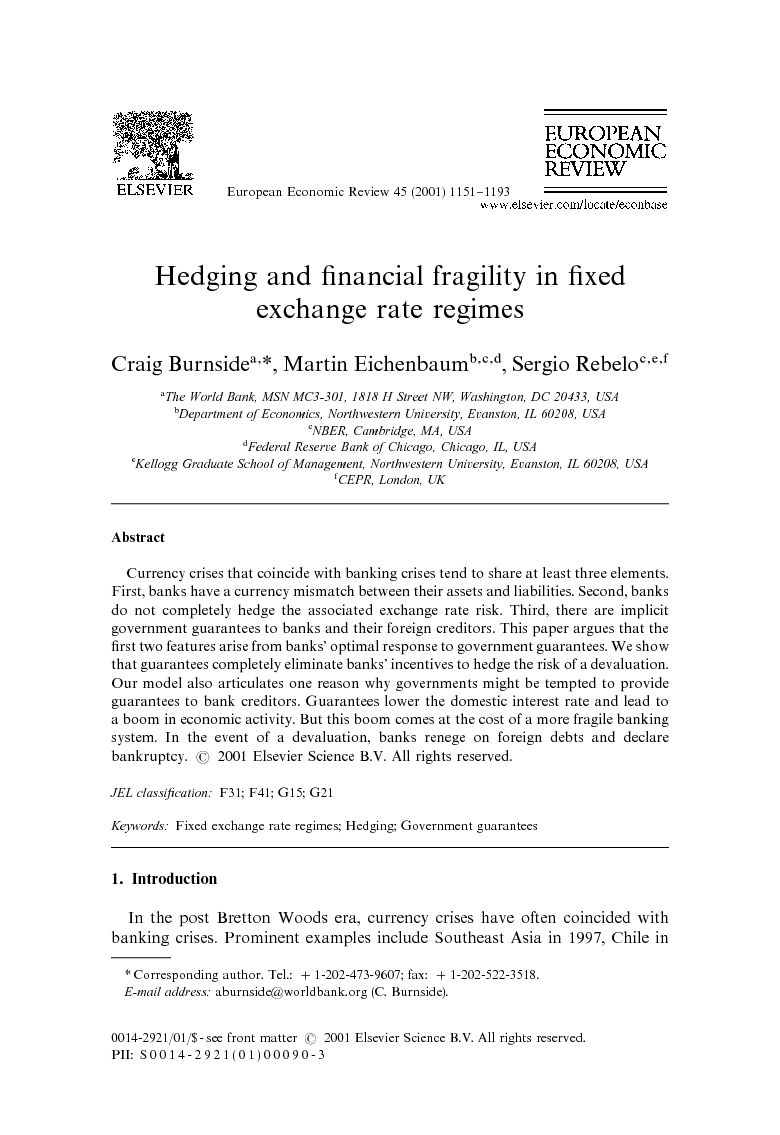 Currency crises that coincide with banking crises tend to share at least three elements. First, banks have a currency mismatch between their assets and liabilities. Second, banks do not completely hedge the associated exchange rate risk. Third, there are implicit government guarantees to banks and their foreign creditors. This paper argues that the first two features arise from banks’ optimal response to government guarantees. We show that guarantees completely eliminate banks’ incentives to hedge the risk of a devaluation. Our model also articulates one reason why governments might be tempted to provide guarantees to bank creditors. Guarantees lower the domestic interest rate and lead to a boom in economic activity. But this boom comes at the cost of a more fragile banking system. In the event of a devaluation, banks renege on foreign debts and declare bankruptcy.

In the post Bretton Woods era, currency crises have often coincided with banking crises. Prominent examples include Southeast Asia in 1997, Chile in 1982, Mexico in 1994, and Sweden and Finland in 1992.1 Three key features of such ‘twin’ crises are (i) banks have a currency mismatch between their assets and liabilities, (ii) banks do not completely hedge the associated exchange rate risk, and (iii) the government makes implicit guarantees to banks and their foreign creditors.2 This paper argues that the first two features arise from banks’ optimal response to government guarantees. The fact that banks are exposed to unhedged currency risks lies at the core of competing theories of currency crises. In some cases, it is simply a maintained assumption of the analysis. See for example, Aghion et al. (2000), Chang and Velasco (1999), and Krugman (1999). In other cases it is assumed that, to a first approximation, banks in emerging markets must borrow in units of foreign currency and simply cannot hedge the resulting exchange rate risk (see Eichengreen and Hausmann, 2000). This paper argues that banks choose to expose themselves to exchange rate risk. In a world with government guarantees, it is optimal for banks to have an unhedged currency mismatch between their assets and liabilities. When a devaluation occurs, banks simply renege on foreign debt and go bankrupt. To minimize the value of the assets that they surrender in bankruptcy, banks may actually find it optimal to magnify their exchange rate exposure by selling dollars forward and lose money in the forward market when there is a devaluation. Given the central role that government guarantees play in our model, it is useful to provide intuition for how they affect the optimal hedging strategies of banks. The government guarantees that foreign creditors will be repaid in full if there is a devaluation and banks default on their debt. Suppose a bank contemplates hedging foreign exchange rate risk via forward contracts. The hedging profits that are realized when a devaluation occurs and the bank declares bankruptcy are seized by the government. So the bank assigns zero value to them. But these contracts generate losses when there is no devaluation and the bank does not go bankrupt. It follows that banks have no incentive to enter forward contracts that generate positive payoffs when there is a devaluation. Banks will therefore not be perfectly hedged, and will go bankrupt when a devaluation occurs. To the extent that they have any assets in that state of the world, these will be seized by the government. Hence banks ought to minimize their asset holdings in bankruptcy states of the world. A simple strategy for doing this is to sell dollars forward, which generates profits in the no devaluation state and losses in the devaluation state. In addition to explaining the mismatch between banks’ assets and liabilities, our analysis has an important policy implication: absent regulation of banks’ hedging behavior, capital requirements have no effect on the frequency of bank bankruptcies after a devaluation. Banks undo the effects of these requirements by enhancing their exposure to exchange rate risk via forward markets. If government guarantees lead to increased risk in the banking system, why are they so prevalent? One possibility is that guarantees lower domestic interest rates and lead to a boom in economic activity, a temptation government officials may find impossible to resist. To formalize the idea that guarantees lead to increased economic activity we embed our model of banking into a general equilibrium model. The key feature of our model is that firms in the output sector must borrow working capital from banks to pay labor. Government guarantees to banks’ foreign creditors act like a subsidy to the banking industry, thereby lowering the domestic interest rate and the cost of working capital. This reduction in costs leads to higher aggregate employment, output and real wages. Our paper is organized as follows. In Section 2 we provide empirical motivation for our analysis. Section 3 lays out a competitive banking model. Section 4 studies banks’ hedging decisions in a setting where the level of bank loans is pre-determined. In Section 5 we characterize the equilibrium of the banking industry when lending and hedging decisions are made simultaneously. Section 6 discusses the effects of introducing capital requirements. In Section 7 we study a version of the model where banks lend to domestic firms in dollars but face uncertainty with respect to loan repayment rates in the event of a devaluation. In Section 8 we embed our banking model in a general equilibrium environment and study the macroeconomic effects of government guarantees and devaluations. Section 9 contains concluding remarks.

This paper analyzed the connection between exchange rate devaluations and banks’ hedging behavior. We argued that the presence of government guarantees to banks’ creditors completely eliminates banks’ incentives to hedge exchange rate risk. So while the policy lowers the interest rate on bank loans and raises aggregate output, it comes at a cost. The banking system becomes fragile. In the event of a devaluation, banks renege on their debt and go bankrupt. We conclude by discussing some shortcomings of our analysis. To preserve the analytical tractability of our model we made several important simplifying assumptions. First, we assumed that there is no uncertainty about the exchange rate path once a devaluation occurs: the currency depreciates at a constant rate per unit of time. Aside from the counterfactual nature of this assumption, it implies that economies with and without guarantees look identical once the devaluation occurs, at least with respect to the variables we solved for. This would not be the case if there was ongoing exchange rate uncertainty. Second, we assumed that devaluations are exogenous events. In Burnside et al. (2000b) we endogenize the probability of devaluations. In particular we show that the presence of government guarantees and the associated fiscal implications of bank bailouts lead to the possibility of self-fulfilling currency crises.23 Finally, we did not formally address the question of why governments often provide implicit guarantees to banks. We suspect that the answer is related to our model's prediction that such policies generate booms in aggregate activity. Understanding why policymakers focus on this benefit (as well as others not discussed in this paper), rather than the costs is an important task that will no doubt involve political economy type considerations.