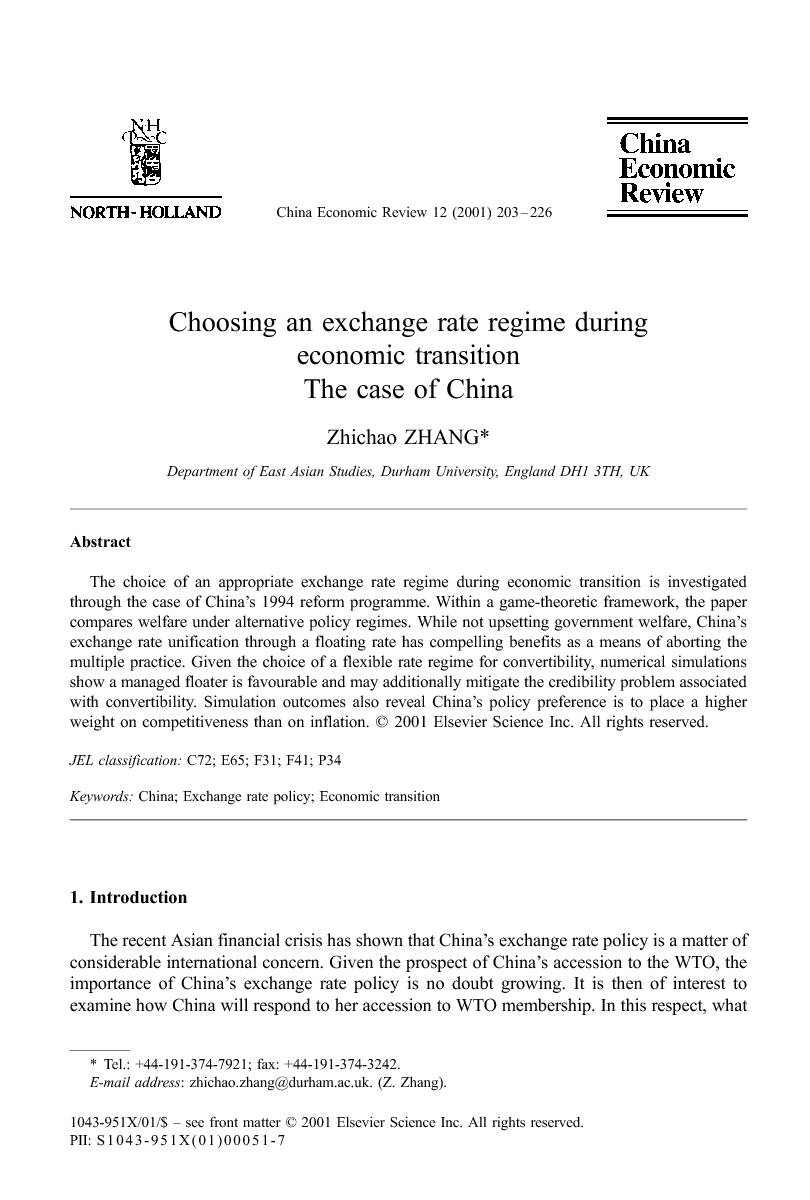 The choice of an appropriate exchange rate regime during economic transition is investigated through the case of China's 1994 reform programme. Within a game-theoretic framework, the paper compares welfare under alternative policy regimes. While not upsetting government welfare, China's exchange rate unification through a floating rate has compelling benefits as a means of aborting the multiple practice. Given the choice of a flexible rate regime for convertibility, numerical simulations show a managed floater is favourable and may additionally mitigate the credibility problem associated with convertibility. Simulation outcomes also reveal China's policy preference is to place a higher weight on competitiveness than on inflation.

This paper develops a model of China's reform of her exchange rate arrangement in a game-theoretic framework. The interactions between government and enterprises are captured as a noncooperative Nash game. The comparison of welfare under alternative exchange rate regimes forms the basis for explaining the Chinese choice of regime. It is found that the regime shift had already taken place before the 1994 reform package was launched. In the presence of the swap market, when the official rate is flexible while the swap rate is fixed, or when both rates are flexible, the welfare consequences involved are the same as those under a unified floating rate regime. China's exchange rate unification through a floating rate regime therefore does not upset government welfare but has compelling benefits resulting from the removal of multiple practice. Numerical simulations show that, given the parameters of the Chinese economy, a flexible rate regime is favourable since it causes less loss to the government than a fixed rate regime. Furthermore, in moving to convertibility, a flexible rate regime is a sensible choice for maintaining the economy's competitiveness. Given that a systemic worsening of competitiveness would undermine the balance of payments position, ultimately leading to the government aborting convertibility, choosing a flexible rate regime has particular relevance for the credibility issue. In the model set-up, China's choice of a managed floating rate reveals that it places a relatively higher weight on competitiveness than on inflation. This is a very important attribute of China's exchange rate policy from which profound implications may flow. For one thing, this means there is a strong supply orientation in China's exchange rate decision that calls for attention. It also provides a useful indicator for possible changes in China's exchange rate when medium to long-run competitiveness of Chinese goods changes.