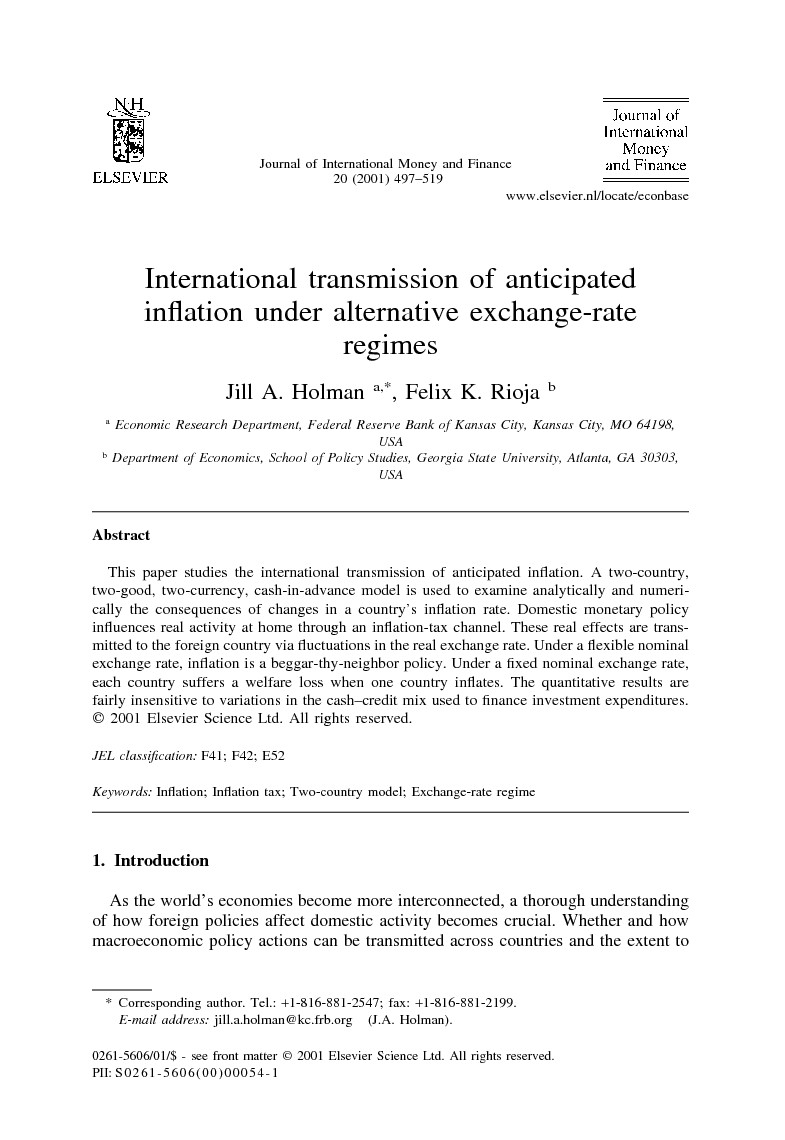 This paper studies the international transmission of anticipated inflation. A two-country, two-good, two-currency, cash-in-advance model is used to examine analytically and numerically the consequences of changes in a country's inflation rate. Domestic monetary policy influences real activity at home through an inflation-tax channel. These real effects are transmitted to the foreign country via fluctuations in the real exchange rate. Under a flexible nominal exchange rate, inflation is a beggar-thy-neighbor policy. Under a fixed nominal exchange rate, each country suffers a welfare loss when one country inflates. The quantitative results are fairly insensitive to variations in the cash–credit mix used to finance investment expenditures.

As the world's economies become more interconnected, a thorough understanding of how foreign policies affect domestic activity becomes crucial. Whether and how macroeconomic policy actions can be transmitted across countries and the extent to which a flexible exchange rate may insulate an economy from foreign disturbances are important issues for today's monetary policymakers. This paper addresses the macroeconomic connections between countries by highlighting the role of anticipated inflation in the international transmission of monetary-policy fluctuations. A two-country, two-good, two-factor, two-currency model is developed to study the long-run consequences of monetary policy in an open economy. In the model, money is nonneutral because capital accumulation and goods purchases (but not labor purchases) must be financed with money holdings. Domestically, an increase in expected inflation raises the rate at which capital and labor incomes are taxed, altering the steady-state capital and labor stocks. The effects of the inflation tax are transmitted to the domestic country's trading partner. The international inflation-tax transmission channel depends on the substitutability of foreign goods for domestic goods and on the nominal exchange-rate regime. The long-run implications of changes in a country's inflation-tax rate are examined analytically and numerically to provide both qualitative and quantitative predictions from the model. Studies on the transmission of monetary-policy fluctuations across countries are part of a broad literature concerning monetary nonneutralities. Some authors working in this area view the real effects of money as arising from nominal rigidities. Svensson and van Wijnbergen (1989), Obstfeld and Rogoff (1994) and Stockman and Ohanian (1995) emphasize the role of price rigidity in the international transmission mechanism. Fender and Yip (1994) incorporate wage rigidity in their static, two-country model of monetary transmission. Other authors contend that monetary nonneutralities arise because of differences in the timing of information and transactions. Using closed-economy models, Lucas (1990) and Fuerst (1992) study the link between money and real activity when incomplete information about monetary injections produces liquidity effects. Schlagenhauf and Wrase (1995) and Ho (1993) emphasize the role of liquidity effects in the determination of exchange rates and the international transmission of disturbances between countries. Another group of authors argues that money is nonneutral because inflation acts as a differential tax on market goods versus nonmarket goods. Most studies on the inflation tax use a closed-economy setting.1 Notable exceptions include Stockman (1985), Roldos (1992) and Kimbrough (1992). Stockman (1985) develops a two-good, three-factor, small-open-economy model where the monetary-growth rate determines the sectoral allocation of resources and the pattern of trade. Roldos (1992) modifies Stockman's (1985) model by allowing for factor specificity in production. The small-open-economy assumption invoked in the Stockman and Roldos studies permits only a limited discussion of the international transmission of inflation taxes.2 Kimbrough (1992) bridges the gap between the inflation-tax literature and research on the international transmission of monetary policy. He develops a Ricardian continuum-of-goods model with cash-in-advance (CIA) constraints and variable labor supply to study the effects of inflation in a two-country world. In Kimbrough's model, where goods must be purchased with currency, an increase in the inflation rate in one country influences both countries' relative wage rates and employment levels. Thus, inflation alters the relative price of home and foreign goods, in turn altering patterns of specialization and trade. Kimbrough, however, addresses neither capital accumulation nor exchange-rate regimes, factors others identify as playing an important role in the international transmission of monetary policy.3 In this paper, we generalize several aspects of the existing literature on the effects of an inflation tax in an open economy. The paper abandons the small-country assumption made by Stockman (1985) and Roldos (1992), and instead considers a two-country framework. It addresses qualitatively and quantitatively the importance of capital accumulation, endogenous labor supply, and alternative exchange-rate regimes in the domestic and international monetary-transmission mechanisms. It also examines the implications of varying the cash–credit mix used to finance investment expenditures. Finally, the paper analyzes the welfare cost of inflation taxes across countries and exchange-rate policies. The paper is organized as follows. Section 2 develops the model, while Section 3 characterizes the steady-state equilibrium. Section 4 discusses the effects of the inflation tax on the labor-supply decision. Section 5 describes the correlation between inflation and capital accumulation and the international-transmission mechanism. Section 6 examines numerically the domestic and international consequences of changes in a country's inflation-tax rate. Section 7 verifies the robustness of the results to the specification of the CIA constraints. The final section briefly concludes.

This paper studies the long-run effects of monetary policy on domestic and international real economic activity by emphasizing the role of inflation as a tax. The analysis extends the existing literature on inflation taxes in open economies in several ways. First, it replaces the small-country framework employed in most other studies with a two-country framework. Second, it investigates both analytically and numerically the consequences of widening inflation-tax differentials across countries. Third, it emphasizes the endogenous responses of the factors of production to changes in inflation-tax rates at home and abroad. Fourth, it addresses the role of the nominal exchange-rate regime in the international inflation-tax transmission mechanism. Fifth, it examines qualitatively and quantitatively the implications of varying the cash–credit mix used to finance investment expenditures. Finally, the paper analyzes the welfare costs of inflation taxes across countries and exchange-rate policies. The main lesson to be taken from the theoretical analysis and the numerical exercises is that inflation taxes have important long-run implications for both the country of origin and its trading partner. Domestically, an increase in expected inflation reduces steady-state investment expenditures, hours worked, and output. The international transmission mechanism depends on the substitutability of home and foreign goods in consumption and the nominal exchange-rate regime. A flexible exchange-rate system will not insulate a country from inflation taxes abroad. When the nominal exchange rate is flexible, foreign inflation taxes alter the home country's consumption of goods but not the home country's production decision. By contrast, when the nominal exchange rate is fixed, foreign inflation reduces the home country's level of output. Hence, in the fixed exchange-rate case, an increase in the foreign money-growth rate acts as a negative shock to the world's supply of goods. If the home and foreign countries are identical, they will bear the burden of the inflation tax equally. In the theoretical model, leisure is a credit good, while capital and consumption are cash goods. The numerical exercises reveal that the quantitative predictions of the model are fairly insensitive to alternative assumptions about the cash–credit mix used in transactions involving capital goods. Of course, inflation taxes have stronger effects the more cash is required to finance investment expenditures. However, even when capital goods are purchased on credit, an increase in a country's inflation rate still affects real activity both at home and abroad. Several interesting conclusions can be drawn from the welfare analysis. Under a flexible nominal exchange rate, a unilateral increase in a country's inflation rate is a beggar-thy-neighbor policy. Although worldwide welfare is reduced, inflation is a welfare-enhancing policy from the country of origin's perspective. Under a fixed nominal exchange rate, a country cannot increase its own welfare at the expense of its trading partner. The numerical analysis reveals that the home country is relatively better off when it ties its currency to the foreign currency when the foreign country inflates. The different welfare effects under the alternative exchange-rate policies suggest that this analysis may be useful in studying such topics as disputes over, and coordination of, monetary policies across countries. The results in this paper are subject to several caveats that could be addressed by subsequent research in this area. We briefly sketch a few ways that our analysis could be extended. In focusing on the long-run consequences of anticipated increases in inflation, the short-run dynamics are lost. However, an intuitively appealing view of the domestic and international transmission mechanisms is gained. Analyzing the transitional responses of the real variables in the two economies to changes in inflation-tax rates would be a worthwhile and significant extension. The analysis has abstracted from international financial markets. In the comparative steady-state exercises considered in the paper, there is no explicit role for asset markets as there is no uncertainty and the countries are identical ex ante. If we were to introduce uncertainty about changes in inflation-tax rates, this would provide motivation for trades in international financial assets, which may alter the results. Further motivation for asset trade could be provided by assuming that the two countries have different subjective probabilities about inflation-tax rates, different degrees of risk aversion, and/or different production functions. The introduction of international financial markets would allow agents to transfer resources over time by borrowing and lending. If we were to focus on the transitional dynamics from one steady state to the next, consideration of asset trades would be crucial in the flexible exchange-rate case. Without international markets for borrowing and lending, changes in the foreign inflation rate lead to periods in which consumption of the foreign good is high or low as the economies move to the new steady state. The ability to trade bonds internationally may permit the foreign country to finance its expenditures with external debt rather than automatically altering its consumption path in the face of higher inflation-tax rates.