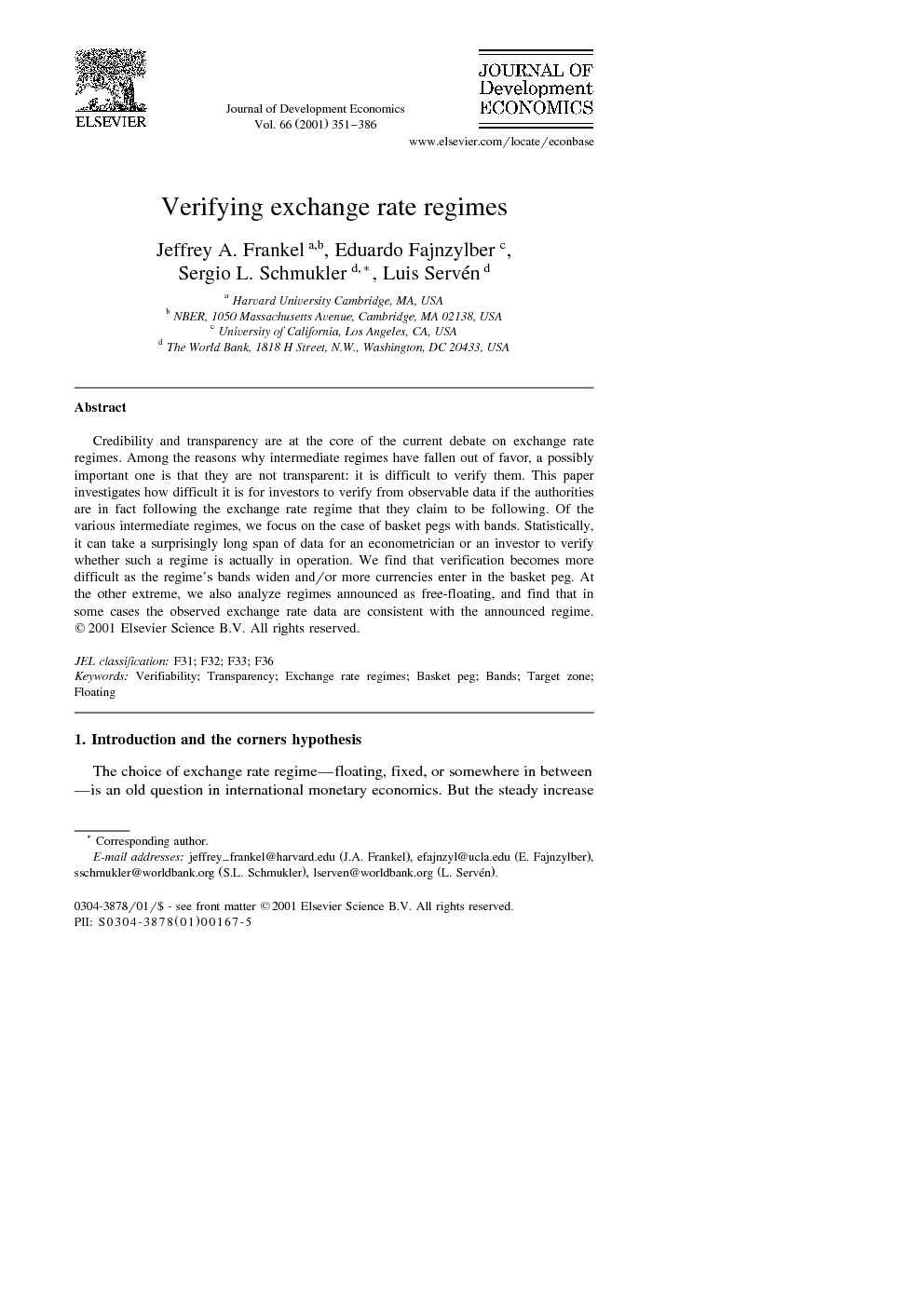 Credibility and transparency are at the core of the current debate on exchange rate regimes. Among the reasons why intermediate regimes have fallen out of favor, a possibly important one is that they are not transparent: it is difficult to verify them. This paper investigates how difficult it is for investors to verify from observable data if the authorities are in fact following the exchange rate regime that they claim to be following. Of the various intermediate regimes, we focus on the case of basket pegs with bands. Statistically, it can take a surprisingly long span of data for an econometrician or an investor to verify whether such a regime is actually in operation. We find that verification becomes more difficult as the regime's bands widen and/or more currencies enter in the basket peg. At the other extreme, we also analyze regimes announced as free-floating, and find that in some cases the observed exchange rate data are consistent with the announced regime.

The choice of exchange rate regime—floating, fixed, or somewhere in between—is an old question in international monetary economics. But the steady increase in magnitude and variability of international capital flows has complicated the question. This is particularly the case for the developing countries that in the 1990s became full-fledged participants in international financial markets. A major new element in the debate is the proposition that emerging market countries are, or should be, abandoning basket pegs, crawling pegs, bands, adjustable pegs, and various combinations of these. The currently fashionable view is that countries are being pushed to the “corners,” the extremes of either free floating or firm fixing. The intermediate regimes are said to be no longer viable. This proposition is variously called the hypothesis of the vanishing intermediate regime, the missing middle, or the corners solution. Its life history has gone from birth to conventional wisdom in a remarkably short period of time. The motivation of this paper is the observation that, as fashionable as this proposition has become, few of its proponents, if any, have offered an analytical rationale for it, let alone a fully worked out theoretical model. Our aim is to offer a possible theoretical rationale. We seek to introduce the notion of verifiability, and to suggest that a simple peg or a simple float may be more readily verifiable by market participants than a more complicated intermediate regime. Verifiability is a concrete instance of the more general principle of “transparency” that is so often invoked in recent discussions of the new international financial architecture but so seldom made precise.

The new conventional wisdom is that intermediate exchange rate regimes, such as baskets, crawls, and bands, are no longer viable. According to this proposition, countries are being pushed to the “corners,” the extremes of either free floating or firm fixing. We have argued that a theoretical rationale for this proposition is currently lacking; none of the candidates offered—the impossible trinity, the dangers of unhedged foreign liabilities, or government reluctance to abandon ship in time—is quite up to the job. We offered such a rationale, by introducing the notion of verifiability. By verifiability we mean the ability of a market participant to infer statistically from observed data that the exchange rate regime announced by the authority is in fact in operation. Verifiability is an instance of transparency, a means to credibility. Our point is that a simple regime such as a clear dollar peg, or even a free float, may be more verifiable by market participants than a complicated intermediate regime. In this way, simpler regimes could also contribute to reduce uncertainty, which in turn could affect consumption and investment decisions. In this paper, we have made a first attempt at assessing empirically the verifiability of various exchange rate regimes. We first focused on the verification of exchange rate bands, drawing from the experiences of Chile and Israel. In the case of Chile, when the band was relatively narrow and the peg involved only the dollar, verification is relatively easy to achieve. But from 1992 to 1999, when the band became wider and the peg involved additional currencies, our simple statistical procedures fail to achieve verification. In the case of Israel, whose basket involved five currencies, two of which were very strongly correlated, we only achieve verification in a period of relatively narrow band in which the central parity does not experience sharp realignments, and only when using a restricted specification involving a reduced number of currencies. In wider-band periods, and in narrow-band periods with frequent realignments, our procedures again fail to achieve verification of the regime. This is precisely the result we expected. On the whole, the results suggest that higher band width, as well as the adoption of multiple instead of simple basket pegs, and frequent parity realignments, all make more difficult the econometric verification of the announced regime. The finding that with data for Chile and Israel we fail to reject the announced weights for some particular periods seems to be an informative test. For the same time periods, we reject those weights when we replaced the peso and shekel by a randomly generated variable and by the Swiss franc. This means that for narrow bands we are able to verify the announced exchange rate regime. We also examined the verifiability of regimes self-declared as free-floating in several Latin American and East Asian countries in the 1990s—Brazil, Mexico, Peru, South Korea, and Thailand. We followed the same methodology used for bands, testing whether supposedly floating exchange rates are correlated with major exchange rates. Our tests do not show significant evidence against the hypothesis that the exchange rates of these countries are indeed floating, with the exception of Peru and part of the post-Tequila period in Mexico. In these cases, we find some evidence that the exchange rate is in fact moving along with some weighted combination of strong currencies. This appears to agree with the conclusions reached by other researchers and, partly, with the evidence obtained for exchange rate bands. In sum, in various cases we reject free-floating regimes, even when governments might not be intervening, perhaps due to cross-currency correlations reflecting common shocks. Whether these findings can be extended for long periods of free floating, after the high volatility in the aftermath of crises has vanished, is a question for future research. The analysis in the main text was complemented by means of Monte Carlo tests reported in Frankel et al. (2000a), assessing the effects of bandwidth and number of currencies in the basket on the time needed to verify exchange rate bands. On the whole, the results agree with the above findings. As expected, when the range of variability of the exchange rate is relatively large, the number of observations needed to verify the regime increases considerably with the width of the band. The number of observations needed to differentiate the crawling basket from a random variable in at least half of the samples is under 100 days when the band width is 2%, as it was for Chile from 1985 to 1987, but is over 500 days when the band width is 10%, as it was for Chile from 1992 to 1998. Regarding the role of the number of currencies in the basket, we find that moving from a single-currency parity to a three-currency basket increases the amount of data needed to distinguish the basket from a random currency by an extra year's worth of observations (assuming a 10% band, and again using the criterion of finding statistically significant weights at least half the time). If we are right that it is hard for a central bank to establish credibility for its proclaimed monetary regime without verifiability, then our results confirm that complicated combinations of baskets, crawls, and bands, are less likely to satisfy skeptical investors than are simpler regimes. We thus offer a possible and much-needed rationale for the hypothesis of the vanishing intermediate exchange rate regime.