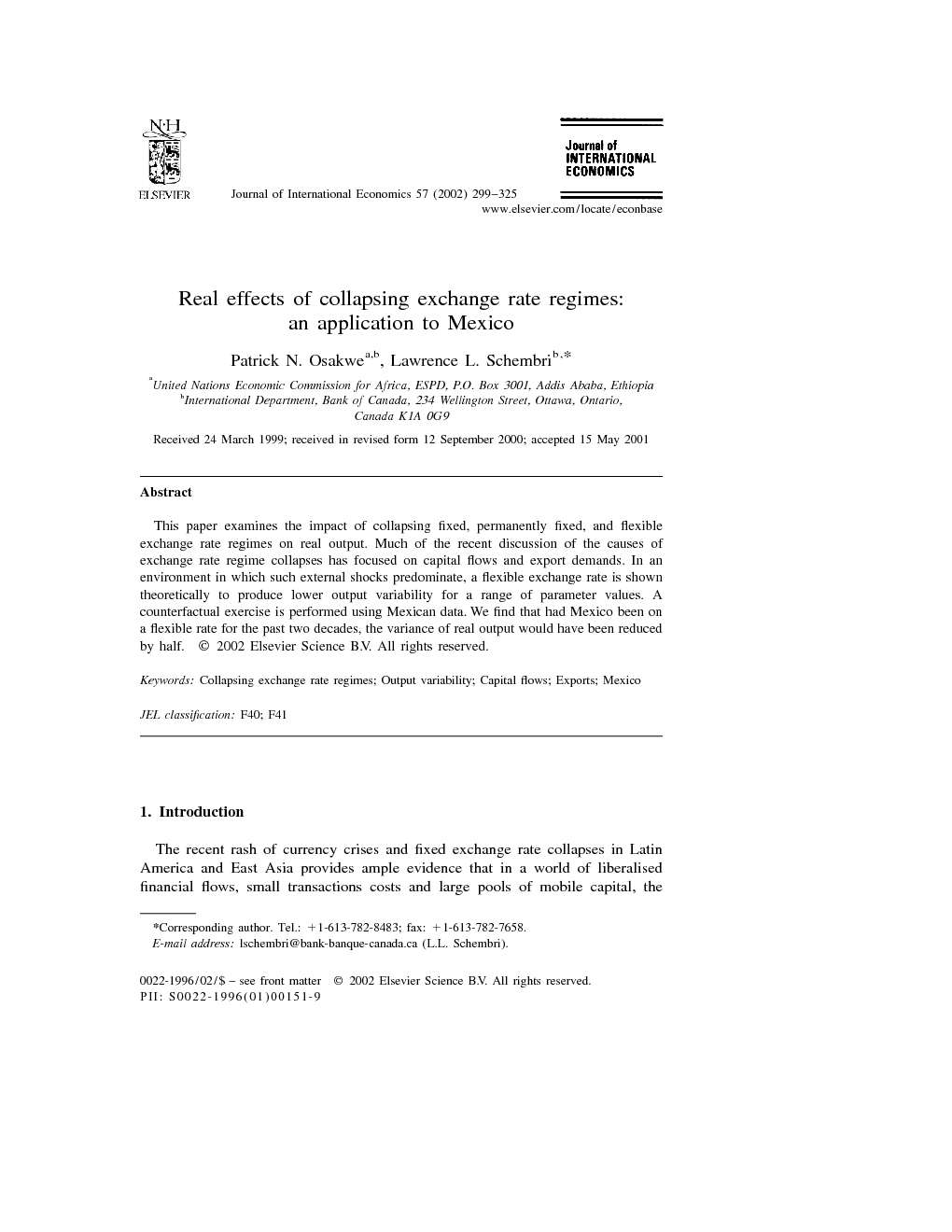 This paper examines the impact of collapsing fixed, permanently fixed, and flexible exchange rate regimes on real output. Much of the recent discussion of the causes of exchange rate regime collapses has focused on capital flows and export demands. In an environment in which such external shocks predominate, a flexible exchange rate is shown theoretically to produce lower output variability for a range of parameter values. A counterfactual exercise is performed using Mexican data. We find that had Mexico been on a flexible rate for the past two decades, the variance of real output would have been reduced by half.

The recent rash of currency crises and fixed exchange rate collapses in Latin America and East Asia provides ample evidence that in a world of liberalised financial flows, small transactions costs and large pools of mobile capital, the typical fixed or pegged exchange rate regime is extremely difficult to sustain.1 These crises have had significant real costs in terms of lost output and employment because of tighter monetary and fiscal policies and because of widespread financial distress due to the halt in capital inflows and higher debt payments.2 Our primary purpose in this paper is to investigate the impact of collapsing fixed exchange rate regimes on the variability of output. In addition, we examine the crucial policy decision facing emerging-market countries which are vulnerable to such crises: namely choosing an alternative exchange rate regime to avoid such disruptions in the future.3 Currency boards or common currencies are often put forward as appropriate alternative regimes (for example, Argentina and the European Union). We, however, demonstrate theoretically and empirically that these countries should instead look to the opposite end of the exchange rate spectrum and adopt a flexible exchange rate because it would provide greater macroeconomic stability in the face of capital flow and export demand shocks, especially if the fixed exchange rate regime has a nonzero probability of collapse.4 To illustrate this argument, consider Mexico’s recent experience. Over the last twenty-five years, it has had a series of controlled—fixed, crawling peg, dual and target zone—exchange rate regimes, all of which ended in crises and collapses.5 Each of the major crises over this period—August 1976, February and March 1982, July to November 1985, November 1987 and December 1994—was followed by a significant decline in economic growth (see Fig. 6). Although the factors responsible for these collapses have been described in detail elsewhere, it is important to note that external shocks to goods and asset markets in the form of oil price changes, capital flow shifts or interest rate changes played key roles.6 In particular, the typical boom and bust cycle in Mexico over this period began with a favorable external shock: for example, an increase in oil exports (following a discovery or an oil price increase), a fall in world interest rates or a liberalization of trade or capital flows. This shock was normally followed by large capital inflows, increased fiscal expenditures (typically deficit financed), an expansion of the domestic money supply, higher inflation and an appreciation of the real exchange rate. However, this process eventually became unsustainable, especially if the initial favorable shock was reversed or another adverse shock struck. A smooth adjustment of the real exchange rate, however, was precluded by the government’s commitment to the controlled nominal exchange rate, and the downward stickiness of prices and wages. Instead, the economy was stuck with an overvalued real rate, which generated the expectation of a future devaluation and consequent increase in the price of foreign goods. This, in turn, fueled an import boom and a flight of capital that reduced the foreign reserves of the central bank and eventually precipitated the collapse. Had the government, instead, adopted a flexible exchange rate, the favorable external shock and the resulting capital inflows would have appreciated the exchange rate, thereby reducing aggregate demand and the incentive to borrow. Similarly, when circumstances reversed, a depreciation would have occurred, thus avoiding the severe contractionary effects of an exchange rate collapse. The rest of the paper is divided into two parts. First, a theoretical model is derived under assumptions appropriate for countries like Mexico that have experienced such crises. Using the model, we show that in terms of minimizing the variability of real output, a flexible exchange rate regime generally dominates a fixed exchange rate that may collapse, as well as a permanent fixed regime (like a currency board). In the second part, a counterfactual empirical exercise is performed using data for Mexico that indicates that had Mexico adopted a flexible rate over the last 20 years rather than a series of controlled exchange rate regimes, the volatility of real output would have been substantially less.