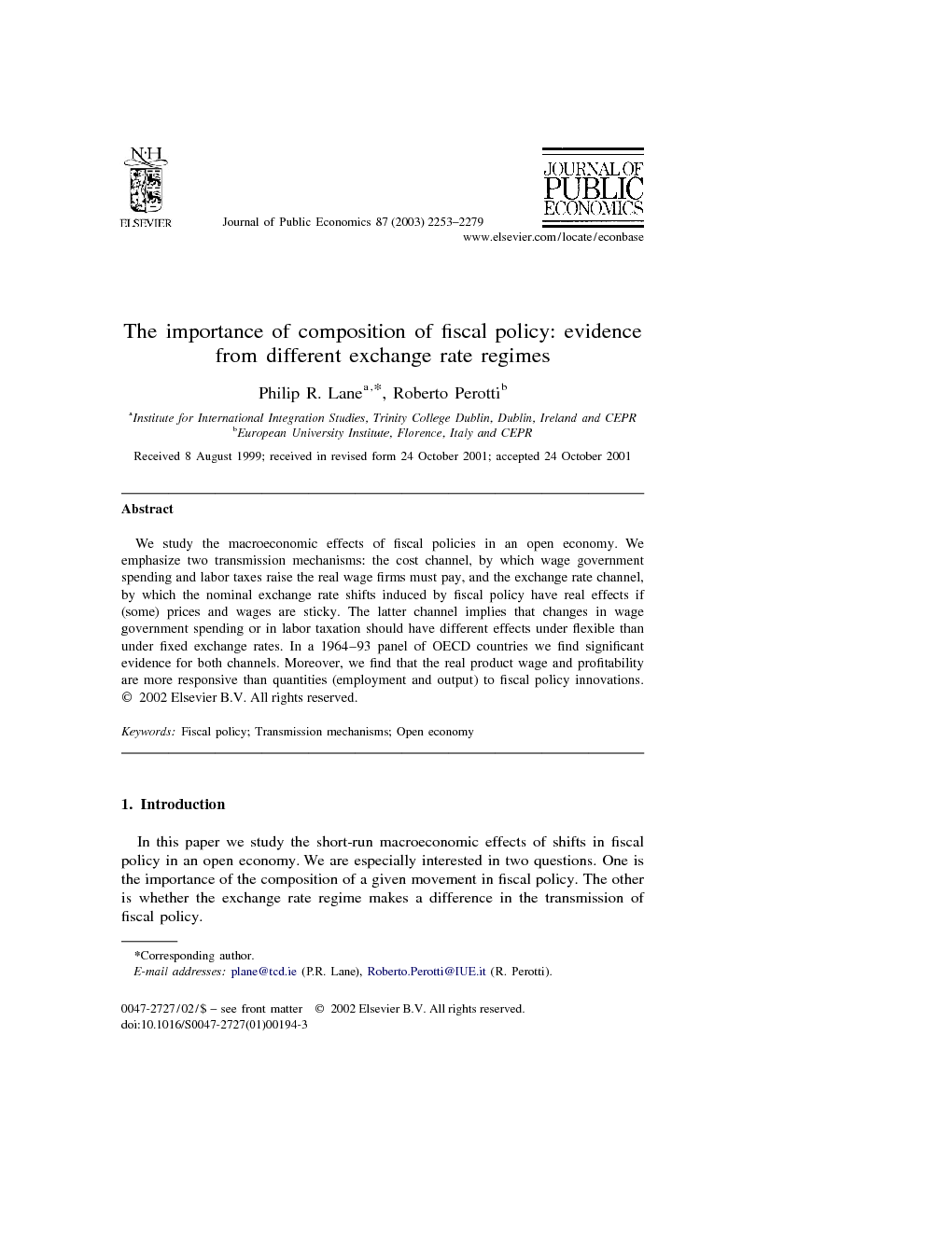 We study the macroeconomic effects of fiscal policies in an open economy. We emphasize two transmission mechanisms: the cost channel, by which wage government spending and labor taxes raise the real wage firms must pay, and the exchange rate channel, by which the nominal exchange rate shifts induced by fiscal policy have real effects if (some) prices and wages are sticky. The latter channel implies that changes in wage government spending or in labor taxation should have different effects under flexible than under fixed exchange rates. In a 1964–93 panel of OECD countries we find significant evidence for both channels. Moreover, we find that the real product wage and profitability are more responsive than quantities (employment and output) to fiscal policy innovations.

In this paper we study the short-run macroeconomic effects of shifts in fiscal policy in an open economy. We are especially interested in two questions. One is the importance of the composition of a given movement in fiscal policy. The other is whether the exchange rate regime makes a difference in the transmission of fiscal policy. Research on recent fiscal consolidations in the OECD has highlighted the importance of composition in the success and persistence of fiscal reforms. As argued by Giavazzi and Pagano (1990) and formalized by Bertola and Drazen (1993), the consolidations in Denmark and Ireland in the mid-1980s were associated with a macroeconomic boom, rather than a recession, because they were mainly based on expenditure cuts rather than tax increases. Alesina and Perotti, 1995 and Alesina and Perotti, 1997a and Alesina and Ardagna (1998) show that, controlling for the size of the budget deficit reduction, those adjustments that were implemented by cutting government transfers and public wages have been much more persistent than those achieved by increasing taxes. One reason the composition of a fiscal reform may be important is that it matters for the macroeconomic effects of a shift in fiscal policy. We start from the simple observation that, to different degrees, all industrialized countries are open economies: therefore, an understanding of how fiscal policy affects the tradable (here, manufacturing) sector is crucial for an understanding of the overall macroeconomic effects of fiscal policy. We consider four key indicators of the performance of the tradable sector: employment, output, the real product wage, and profitability. Our focus on these variables is motivated by the observation that the labor market is a key channel by which fiscal policy movements affect the non-government sectors of the economy. Even if the tradable sector does not rely on the domestic economy as a source of final demand, it must compete with the non-traded sector (including the government sector) for non-traded factors such as labor. For instance, an increase in government employment or wages shifts out the aggregate demand for labor and causes upward pressure on economy-wide wages. Similarly, the workings of the labor market determine the extent to which increases in labor taxes are shifted onto firms in the form of higher pre-tax wages. In turn, higher labor costs induce firms to scale back the levels of employment and output and depress profitability. This cost channel is a primary mechanism by which fiscal policy affects the performance even of sectors that sell exclusively to foreign customers and hence are insulated from the level of aggregate demand in the domestic economy. In the presence of sticky prices or wages, fiscal policy affects macroeconomic performance via a second channel, the exchange rate channel. For instance, an increase in government spending that generates nominal appreciation hurts the profitability of firms in the traded sector if they face exogenous foreign currency prices and domestic nominal wages are not fully flexible. We investigate this issue formally by conditioning responses to fiscal policy shifts on the exchange rate regime in place in each country in each time period.1 We construct a panel data set of up to seventeen OECD countries for the period 1964–1993. In studying the composition of fiscal policy, we concentrate on government spending on goods and services on the expenditure side, and distinguish between its wage and non-wage components. On the revenues side, we consider labor taxation (i.e. personal income taxes, social security taxes, and payroll taxes). We show that the distinction between the various parts of the budget turns out to be crucial. Previewing our empirical results, the most important finding is that increases in wage government spending on goods and services raise the real product wage and depress profitability in the traded sector. Moreover, the effects on the real wage and profitability are significantly larger under a flexible exchange rate regime. With a few exceptions, that we note in due course, these and other results are consistent with the model of partial wage and price stickiness that we present in Section 2 below. To the best of our knowledge, the previous open-economy literature has not emphasized the composition effects of fiscal policy or jointly examined the cost and exchange rate channels. A number of papers are antecedents to various aspects of our contribution. Helpman, 1976 and Helpman, 1977 studies the crowding out effect of government spending in the non-traded sector on the level of production in the traded sector. De Gregorio et al. (1994) and Froot and Rogoff (1991) find evidence that the level of aggregate government consumption influences the relative price of tradables to nontradables. Alesina and Perotti (1997b) study empirically the effects of fiscal policy on relative unit labor costs, and the dependence of these effects on the degree of unionization of labor markets. Mendoza and Tesar (1998) emphasize the supply side effects of tax policies in open economies. Frenkel et al. (1996) focus on the fiscal deficit, and study theoretically wealth and intertemporal substitution effects in the context of a two-country, two-period model. Stockman and Ohanian (1993) also write a model with partial flexibility. Finally, we note that our results on the open-economy dimension are complementary to other empirical studies on the effects of fiscal policy. In panel regressions on a similar sample to that used here, Giavazzi and Pagano, 1996 and Giavazzi et al., 1998, and Perotti (1999) investigate the response of private consumption to changes in various components of the government budget; Alesina et al. (in press) study the response of investment. The plan of the paper is as follows. As a foundation for the empirical work, Section 2 presents a simple model of fiscal policy in an open economy, formalizing the cost and the exchange rate channels discussed above. Section 3 develops the solution of the model under full price and wage flexibility first and then under price and wage stickiness. Section 4 discusses the data and the econometric specification. Section 5 presents the empirical results, while Section 6 discusses their robustness: the relevant tables for this robustness exercise can be found on this journal’s web site.2 Section 7 concludes.

In this paper, we have emphasized the short-run macroeconomic effects of different types of fiscal policy. We distinguished between two transmission mechanisms: a cost channel and an exchange rate channel. For both effects to be operative, wages and prices must display partial flexibility with respect to fiscal policy. If wages and prices are fully flexible, the exchange rate channel is inoperative; if wages and prices are fully rigid, there are no short-run cost effects from fiscal policy. On a panel of OECD countries from 1964 to 1993, we found that increases in wage government spending raise the real product wage and depress profitability in the traded sector. These results indicate the operation of a significant cost channel in the transmission of fiscal policy. Moreover, the positive impact on the real product wage and the negative impact on profitability are significantly larger under a flexible exchange rate regime, consistent with the presence of an exchange rate channel. That both the cost and the exchange rate channels are active suggests that partial flexibility in wages and prices is a good description of the nature of adjustment to fiscal shocks in the economies we study in this paper. That fiscal policy has a smaller impact on quantities than on the real product wage and profitability suggests that the pass-through of higher costs into prices is limited, either because prices are largely sticky or it is not optimal for firms to maintain a constant markup in the face of cost increases. The weaker results for taxation may be partly attributable to measurement problems. However, since tax policy only influences the exchange rate via its impact on the level of private sector output, the small quantity responses we observe also imply small effects on the exchange rate and small differences across exchange rate regimes. Understanding better the impact of tax policy on exchange rates represents a challenge for future research. In line with our theoretical prior, non-wage government spending on goods and services has only minor effects on the traded sector. Thus, this paper has provided evidence that the composition of a shift in fiscal policy is important in determining its impact on the traded sector. This is relevant in the design of fiscal adjustment programs. A fiscal reform that takes the form of a reduction in wage government spending will crowd in an expansion in traded output and employment and improve the level of profitability. A reform that consists of an increase in labor taxation will have the opposite effect on the traded sector. A second message is that the choice of the exchange rate regime matters for the impact of fiscal reforms on key macroeconomic variables. For instance, under flexible exchange rates, a reduction in wage government spending doubly improves profitability in the traded sector: not only do labor costs fall but firms in the traded sector also benefit from the induced exchange rate depreciation. Our study has focused on the impact of fiscal policy on the tradable sector of the economy. The tradable sector is especially interesting, since we have shown that domestic fiscal policy can importantly influence an economy’s international competitiveness, by altering unit labor costs and profitability. In future work, it would be interesting to also examine the impact of fiscal policy on the private nontradable sector, under alternative exchange rate regimes, in order to gain a sense of its overall impact on aggregate macroeconomic indicators. The relative importance of the two sectors will obviously vary in line with country size, with our results for the tradable sector being most critical for the smaller, more open economies.