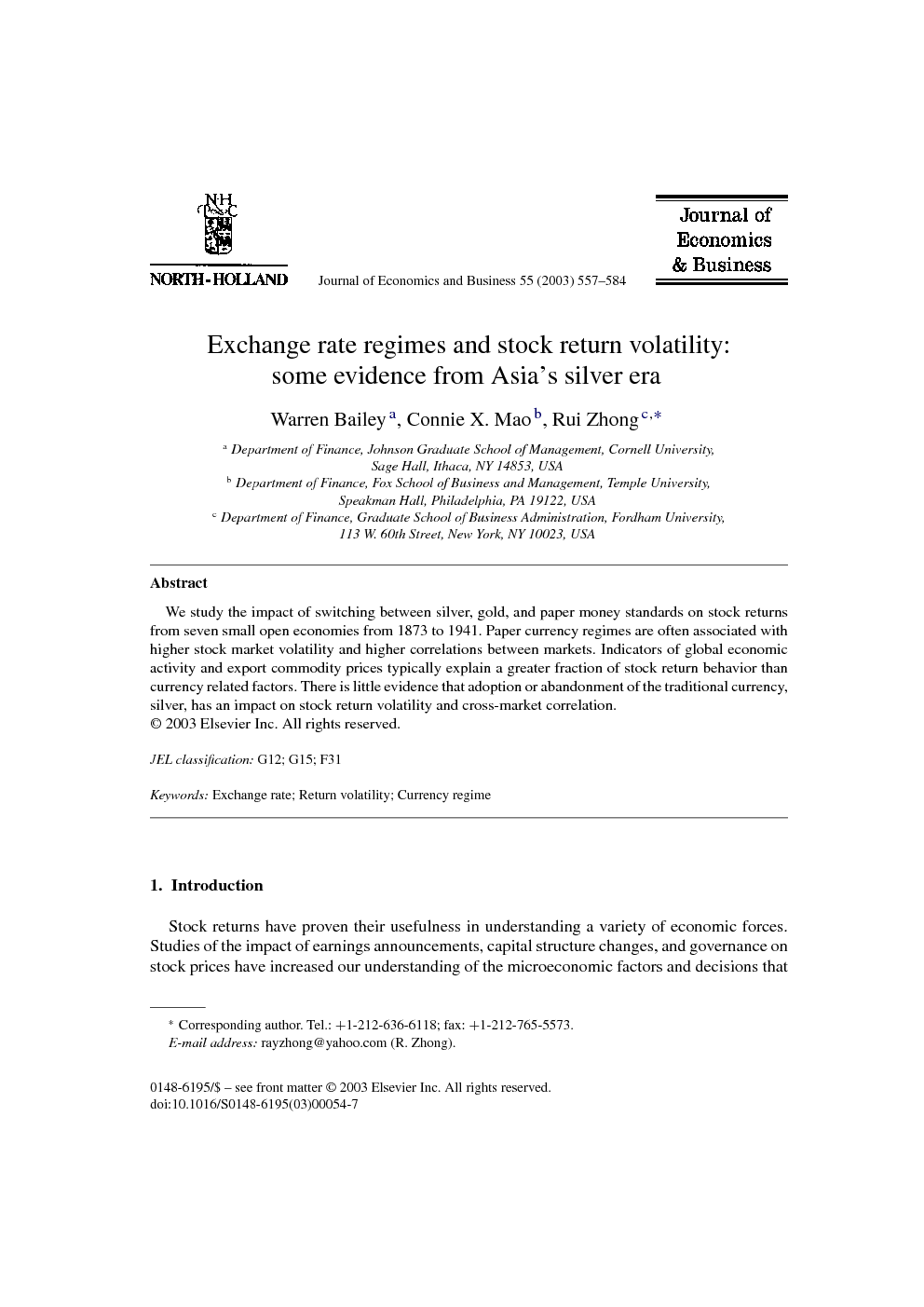 We study the impact of switching between silver, gold, and paper money standards on stock returns from seven small open economies from 1873 to 1941. Paper currency regimes are often associated with higher stock market volatility and higher correlations between markets. Indicators of global economic activity and export commodity prices typically explain a greater fraction of stock return behavior than currency related factors. There is little evidence that adoption or abandonment of the traditional currency, silver, has an impact on stock return volatility and cross-market correlation.

Stock returns have proven their usefulness in understanding a variety of economic forces. Studies of the impact of earnings announcements, capital structure changes, and governance on stock prices have increased our understanding of the microeconomic factors and decisions that affect firms. Studies of the associations between stock returns and macroeconomic indicators have increased our understanding of the impact of economic forces and policy choices on the economy. Stock market returns also contribute to our understanding of how exchange rates affect corporate performance, competitiveness, and economic activity. Starting with the work of Jorion, 1990 and Jorion, 1991, a number of authors have measured the exchange rate exposures of U.S. stock and industry portfolio returns.1 Studies of other countries often indicate more significant exposures than for the U.S., while specific U.S. industries sometimes display a particularly significant impact of exchange rates on stock returns.2 There is also evidence that exposure to exchange rate risk may earn a risk premium in equity markets.3 Evidence on exchange rate regimes and stock returns is scarce. Bodart and Reding (1999) find that European monetary cooperation tends to decrease European bond market volatility and increase correlation between bond markets. There is, however, much less impact on volatility and correlations in European stock markets. Bartov, Bodnar, and Kaul (1996) find that the beta and total volatility of U.S. multinationals increases after the 1973 breakdown of the Bretton Woods agreement. Hardouvelis, Malliaropulos, and Priestley (1999) find convergence in European equity markets as the 1999 adoption of the Euro approached while De Santis, Gerard, and Hillion (2002) report shifts in the nature of the currency risk premium. The macroeconomics literature suggests that a pegged currency can increase economic volatility (Frenkel & Mussa, 1980) because there is no longer a fluctuating exchange rate to absorb foreign economic shocks. Empirical studies (Artis & Taylor, 1994 and Fratianni & von Hagen, 1990) find that the volatility of domestic economic indicators declines after adoption of the European Monetary System or that there is no consistent association between economic volatility and currency regime (Baxter & Stockman, 1989, Flood & Rose, 1995 and Rose, 1995). Our paper examines the impact of exchange rate regime changes on conditional volatilities and cross-correlations of stock prices from China and other Asian economies from 1873 to 1941. Our sample of seven economies switched from a common currency, silver, to gold or paper at different times. Thus, the number and variety of regime switches during this period offers a unique opportunity to study the significance of exchange rate regime changes. Furthermore, international trade and investment flourished during this period. In particular, the seven economies we study were heavily geared towards exporting minerals, agricultural products, and light manufactures. Thus, this period permits us to study the impact of exchange rate regime changes during a long time period comparable to the modern era in many ways. The paper is organized as follows. Section 2 summarizes the monetary regimes in force in our sample countries during the period under study. Section 3 outlines the methodology and data set while Section 4 presents empirical results. Section 5 is a summary and conclusion.

We have examined conditional variances and cross-market correlations of seven national stock index return series during an interesting time period when these economies switched between silver, gold, and paper money standards at different times between 1873 and 1941. We find that paper money regimes are more likely to be associated with heightened stock market volatility and correlation between stock indexes. There is little evidence that stock markets drew closer under the traditional silver regime. The finding that cross-market correlations are higher during paper regimes, and correlations between index returns and China’s exchange rate weaken when China was on paper, suggests that conditions and events beyond the currency system affect the variances and correlations we study. Most telling are our results comparing the explanatory power of currency versus non currency factors over stock returns. Currency factors are dominated by indicators of global economic activity and, in the case of Southeast Asian economies, prices for agricultural and mineral commodities destined for export. More generally, periods of paper currency regimes often coincide with the economic, political, and military upheavals of the First World War and the beginning of the Second World War. Our final set of results suggests that such events can indeed contribute to conditional volatility in some economies. Thus, the heightened volatilities and correlations sometimes observed during these periods may be due to fundamental conditions beyond the nature of the monetary system. Furthermore, we must note that the choice of currency regime can be endogenous to more general macroeconomic conditions and policies. Compared to the EMU in which currency regime shifts affect all member states at the same time, our empirical setting allows us to study seven countries that switch currencies at different times. This helps address the problem of common non-monetary fundamentals driving results. Substantial differences in the economic conditions and policies across our seven economies also help us isolate underlying causal factors. For example, China and HK switched from silver to paper at the same time but Fig. 1 shows that the behavior of conditional volatility across the two economies is different. However, the Hong Kong dollar was pegged to a stable paper currency, the pound, while the Chinese dollar was subjected to massive money-printing and subsequent runaway inflation. This demonstrates how paper money regimes can vary widely in terms of their quality and impact. The adoption or abandonment of a common currency standard is an important aspect of globalization and economic integration, as the continuing development of European monetary arrangements illustrates. At the same time, the record of research on stock returns and currency conditions indicates that it is often difficult to distinguish the impact of currency fluctuations and currency regimes from more fundamental economic forces. Our study illustrates how data from a novel institutional setting can help untangle such effects and provide fresh empirical evidence. In a related vein, economic crises in Asia and, most recently, in Argentina indicate that merely pegging a currency to the dollar is not sufficient to overcome the underlying problems in an economy. Thus, we are reminded that, for both policy makers and researchers, currency regimes must be understood in the broader context of underlying economic and political conditions.