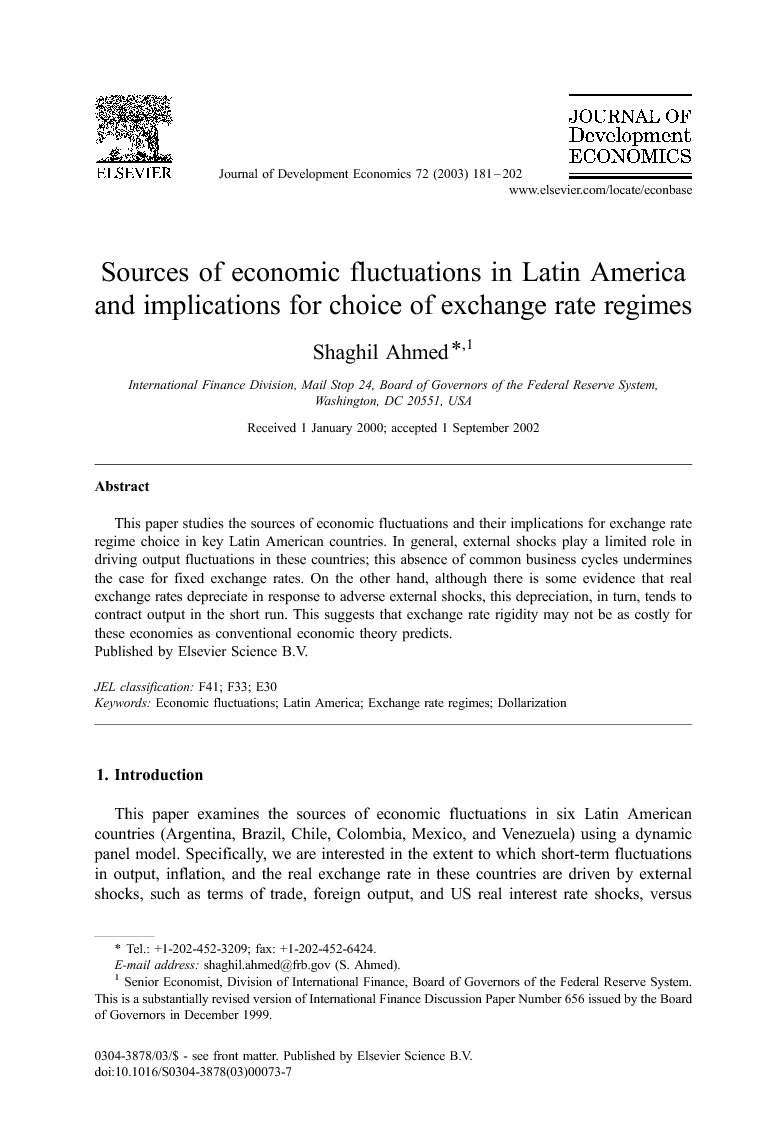 This paper studies the sources of economic fluctuations and their implications for exchange rate regime choice in key Latin American countries. In general, external shocks play a limited role in driving output fluctuations in these countries; this absence of common business cycles undermines the case for fixed exchange rates. On the other hand, although there is some evidence that real exchange rates depreciate in response to adverse external shocks, this depreciation, in turn, tends to contract output in the short run. This suggests that exchange rate rigidity may not be as costly for these economies as conventional economic theory predicts.

This paper examines the sources of economic fluctuations in six Latin American countries (Argentina, Brazil, Chile, Colombia, Mexico, and Venezuela) using a dynamic panel model. Specifically, we are interested in the extent to which short-term fluctuations in output, inflation, and the real exchange rate in these countries are driven by external shocks, such as terms of trade, foreign output, and US real interest rate shocks, versus other economic disturbances (which are identified as real exchange rate, domestic output, and domestic price level shocks). The primary goal here is to examine the implications of our results for the choice of appropriate exchange rate regimes in developing countries, a topic of much recent debate. To this end, we address the following questions. (1) Does the evidence support the hypothesis that these Latin American countries form an optimal currency area with their main trading partners, a prominent one of which is the United States? In other words, are the business cycles of these countries related to those of their trading partners, including the United States, in such a way that the monetary policy being pursued by these trading partners at any particular time would happen to be the right policy for these countries also? (2) Historically, have recessions in these countries been caused more by adverse external shocks or adverse domestic shocks? (3) Historically, have real exchange rate movements in these countries been important in promoting appropriate adjustments of the economy to external and domestic shocks? A near consensus seems to be emerging in the literature that emerging-market countries should consider only “polar” regimes of a fully floating or rigidly fixed exchange rate, rather than more mixed systems such as adjustable pegs, which have been particularly prone to ending in crises (see, for example, Fischer, 2001). However, it remains controversial which of the two polar regimes—rigidly fixed or fully floating—is more appropriate; Frankel (1999), in particular, has emphatically argued that no single exchange rate regime is appropriate for all countries at all times. The answers to the questions posed above would seem to be at least some of the relevant key considerations in making the right choice for the Latin American countries. Although there has been no dearth of recent debate on these questions in the context of developing countries in both policy and academic circles, there has been relatively little formal empirical analysis that could be used to provide a quantitative assessment, which motivates this paper. The remainder of the paper is organized as follows: Section 2 provides a selective review of the previous related literature; Section 3 lays out the empirical methodology and discusses the data; Section 4 presents and interprets the empirical results for the benchmark model; Section 5 discusses some alternative empirical models and examines robustness; and, finally, Section 6 provides a summary of the results and the main conclusions.

Recently, there has been renewed interest with respect to emerging-market countries in the age-old question of the appropriate form of exchange rate arrangements. In particular, the dollarization proposal has been vigorously debated. What can we conclude, based on the empirical results of this study, about the desirability from a Latin American perspective of moving to very rigid forms of exchange rate systems, including dollarization? If we take these panel results as representative of the responses of Latin American economies to various shocks, the results are mixed, suggesting no strong, clear case against or in favor of rigidly fixed exchange rates. On the one hand, the lack of causality running from the US business cycle to the Latin American business cycles, together with the cyclical fluctuations that would result in Latin America from US real interest rate changes, suggest that rigidity in exchange rate arrangements is not a good idea. On the other hand, the results that real exchange rates have historically not been very strongly responsive to external shocks, and that devaluations have been contractionary in the short run, seem to indicate that getting rid of exchange rate flexibility may not be as costly as conventional economic theory suggests. There are, however, some caveats to using a data set that includes failed fixed exchange rate regimes to make the second conclusion above. Although this paper represents a start and attempts to control for external shocks and very large one-time movements in exchange rates, more work needs to be done to sort out whether a “pure” form of exchange rate flexibility might prove to be more useful for emerging-market economies.