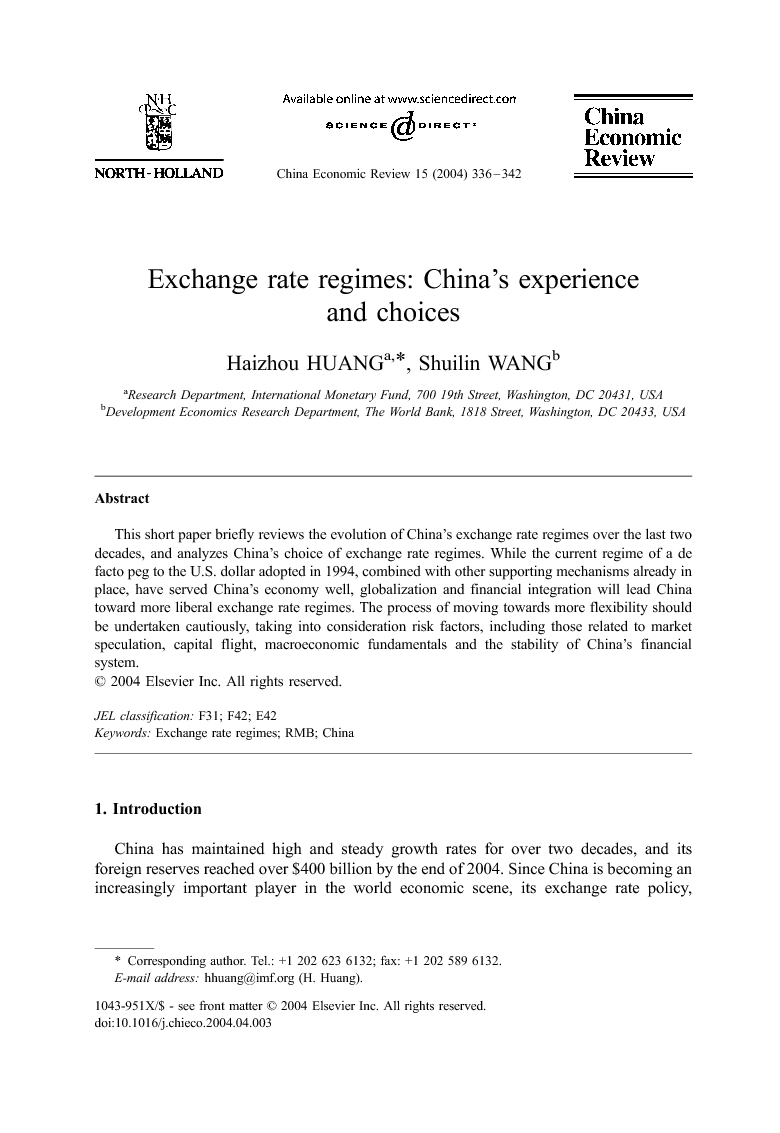 This short paper briefly reviews the evolution of China's exchange rate regimes over the last two decades, and analyzes China's choices of exchange rate regimes. On balance, it seems desirable for China to maintain the managed float in the short run. Globalization and financial integration will lead China toward more liberal exchange rate regimes. But the process of moving towards more flexibility and full convertibility should be cautious, in particular taking into considerations of risks related to China's financial system stability, capital flight, and macroeconomic fundamentals.

Moving from the status quo, there are two possibilities: to increase flexibility, i.e., from an intermediate regime to free floating, or to move toward stronger institutional commitment, i.e., to currency board or monetary union.3 As a general direction, because financial globalization will further integrate China to the international financial system, China should move toward to more liberal regimes. But there are reasons to be cautious as well. First, it is interesting to note that propositions of increasing flexibility were brought out during the Asian crisis to help fight speculative pressures against exchange-rate targets in Thailand, Korea, Indonesia, Russia, and Brazil, where the attempts ended in costly crashes. Second, after the Asian crisis, many Asian economies went back to peg their currencies to the dollar. As these countries are China's main trading partners, their choices of exchange regime also affect China's choice. Third, China's weakness in its fundamentals, its less liquid financial markets, and weak financial institutions can give rise to both undershooting and overshooting risks when the band widens. Like other developing countries, China would face risks of financial asset bubbles when hot money enters on the one hand, as well as risks of speculative attacks and crashes when capital inflows suddenly stop (Calvo, 2002) and a serious problem of capital flight materializes. Indeed, Gunter's (2004) estimate of capital flight from China—over US$100 billion per year during 1998–2001—questions the effectiveness of China's capital controls. An alternative in the direction of increasing flexibility is that RMB move to a new basket peg. as long as the United States remains the most important trading partner for China and for China's Asian trading partners, and the dollar continues to be the main vehicle currency, it seems to be in China's economic interests to maintain the managed float exchange rate regime with implicit peg to the dollar. The “revived Bretton Woods system” argument also calls for caution in adopting a new basket peg. The other direction is to move toward stronger institutional commitment to fixing the exchange rate, such as adopting a currency board arrangement. Although currency board has successfully weathered the storms in Hong Kong, it failed in Argentina. None of large economies has adopted such a rigid regime. A related suggestion on this line is the discussion over the last several years on the Asian dollar, which would be a common currency like the euro adopted by the 12 European countries. This regime would be the strongest fixed rate among member countries, but may not be suitable for China and its neighbors even in the medium run because of divergence in their development levels. On balance, it seems desirable for China to maintain the managed float regime, with the exchange rate implicitly pegged to the dollar in the short run. Globalization will push China toward further financial integration, thus China should move decisively towards increasing flexibility. The process of moving towards more flexibility and to full convertibility should be cautious. As long as expectations for RMB appreciation and increasing flexibility remain strong in the market place and hot money continues to enter China, it is rather difficult to increase flexibility. Under these circumstances, should China widen the band to, say 5%, this may induce more speculations for an even larger band, say of 10%. This process poses many risks, as speculations for appreciation and increasing flexibility can induce a large amount of hot money into China, causing financial bubbles. When the bubbles are bigger enough, foreign investors may start to cash in, capital inflows suddenly stop, capital flight starts, and a self-fulfilling currency crisis can be triggered, as shown in crises in Latin America. A better time would be when the markets are quieter.4 China should avoid the mistakes of other developing and emerging market economies in rushing into opening their capital accounts and converting their currencies, which often lead to currency and banking crises quickly after the hot money leaves these economies. Moreover, as it still has a long way to go before building up a strong, well-supervised and regulated financial system, China should further enhance its financial stability. Once its financial system stability is substantially enhanced, China will gain a new capacity to increase its exchange rate flexibility further, and finally move to the free floating regime with levels of exchange rates supported by strong fundamentals.